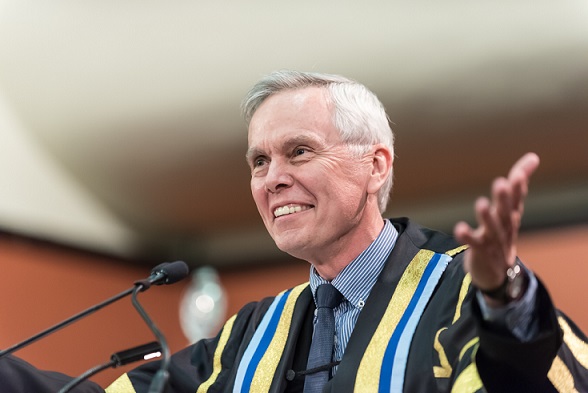 Report outlines Mulroney’s vision for the coming year, how he views the past one, and some changes to USMC student life, academics, organizations

Two weeks ago, on Wednesday, September 20, President David Mulroney presented his Annual Report to the University of St. Michael’s College (USMC) Collegium in Elmsley Hall’s Charbonnel Lounge. A day later, Mulroney’s office released the report on the USMC website. Mulroney’s report outlines some of the changes to student life, academics, and clubs/organizations that USMC students can expect for this 2017–18 year.

The document, alongside his presentation, also provides students with some insight into the work USMC administration did in the 2016–17 academic year, which saw periods of tense conflict between USMC leadership and USMC’s largest student governance body, the St. Michael’s College Student Union (SMCSU).

Mulroney views the past year as one of revival for the undergraduate experience at USMC. “My second year (2016/17) has been focused on reanimating and reinvesting in undergraduate student life,” he writes, a process he says began in the 2015–16 academic year with the hiring of several key personnel to the college’s administration, including Principal and Vice President Randy Boyagoda (The Mike’s own faculty adviser).

Another component Mulroney noted in his 2016 address was the introduction of a hard liquor ban in USMC residences, and the prohibition of served alcohol at student-sponsored events.

Mulroney begins his reflection on the previous academic year by listing his administration’s e orts to revitalize the USMC undergraduate experience. Points of interest include: the hiring of six new professors and two post-docs, the introduction of the Gilson Seminar as the SMC One program, planning of projects for the renewal of Brennan Hall, and the reconstruction of the governing principles of student government at USMC.

Mulroney has already entered the final term of his three-year contract to serve as the president of USMC (his term officially expires in June 2018). Efforts by a Presidential Search Committee to find his successor are currently underway. These included soliciting input from students in the form of a survey sent around in early September.

Mulroney describes the hiring of six new professors and post-docs as a demonstration of the college’s commitment to its academic programs, as well as a response to the criticism that USMC had failed to invest enough in its academic programs. The new hires should provide the college’s sponsored programs with greater stability, as they would need to rely less on an ever-changing group of sessional instructors.

Mulroney then goes on to highlight the work of Boyagoda over the past academic year to revitalize the SMC One program. His efforts came to fruition this fall with the introduction of the Gilson Seminar, which Mulroney claims had the most competitive enrolment of all the College One programs.

Mulroney also talks about improving the USMC student experience by developing the student spaces of USMC. Over the course of 2017–18, the college will focus on renovating Brennan Hall and the Coop and moving the Registrar’s Office to a more “student-friendly location.”

Perhaps the most tumultuous and divisive period of Mulroney’s tenure thus far contained his handling of the various 2016–17 SMCSU scandals. This period included both scandals that occurred in late 2016 and involved the then present SMCSU administration, as well as USMC’s choice to only partially disclose the results of an investigation into the SMCSU’s gross financial mismanagement and poor governance dating back over the previous decade.

These tensions ultimately resulted in the disbandment of SMCSU for the latter half of the 2016–17 academic year. USMC has gone without a functioning student union ever since.

Mulroney also announced that USMC has created a new Student Society Leadership Policy that has since become effective. He also mentioned that the college’s administration will continue to oversee the transfer of the SMCSU’s student levy to the SMCSU. He also noted that SMCSU will resume operations this fall, following their upcoming elections. This appears to be good news for student government at USMC.

The report also touched on plans to think carefully about establishing “an interim relationship” between USMC and the Pontifical Institute of Medieval Studies (PIMS), which remains in limbo given that its previous adjoining contract has now expired, and USMC efforts to revamp its website to make it more student friendly, which Mulroney hopes to be ready to unveil “sometime over the next few weeks.”

Mulroney concluded his address by stating his priorities for the remainder of his term as president. He aims to ensure that the college creates an accountable and transparent environment regarding money management, continues to increase fundraising for investment in teaching and student experience, and helps ensure St. Mike’s becomes a place where students can ask “what it is to be a human fully alive, what contributes to happiness, [and] how we deal with some of the big questions that, increasingly, our society finds hard to answer, and must be discussed.”