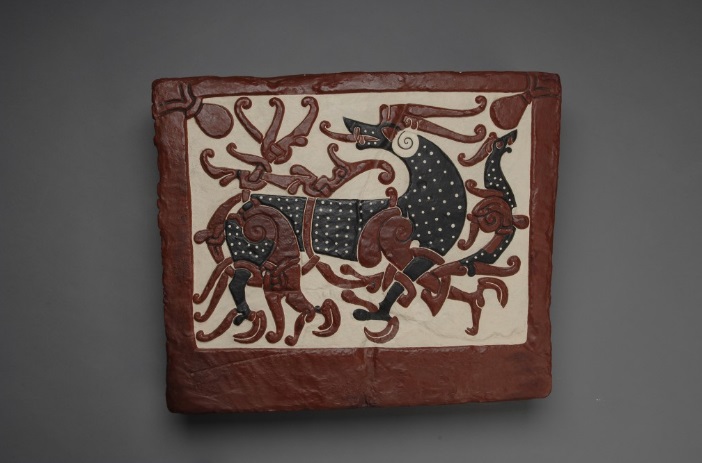 The ROM’s Exhibit on Vikings

The ROM’s new Vikings: The Exhibit debunks any inquiries one might have about the brazen age. The gallery is filled with numerous artifacts revealing religious, cultural, and voyaging practices of the Vikings. The interactive sections of the exhibit allow patrons to hold a replica sword, and adjust movable horns on a replica helmet. I found the large information wall explaining the meaning of “Viking” to be a captivating opening piece to the exhibit. I learned that the Vikings did not refer to themselves by this name unless they were literally out on “a Viking”, which was the old Norse word for trade trip or raid. The Vikings lived across Scandinavia, including the countries of Denmark, Norway, Sweden, and Finland. As I wandered through the exhibit, I came across three pieces I found particularly interesting: the picture stone illustrating the living and the dead; the prestigious weapons; and the reconstructed Viking boat and Krampmacken’s sail.

The Viking Age in Scandinavia, around the year 750, was a time of religious transition where Christianity became an established faith in several parts of Europe. Around the year 1100, Christianity had become the only official religion. Though Christianity was the dominant state religion, Old Norse traditions and practices were integrated with the state religion, including practices of communal cult activities and rites. The Old Norse polytheistic tradition believed in both male and female gods, which contrasted with Christianity’s monotheistic idea of salvation. As a method of combing both beliefs, jewellery ornamentation and rune stones combined Norse and Christian symbols. This integration suggested a harmonious balance between the new religion and the Old Norse practices.

On display at the exhibit, a large picture stone from Gotland, Sweden, depicts a scene from the journey to Valhalla. The grey stone is about seven feet tall, and three feet wide; it stands erected with dark grey engravings illustrating mythical beliefs about the living and the afterlife. At the top of the stone, there is a battlefield which depicts warriors fighting with swords. There is a funeral scene shown below the stone, where eagles and ravens feed off the dead bodies. The second scene depicts a dead warrior arriving in Valhalla, as he is followed by a group of mourning friends. Though the death stone’s illustrations may seem obscure to the modern viewer, people of the Viking Age would be able to recognize such depictions with solemn appreciation.

Viking warriors were identified by the weapons they possessed such as swords, spears, and axes. Most weapons were used for functional purposes, with few exceptions of decorative pieces. As a dedication to Viking myths, weapons were often given names to reflect the specific weapons used by the gods. The most prestigious weapon was the sword, as it stood boldly with embellished blades and handles. Spear sockets were made with silver, copper, or brass wires that were hammered into groves in the iron surface. These spears were decorated with geometric patterns and engravings. The exhibit had an imitation sword that patrons could lift. I lifted the sword and must admit it was heavier than I thought. This imitation was meant to emulate a battle sword that would have served as a functional purpose, as it lacked decoration and embellishment.

While browsing the weapons section of the gallery, I came across a fun fact about the original horned helmet. Often, the horned helmet is a symbol associated with the Vikings in our modern society. I learned that the horned helmet truly made its debut in Richard Wagner’s opera The Ring Cycle in 1876. Though the opera is unrelated to the Viking Age, the performance established an association between horns, Norse mythology, and the Vikings. Despite the horned helmet’s fictitious origin and its historical inaccuracy, it still remains a prominent symbol in the Viking culture.

Lastly, the Viking boat that was reconstructed is a visiting piece from the Swedish History Museum in Stockholm. This reconstruction is made from the remaining wooden timbers of the boat, as it is not uncommon for organic material to rot away. I also came across a reconstruction of Krampmacken’s sail. What I found most interesting is that sails have not survived from the Viking Age; any information we come across is solely based on illustrations on carved stones, fragments of woolen fabric, and experiments with sails on constructed ships. By referring to the images on the Gotland stone, this Krampmacken’s sail could be accurately reconstructed. Overall, this exhibit proved to be filled with accurate information which allows visitors to truly learn about what Vikings and their beliefs were, rather than believe inaccurate historical facts.