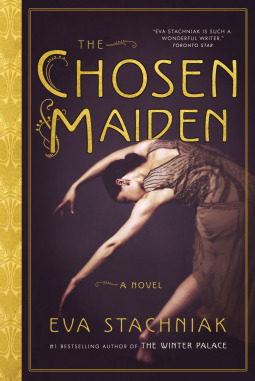 Eva Stachniak, the Polish-Canadian award-winning and internationally bestselling author, recently debuted her latest novel, The Chosen Maiden, at U of T’s Robert Gill Theatre. Set in the world of Ballets Russes, The Chosen Maiden tells the story of Bronisława Niżyńska (“Bronia”), a talented Polish-born ballerina living in the shadow of her older brother Vaslav Nijinsky: Russia’s greatest legendary dancer. Bronia struggles with a body she perceives as less-than-ideal and against social constraints placed on her gender, causing her to work much harder to be proven worthy as a dancer. It is Bronia’s discipline of, dedication to, and talent for ballet that propels her to perform with the prestigious, old-world Mariinsky Ballet: Russia’s highest stage. Amidst the outbreak of the Great War, however, this change forces Bronia to make difficult choices in her career and love life. She is confronted with choosing between the traditional and the innovative, between safety and vulnerability. By means of Stachniak’s refined prose, readers fly between the worlds of early 20th century St. Petersburg, Kiev, London, and Paris, exploring each city’s respective world of emerging modern art. It is in these international centres that she interacts with legends such as Anna Pavlova, Coco Chanel, Serge Diaghilev and Pablo Picasso, and from them Bronia must emerge victorious as a dancer, mother, and revolutionary in a perilous world that seeks her downfall.

When Stachniak isn’t writing, she is a member of the Council for the Support of Polish Studies at the University of Toronto. The Council was established in 1988, when the Canadian Polish Congress organized a committee to prevent the cancellation of Polish history courses at U of T. Since then, the Council has provided financial assistance to secure the professorship and then permanent establishment of The Konstanty Reynert Chair of Polish History, currently held by Professor Piotr Wróbel of Trinity College. With the Chair being fully funded, the Council shifted its gaze to the task of collecting funds to assure the flourishing of Polish studies, literature and culture, which have been offered at U of T since the 1960s. In support of this, the Council continuously organizes lectures and events available to the general public in Toronto and elsewhere, whereby professors are able to acquaint more Canadians of all ethnic origins with Polish history, literature and culture.

Unfortunately, their most pressing need is to ensure the continued financing of all three courses on the Polish language, only two of which are secured by a separate fund; the third, and most advanced course, needs year-by-year financing. They hope to be able to eventually raise sufficient funds to secure that course in perpetuity. And this is where Stachniak’s recent book launch begins to play an important role: all the proceeds from the sale of The Chosen Maiden have been and will continue to be very graciously donated to the Council and the Polish program at U of T.

Despite its financial woes, the Polish program continues to host visiting professors from the University of Warsaw on a turnaround basis, providing students with a real, first-hand encounter with contemporary Polish literature and culture. This year’s visiting professor is Dr. Anna Rabczuk, who has already given talks throughout the year to students and faculty, her next presentation is in collaboration with the Slavic Languages Students’ Union (SLSU) on February 15. The program attracts students from both Polish and non-Polish heritage in its variety of courses offered, clearly a sign of consistent general interest in the multiculturalism prevalent on all U of T campuses.

According to the American Association of Teachers of Slavic and East European Languages, “Polish is the most commonly taught Slavic language after Russian, and is widely available in North American universities both because of Poland’s geopolitical and cultural importance and because of the large numbers and important achievements of immigrants from Poland to North America. Its popularity means that courses in Polish literature and culture are also widely available, and some universities have special programs and institutes devoted to Polish studies.”

U of T offers the largest undergraduate and the only graduate Polish program in Canada, making it the leader in research and instruction in the field. It is essential to maintain and expand the Polish program, as it contributes to the unique and prestigious level upheld by Canada’s leading university.