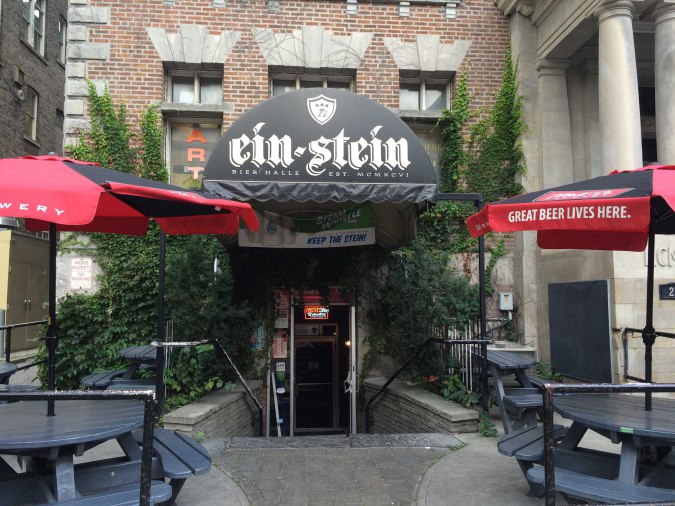 Experiencing a local favourite full of good times and headaches

Its Eye on Toronto’s 2003 winner for best chicken wings, its house beer costs ten dollars a pitcher, its Sunday night comedy hour is more likely to make you cry than laugh — for these reasons and many more, Ein-Steins pub (just off College and Spadina) is my favourite bar in Toronto. This is going to be one of those reviews where it’s impossible to be biased. I live at this pub — I celebrated my last three birthdays in its hallowed halls. So, instead of breaking down what there is to love, I’m going to try and let you experience Ein-Steins through my eyes.

The first thing you notice as you approach the bar is that it lies below street-level, as if it holds great mysteries, but is disguised as a dive bar. The bar’s mystery is its unpredictability: who will be there this night? Will a pool table call, or maybe foosball if you’re feeling bold? Will the house beer give you diarrhea? (Note: the house beer will probably give you diarrhea, but it’s only ten dollars! Just think of it as an excuse to use that extra toilet paper you had laying around.)

Now, where were we? Say it’s a Tuesday. You know that means it’s Toonie Tuesday. Jaeger shots and a selection of appetizers (all different shades of brown) for a toonie each. One John A. Mac later, and you’ve downed three drinks and a well-balanced dinner consisting of a full garlic loaf and some popcorn chicken. You nearly fall off your stool because your pocket’s so heavy! But you’re not worried about that hiccup. You’ve got a beer in hand and eyes on that vacant pool table.

As you squeeze your way back to the tables, you can’t help but take in the sights and sounds of the bar. A Leafs game has just started — they’re already down three goals and no one can look directly at the TV anymore. You hear some people arguing about some nonsense concerning which they both seem to be wrong. As you eavesdrop, you realize you’ve been dragging someone’s jacket with your foot, so you kick it away, tripping on a wayward boot in the act, and spilling some beer on a person’s well-stained jacket. Thankfully, no one notices your display and you arrive at the pool table.

You’re an expert on these tables, tables stained by the glory of great games and beers (mainly beers) over the years. Just like the bar, the tables are generous. The tables slope a little to the west, almost like they’re guiding your balls to the pockets. That generosity translates, as you impress your friends, your girlfriend, or your opponents with your spectacular ability to sink a ball despite having the cue-to-ball coordination of a five-year-old.

The night progresses, the lights dim, but the drinks keep flowing. You sink a ball. You have a drink. A riotous laugh. Drink. Pocket. Laugh. The night was already a classic just because you came to Ein-Steins. Cheap food followed by another round of pool. Getting to know some out-of-towners. Look who just showed up! Yelling and laughs. Pockets and drinks. 9:30 and class? Why are there pins and needles up my whole body? What is happening in my gastrointestinal system? What happened…?