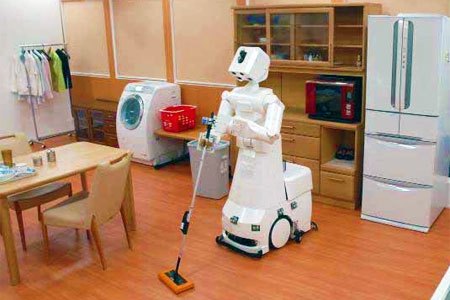 While there were many deals advertised during Boxing Week, one item of particular interest was the Google Home Mini. Google Home Mini is sold as a smart speaker; one that acts as a personal assistant that can react to voice commands. It is connected over Wi-Fi so it can stream your favourite playlists and bring you real-time updates on your favourite sports teams. Additionally, like its competitor the Amazon Echo Dot, it can interface with other smart devices. These robots have been welcomed in many tech enthusiasts’ homes.

Although they may be the most advanced robots that have entered our homes thus far, they are not the first that we have welcomed. Thermostats ensure that our houses cool in the summer and warm in the winter. Similarly, our ovens are robots that bake food at pre-set temperatures. Some homes are equipped with blinds that open and close at the flick of a switch. All old-school robots are good at the jobs they’ve been programmed for and are controlled by separate systems; like a TV set, you have a remote for the TV, one for the audio system, and one for the DVD player. To simplify the TV experience, it would be best to unify the controls to a single controller or better yet, no controller at all.

For the average consumer, the personal assistant is the answer to the universal remote. Be it another human or the Home Mini, give a personal assistant a command and it will do the work. If you’re using the Google device, there may be compatibility issues between the Home Mini and other devices. Currently, it supports over 1,000 smart home devices. The Echo supports many smart devices as well, but also lets you order your favourite gadgets on Amazon.

And if you want to add a more personal taste to these home automation devices, you can turn to the open source market for a DIY personal assistant.  It will take longer to set up the assistant, but it will allow you to access the API, or application programming interface, of different smart devices (some programming knowledge needed). Most manufacturers will describe how you can programmatically talk to their devices and direct them to function.

In some cases no information is provided and you may need to “hack” the devices. One way to go about this is to treat it like one of the dumber devices. If there is a wireless remote, you can clone the signal using a microcontroller which can then react to commands from your personal assistant. With a DIY mentality you can go into the electronics and bypass restrictions placed by the manufacturer.

A plethora of smart devices like smoke alarms, speakers, thermostats, door locks, door bells, wall outlets and lights, have already become commercially available. And very soon many other electronics like kitchenware will become “smart.” It would be easiest to converge all the controls into a single hub. Regardless if it is a Google Home, Amazon Echo, or a homebrew Jarvis, it would be better to start earlier than later.