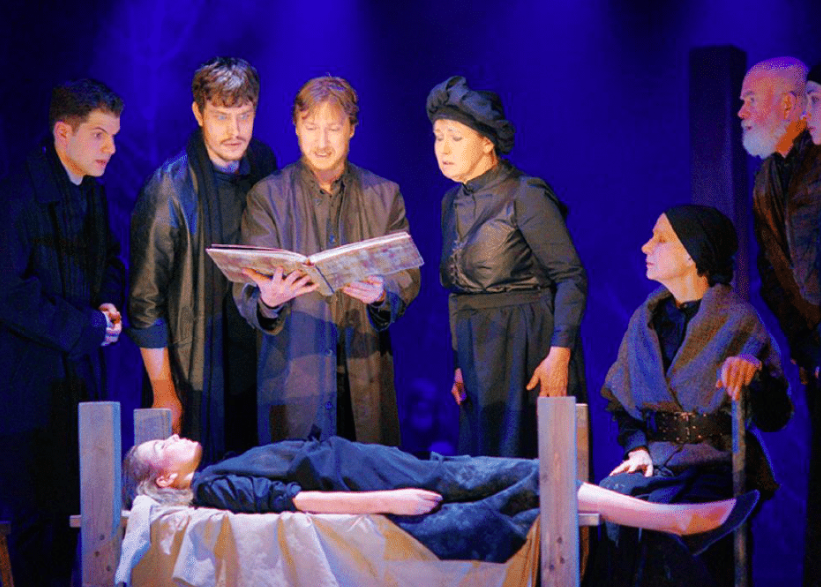 The Enduring Legacy of The Crucible

Michael Rubinstein’s adaptation of The Crucible at Hart House Theatre, which played until February 3, depicts Arthur Miller’s seminal play with the signifiers of fairy tales, thus indicating the eternal relevance of the show’s themes.

The Crucible dramatizes the 1692 wave of accusations, arrests, and executions surrounding the crime of witchcraft in Salem, Massachusetts. It focuses on several girls of the Puritan community who are discovered dancing in the woods at midnight. As this impropriety is discussed and one of the girls faints due to shock, the jealousies and superstitions of various townspeople manifest as a fear of the Devil. The girls avoid punishment for their supposed misdeeds by accusing others of bewitching their minds. Among those whose lives are overturned in the aftermath are John Proctor, played by Jon Berrie, and his wife, Elizabeth, played by Melissa Taylor. When Elizabeth is accused of witchcraft, John must confront his own culpability in order to free either of them. When the wave of vindictive accusations ends, it leads to a gutted community and a victorious yet besmirched justice system.

Arthur Miller’s play was written as a denunciation of the McCarthyite violations of civil liberties in 1950s America. The characters of The Crucible are similarly hectored by religious and legal authorities who arbitrarily interpret Scripture and jurisprudence as it suits their path of vengeance. Rubinstein’s production refuses the fashion of any single historical era by dressing its cast in simple costumes suggesting funerals and fairy tale roles. Old men walk with canes and the witchy girls contort in black skirts. The universal, timeless significance of this story is compounded by the blank, dark backdrop of the action, in which bare branches and the hovering faces of nosey townspeople float hauntingly. Set designer Chris Penna has effectively transplanted the colonial 1690s town into the archetypal forest where the tragedy of The Crucible is forever repeated.

This production displays a community that may be destroyed but a system that persists. Salem is very effectively presented as a community of engaged, outspoken citizens, as each new character shifts the centre of power. However, it seems that the collective and invisible fears of the townspeople hold the ultimate authority. The music seems to incarnate these invisible terrors, building to crescendos before punctuating the more shocking moments with a sound like a stopped heartbeat. These usually coincide with an outburst by one of the female characters, pushed past her limits by the coercive rage of those with authority. The performance of Nina Rose Taylor as Mary Warren is particularly notable as she suffers a magnificent breakdown due to the incessant manipulation, both physical and psychological, visited on her by others. Mary grasps for some authority of her own by incriminating others, but her accusatory screams suggest that structural injustice relies on punishing and compromising everyone involved.

It is therefore lovelier when John and Elizabeth Proctor reunite in the play’s final minutes. Rubinstein’s careful direction has kept the actors physically separate for most of their time on stage, replicating the rift caused by John’s previous infidelity. The couple’s embrace in their few moments together suggests that, after all the institutional havoc of the witch trials, the only salvation possible in this context is personal. The healing of a single relationship like John and Elizabeth’s marriage establishes the possibility of locating goodness in such a sad context. Berrie and Taylor sell their characters’ complementary strengths in their argument over the relative importance of truth and justice, an argument that can only contain tentative glimpses of hope.

The Crucible is a look at archetypal failures of communication and justice that will remain with you. Following the performance on January 20, many audience members remained for a post-show talk-back with the cast and crew, engaging in perceptive questions regarding the play’s continuing applicability. One older audience member recalled her own experience of the McCarthy era; another viewer began a discussion of the presence and failures of feminist practice among the cast. Such enduring art is a good starting point for our discussions of uncomfortable topics, provided we take care to proceed calmly and remain mindful of the systems in which we enact change.