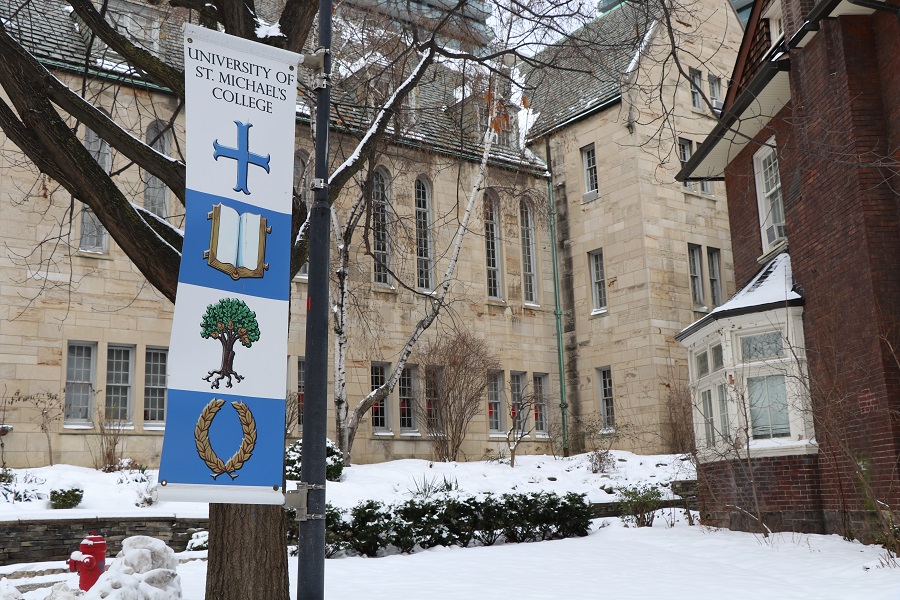 Strike or lockout on the horizon following lack of ‘meaningful progress,’ no-board request

Following eight months of negotiations, the 24 unionized faculty and librarians at the University of St. Michael’s College (USMC) and the USMC administration will look to reach a new collective agreement on Friday, February 9, prior to the Sunday, February 11, no-board deadline.

On Friday, December 8, 2017, USMC faculty and professional librarians voted 86.4% in favour of authorizing a strike, if necessary. On Thursday, January 25, the union requested that the Ontario Minister of Labour issue a “no-board” report, which results in a 17-day timer for an agreement. This deadline is 12:01 a.m. on Sunday, February 11. Following this Friday’s meeting, should the two sides fail to reach an agreement, either may legally take job action — be it with a strike or a lockout. Should this occur, USMC faculty and professional librarians will begin to picket on Monday, February 12.

Their previous collective agreement expired June 30, 2017. Since then, the two sides have met six times. They began to bargain on August 8 and 9, and on August 9, the USMC administration filed for conciliation (a motion that brings a third-party individual into negotiations to act as intermediary). Following this, the two sides have bargained in September, October, December, and most recently, on January 19.

“We’re committed to working very hard in order to avert a strike,” UTFA-USMC Chief Negotiator and Assistant Professor in the Christianity & Culture program, Michael O’Connor told The Mike. “If the employer [USMC] comes to the table serious about bargaining, we’re ready to bargain.” According to O’Connor, USMC faculty and professional librarians tabled their entire package in August.

Should a strike occur, undergraduate students in courses in the following USMC-sponsored programs would be directly affected: Book & Media Studies, Medieval Studies, Christianity & Culture, and Celtic Studies. Graduate students in the Faculty of Theology and the Toronto School of Theology would also be directly affected, as would certain services provided by the John M. Kelly Library.

USMC President David Mulroney released the following statement to The Mike: “We’ve been negotiating in good faith for many months to reach an agreement with our colleagues who are members of UTFA. We’ve tabled a comprehensive offer that tracks closely with the agreement that UTFA reached with the University of Toronto some months ago, that respects our autonomy as an institution, and that contributes to the long-term viability of our university and the community it sustains. Please be assured that we will continue to work cooperatively and respectfully to secure an agreement.”

President Mulroney’s Office declined an interview with The Mikeon the topic, stating, “Due to the nature of the negotiating process, it wouldn’t be appropriate… at this time.”

The Chair of the USMC Collegium, Father Don McLeod, CSB, declined comment on the negotiation process to The Mike any further than to say the following on behalf of his colleagues at the Collegium: “We respect the integrity of the bargaining process and trust that a settlement that is in accordance with the principles of Catholic Social Teaching will be reached in good time.”

“We only [bargained] half a dozen times between August and the end of January,” O’Connor said. “We offered dozens of extra dates but the administration was very reluctant to meet too often. It’s been a very frustrating process,” he added. “[USMC] hasn’t sat with us at the same table since August 9. We triggered the no-board in order to try to finish it because we were making so little meaningful progress.” According to O’Connor, the pace of these negotiations has been particularly slow compared to previous rounds.

USMC faculty and professional librarians first certified (unionized) in 2011. Back then, “the main challenge was a lack of clarity and transparency around terms and conditions of employment… and equity as well as consistency,” current bargaining team member and Associate Professor in the Faculty of Theology at USMC, Michael Attridge told The Mike. “Certifying produced a Collective Agreement that lays out very clearly now for both parties, [USMC] and [UTFA], what the terms of our employment are.”

“I think I can speak for faculty and librarians when I say that we’ve been more productive because of it,” Attridge said. “The [recent] Social Sciences and Humanities Research Council (SSHRC) grant is a great example of that. Once you begin to understand more clearly your workload expectations, you can also then begin to plan for research projects that you can be working on, publications that you can be working on.”

For USMC faculty and professional librarians, there are four remaining issues: they concern hiring equity and diversity, compensation, job security and terms of employment, and terms of agreement.

First, in terms of equity and diversity, they want, according to Attridge, “the same language that’s at the bottom of the academic job postings at [U of T] to be used at [USMC].” This language “speaks about equity and diversity in detail, about [USMC] recognizing the importance of first nations, indigenous, racial diversity, gender, and LGBTQ diversity, these sorts of things.” They also want there to be training in order to facilitate equitable hiring practices.

Second, they are asking for salary and compensation increases identical to those given to other faculty and librarians at U of T. Last year, UTFA negotiated a 1% salary increase and $1,150, lump sum, for each of their members. Instead, the USMC administration has offered “almost half of U of T’s increase,” according to Attridge.

Third, they want greater job security for current and future faculty and professional librarians, along with identical benefits for part-time and/or limited-term contract faculty and librarians already employed by USMC as those received by their UTFA colleagues at U of T. USMC has proposed a new hiring category of limited-term contract faculty. However, USMC faculty and professional librarians believe this to be “precarious employment,” and that it does not sufficiently motivate participation in student and college life.

Fourth, they want a longer-term deal. “It’s strange to us that [USMC] wants a one-year deal without any sort of explanation,” Attridge said. “A one-year deal would put us back in bargaining in April. We’d like multi-year stability. We want to get back to focusing, I would say, exclusively on our teaching, our research, our professional practice or service, what it is that we do primarily, and for the students. One-year deals are almost unheard of in the university sector,” he added.

According to O’Connor and Attridge, the USMC administration has rejected all of these proposals.