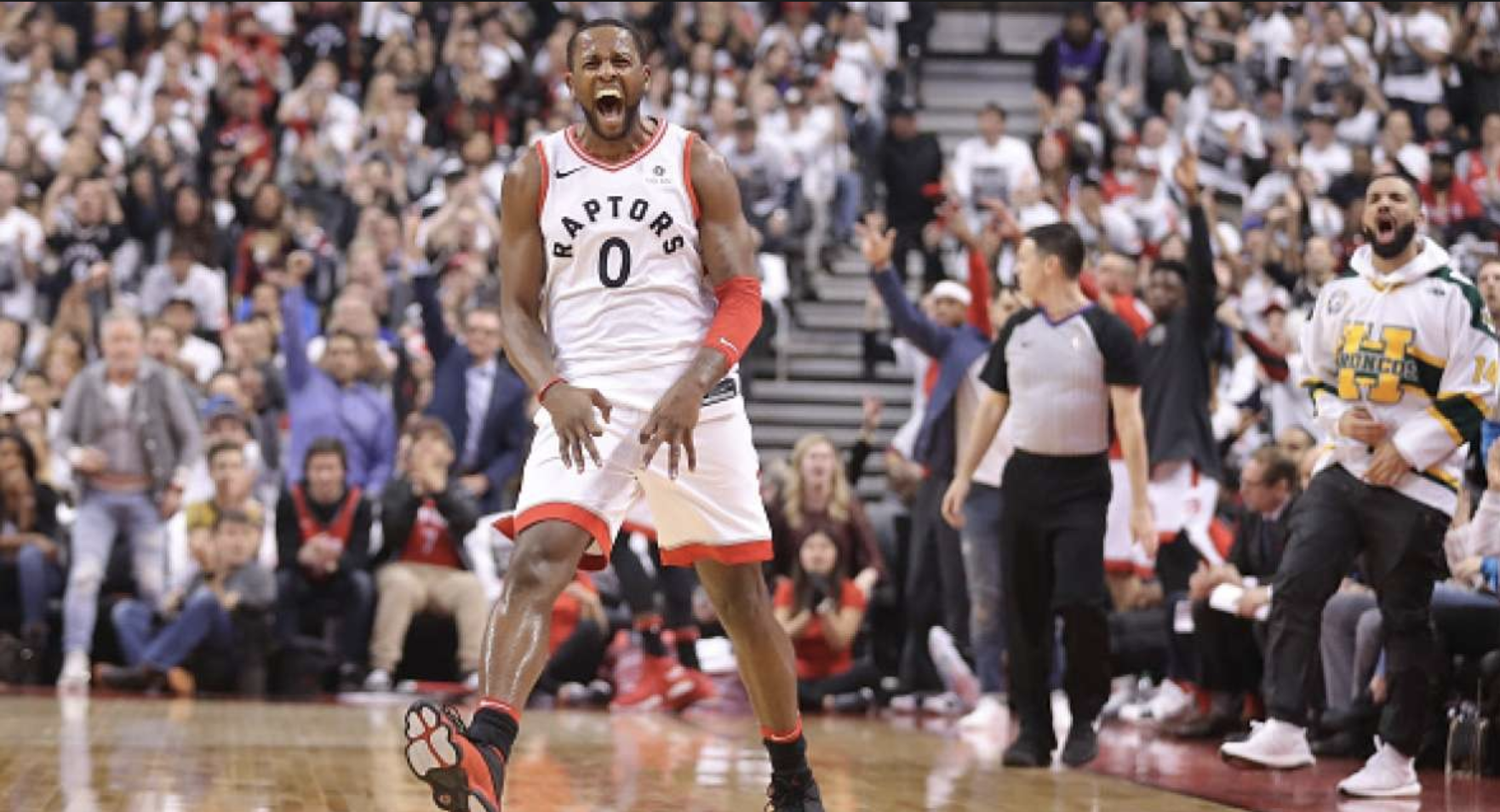 Think it’s hard enough representing one city? Try putting an entire country on your back. “We the North” has become one of many rallying cries for Raptors fans across Canada, one of pride and defiance toward the other 29 American teams that make up the National Basketball Association (NBA), and to the major American broadcasters that seem to think that the Raps are still an irrelevant expansion squad unworthy of more mainstream exposure. This year, Canada’s team is finally forcing America to pay attention, as the Dinos clinched top spot in the Eastern Conference, set a new team record for wins in a regular season, and look like legitimate title contenders. How did the team with the biggest chip on its shoulder go from perennial basement dwellers and league laughing stock to clinching a fifth consecutive playoff spot? The continuity and growth of All-Star backcourt Kyle Lowry and DeMar DeRozan is a big reason. President Masai Ujiri has done nothing but positive things for the Raps ever since coming back for a second stint in 2013. But this year’s team sets itself apart from previous iterations with its burgeoning youth movement and a complete philosophical change in offensive strategy.

Before 2013, the Raptors were the epitome of irrelevance, having missed the playoffs and finishing with a losing record five years in a row, boasting only four winning records in 18 years of existence as a franchise, and had yet to win their first best-of-seven playoff series ever. In the early going, 2013–14 was shaping up to be more of the same, with core player Rudy Gay being shipped off in December and disgruntled point guard Kyle Lowry looking to be the next player offed from a perpetually rebuilding squad. Instead, a deal for Lowry fell through, and the Raptors went 10–2 immediately after the Gay trade on the way to a then-franchise record 48–34 regular season performance and an Atlantic Division title. They fought tooth and nail with the Brooklyn Nets in a seven-game classic but couldn’t make it out of the first round. While heartbreaking, this season was a monumentally pleasant surprise for Raptors fans, and the team had the look of a contender whose best moments were yet to come. The following season saw them take home a second straight Atlantic Division title and one-up their franchise record for wins with 49, but they bowed out in the first round yet again, this time an embarrassing four-game sweep to the Washington Wizards. Despite two seasons of regular season excellence, professional sports is a what-have-you-done-for-me-lately business, and fans and pundits alike called for heads to come off after yet another first round exit. With the addition of a few key free agent signings, the Raptors once again eclipsed their franchise record for wins with 56 on the way to a third consecutive Atlantic Division title. The real test, however, would come in the playoffs, where the Raptors were determined to shake off the dreaded choker label attached to them after their previous unsuccessful forays into playoff basketball.

The Raptors finally reversed the narrative of playoff underperformers, beating the Indiana Pacers in a thrilling seven games for their first ever best-of-seven win, and going on to defeat the Miami Heat in another seven-game rollercoaster of emotions. Unfortunately, their magic ran out in the Conference Finals, where they fell to LeBron James and the eventual league champion Cleveland Cavaliers in six hard-fought games. Despite not going all the way, the long playoff run was a huge step in the right direction, and Raptors fans from Penticton, British Columbia, all the way to Pickering, Ontario, had reason to hope for a championship in the not-too-distant future. The following season saw the Raptors’ streak of one-upping their franchise wins record come to an end — with a high bar set, they still managed 51 wins. They emerged victorious once again from the first round, beating the Milwaukee Bucks in six games, only to run into Eastern Conference team killer LeBron James once again and bowing out in a four game sweep.

Despite shedding their reputation as a good team that falls apart come postseason, the second straight defeat at the hands of the Cavs had many looking at the Raptors’ window of championship opportunity as being slammed shut by LeBron. The general sentiment regarding the team was that they hit their peak, and it just so happened to cross paths with one of the greatest to ever play the game. Lowry, the heart and soul of the team, was a free agent, and there was no guarantee he would re-sign — he wanted above all to win a championship, and it was unclear whether Toronto could reach that level.

Fast forward to this year: both Lowry and prized trade deadline acquisition Serge Ibaka re-upped with the Raptors, DeMar DeRozan is playing the best basketball of his career, rookie OG Anunoby is playing like a grizzled veteran, and summer trade pickup C.J. Miles has averaged one of the highest points per touch in the entire league this year. Toronto looks like its ceiling is higher than another eary playoff exit courtesy of Lebron. Arguably the deepest team in the NBA draws strength not just from its big names, but from a supporting cast developed in the experiment lab of their G League affiliate.

Raptors 905 has proven instrumental in developing many of the big club’s current contributors. Fred VanVleet, Jakob Poeltl, Delon Wright, Pascal Siakam, Norm Powell, and Bebe Nogueira all spent significant amounts of time honing their craft in the NBA G League, and all have gone on to contribute to the “Bench Mob” — the best bench unit in the NBA this season. Contrast this with the Raptors’ old affiliate, the Fort Wayne Mad Ants, which they had to share with 11 other NBA teams, thus greatly mitigating the crucial development of their prospects. In just its second year of existence, the Raptors’ farm affiliate had the second-best record in then-D-League history and took home the D-League championship. This year, despite the crop of key contributors that have graduated full-time to the Raptors, the 905 booked a second straight berth in the G League finals. The focus and investment on player development has and will continue to pay huge dividends for the Raptors, and is a major reason why they are currently fielding the greatest team in franchise history.

Dwane Casey has always been known as an elite defensive coach. When it comes to offence, however, he was seen as holding the team back, with the team’s bread and butter — isolation plays for Lowry and DeRozan — proving to be a recipe for failure and early exits come playoff time. After hitting yet another postseason wall, calls for a replacement grew louder and louder. Instead, Casey stayed put and continued his tradition of helming yet another franchise record season, this time with a reimagined offence that figures to carry the Raptors farther than they’ve ever been yet in the playoffs. Most of the heavy lifting on offence, though, has to be attributed to assistant coach Nick Nurse, who has been with the Raptors since 2013 and was charged with changing an offence in the bottom third percentile in pace, 3-pointers attempted, and assists into a modern juggernaut emphasizing passing and 3-point shooting. He oversaw the implementation of the new offensive philosophy in Toronto to perfection, even transforming starting center Jonas Valanciunas from a lumbering ode to traditional big man of the past into an efficient if still limited 3-point shooter with much-improved footwork that has proven to be a boon on both offence and defence.

The Raptors have enjoyed a sustained run of regular season success for half a decade, but this year finally feels like they’ll translate that success over into the playoffs. DeRozan and Lowry are well-rested and ready to give the performances of their lives. The Bench Mob, more lethal than many starting squads around the league, are making sure that all of the money and time invested into player development is paying massive dividends, both now and for the future. Dwane Casey’s insistence on a strong defensive team has synthesized with Nick Nurse’s modern offence, making the Raps a top-five juggernaut on both offence and defence, well-equipped to make some serious noise this spring.