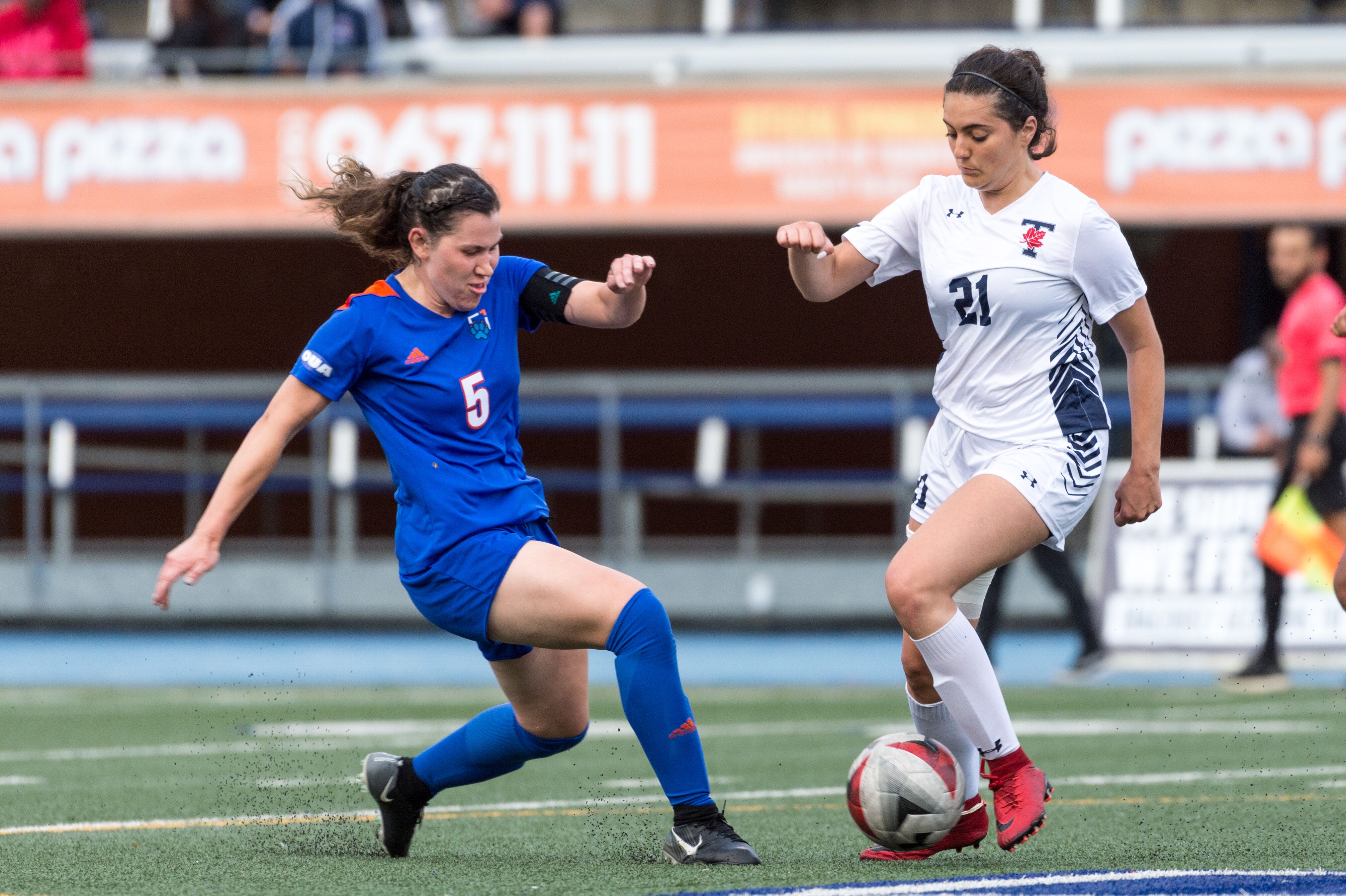 The Varsity Blues women’s soccer team has never finished above the Ontario Tech Ridgebacks in the Ontario University Athletics (OUA) East standings. But given their early season form and their solid 3–1 victory against the Ridgebacks on Friday the 13th, the tides may soon change.

First Blues career goals for Valentina Greco and Erin Kelly, as well as a customary Jenny Wolever strike in the last minute, secured the three points for the hosts. Following the game, the Blues had earned eight points from five matches — a decent return considering they have also played against the Queen’s Gaels and the UOttawa Gee-Gees, two of the OUA East’s top teams.

The Blues continued to tweak their offensive line from previous games, this time starting with Kelly as the centre striker and Wolever and Miranda Badovinac on the left and right wing respectively. Daniella Cipriano, building on her impressive performance against the Gee-Gees the week prior, displayed good forward pressing in the game’s early minutes. She won the ball in the attacking third and combined well with the forward line. The ball eventually worked its way to Greco, who found the back of the net with a good strike in the second minute.

The Blues continued to torment the Ridgebacks’ defence, exposing their open flanks and adopting a dynamic press. Badovinac in particular impressed in the game’s early proceedings, regularly slipping past defenders and distributing the ball well. She combined with Kelly to press the Ridgebacks to great effect. In the 14th minute, Wolever made a good run down the left flank and squared the ball to Badovinac, who in turn provided it to Kelly. The third-year striker lashed a shot toward goal which was cleared off the line. Eager to get on the score sheet, she continued to apply pressure and eventually managed to head the ball in.

Two goals up inside the opening 15 minutes, the Blues eased off the throttle slightly, but still continued to press their opposition effectively. Maddie MacKay, donning the captain’s armband, controlled the midfield well by breaking up play and blocking attacks.

The first notable Ridgebacks attack came in the 25th minute. The team broke the Blues’ offside trap, only for goalkeeper Vanna Staggolis to save well. As the half wore on, the Blues’ attacking cohesion faded slightly and the Ridgebacks began to force their way back into the game.

They would eventually get their goal in the 44th minute from a Sarah Foster penalty, after Staggolis was adjudged to have fouled the opposition inside her box — much to her disagreement. Still, the Blues entered half-time having mostly dominated proceedings.

The second half was much quieter for the Blues. The team introduced Kristin Parkes for Wolever, changing the dynamic of their attack. Parkes, Badovinac, and substitute Krizia Tarantino became the team’s focal point in attack, but they were unable to find the net.

As the half wore on and the players began to tire from their intense press, the Ridgebacks eased into the game. They slipped through the Blues defence, forcing a number of saves from Staggolis.

Wolever was reintroduced in the latter stages of the second half and scored the team’s third goal to secure the three points and ease the growing tension among the team. The Blues broke on the counter in the 89th minute and Kelly launched a stinging shot toward goal from just outside the box. The Ridgebacks’ goalkeeper spilled the shot onto an onrushing Wolever, who displayed great anticipation and pace to reach the ball first for a tap-in.

Associate Head Coach Angelo Cavalluzzo stated to The Mike that the Blues were “very, very good” in the opening 20 minutes, but were less impressive following the second goal.

“We scored that second goal and I think we kind of got a little bit too confident, a little bit too relaxed, and let [the Ridgebacks] back into the game,” stated Cavalluzzo. “I’m not very happy with the performance tonight. I think we’ve seen a lot better from ourselves. We should have put them away early. It should never have been a game tonight.”