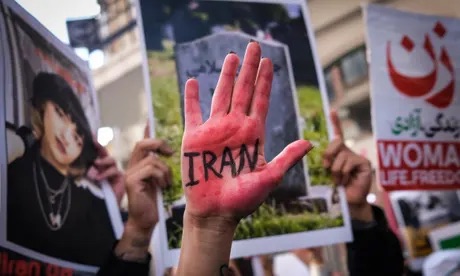 Mahsa Amini was just 22-years old when she passed away in the Tehran Hospital, succumbing to injuries that were believed to have been sustained under police custody – a claim that the police have denied. The Iranian woman was arrested by the Islamic Republic of Iran’s morality police for allegedly breaching the country’s Islamic morality laws that call for a strict female dress code. Just a day after her death, hundreds of mourners assembled at Amini’s funeral in her hometown of Saqqez, tearing down a poster of Iran’s supreme leader Ayatollah Ali Khamenei in dissent to the surmised unjust treatment leading to her death. The aftermath of the initial protest created a ripple effect that saw more protests rising throughout the population. The government chose to shut down the internet in parts of the nation to prevent the protests from spreading in vain since, by then, news regarding Amini had already been circulated.

Nearly one month since the death of Amini on September 17th, the civil unrest has not dimmed down in the slightest. In fact, protests have only intensified, further fueled by the death of 16-year-old student and protestor Nika Shahkarami, who was found deceased and buried 10 days after going missing. The news of this other crime gave protestors a new impetus and magnified strife amongst them. Both the deaths of Amini and Shahkarami have galvanized protestors, providing inspiration and courage to rebel against the gratuitous leadership. The insurgence has been led not only by demonstrators, but Iranian celebrities, athletes, and politicians as well. An outcry for the disbandment of the morality police emerged, believing that the death of Amini should be the turning point. Yet the discourse within the capital has remained undeterred, with Iranian Interior Minister Ahmad Vahidi stating that “the [morality] police don’t have any tools to beat anyway,” suggesting that the root cause of the protest was only mere speculation.

Despite the inert response from the Iranian government and their brutal retaliation to protestors, demonstrations have subsisted, spreading beyond the borders of Iran, and propagating throughout the world, reaching even the University of Toronto community. On September 22nd, several hundred U of T community members gathered in front of Convocation Hall to protest the death of Mahsa Amini. The vigil held in the St. George campus demanded for action to be taken by the Canadian government, pushing for the government to break down diplomatic ties with the Islamic Republic of Iran, as well as requesting Canadian news outlets to provide a platform for Iranian women to speak out about their own experiences. Another demonstration was held at the Sidney Smith Hall on October 6th, rallying all the way to Queen’s Park.

The Canadian government has since enacted sanctions on Iran, with the initial sanctions imposed on October 3rd, and further sanctions in place since October 13th. These sanctions were placed in response to the “Iranian regime’s systematic human rights violations and ongoing actions that destabilize regional security.” The downing of Flight PS752 in January of 2020 by Iran’s Islamic Revolutionary Guards Corps – which killed 176 people including eight U of T community members – also evidently prompted the action.

Amini’s death was not the first of its kind, as another woman was allegedly killed by the morality police due to inappropriate head coverage in 2007. Similarly, the 2022 protests were preceded by the Girls of Revolution Street movement of 2017 which also strived to soften regulations on the hijab. However, it failed to do so, with some members even receiving jail time. But unlike the incidents of 2007 and 2017, Amini’s death seems to have finally broken the last straw. Opposition politician Medhi Karroubi blamed supreme leader Khamenei for Mahsa Amini’s death, calling for an end to the “humiliation and harassment of women and girls.” U.S. special envoy for Iran, Robert Malley, echoed the words of Karroubi and the Canadian government, stating that “Iran must end its violence against women for exercising their fundamental rights.”