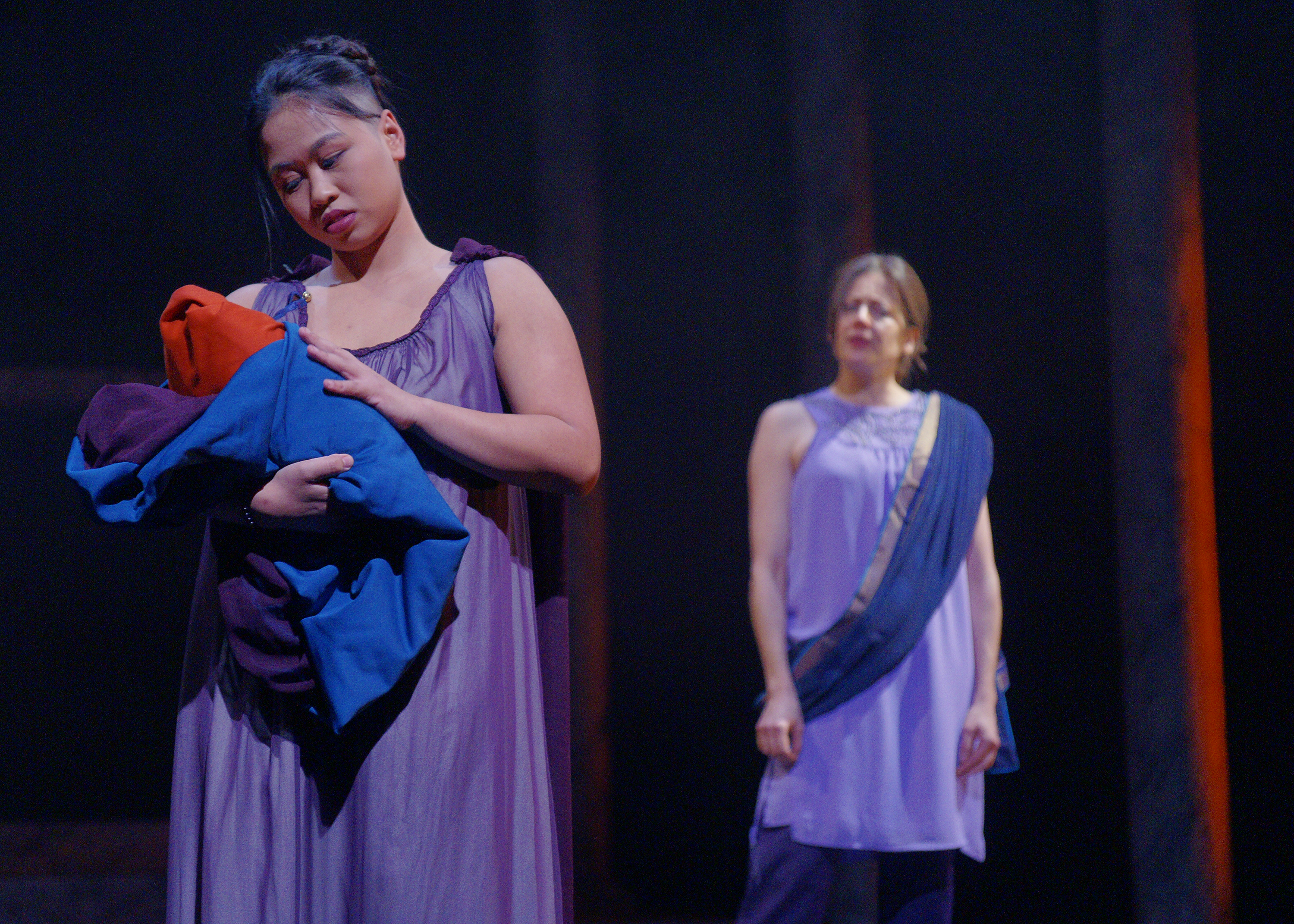 Hart House’s Portia’s Julius Caesar does not so much retell the classic Shakespearean story from Portia’s perspective as it illuminates Portia’s narrative thread within the original play, allowing the viewer to realize that perhaps her voice was the most interesting part all along. In Hart House’s rendition of Shakespeare’s tale, the dominant themes of politics, war, and betrayal are backgrounded, foregrounding more feminine themes of domestic strife, labour, and motherhood instead. Director Eva Barrie constructs Rome’s landscape with women — washing clothes, sharing gossip, caregiving — and creates the play’s soundscape from a chorus of female voices. In fact, Portia’s Julius Caesar is ultimately an examination of the damage done when we silence marginalized voices, and particularly the voices of women.

Portia, often reduced to her role as Brutus’ wife, is the protagonist here, and her hero’s journey is one of fraught motherhood. Portia’s Julius Caesar opens with a conversation between servant women discussing Portia’s strange insistence on breastfeeding her own child despite being a noblewoman, and this intersection of Portia’s dual identities — the intellectual noblewoman and the physical mother — reveals an immediate source of tension. Motherhood is imagined as something bestial, animalistic; Brutus calls her “the prettiest goat in all the land,” manifesting Portia’s deep fear of being reduced to a mere producer of milk — a mother.  The animal imagery continues; “Since [my son’s] birth…all do treat me like a wounded bird,” Portia laments, examining the infantilization of new mothers. Portia’s Julius Caesar seeks to unravel the complex relationship between motherhood and identity, critiquing the way “mother” so often becomes an all-encompassing label while also remaining cognizant of the all-encompassing nature of motherhood. The play ultimately rejects the image of mother as animal, however, and focuses on Portia’s complex inner and domestic life. While many renditions of the tragedy cast Brutus in the role of tragic hero, Portia’s Julius Caesar focuses on Portia’s tragedy — the abject death of her infant son. Standout performer athena kaitlin trinh, who is equal parts radiant and harrowing as Portia, then delivers a gorgeous monologue about misery and motherhood.

The play reflects many issues we face today. Though Julius Caesar can be dry at parts, Act 3, Scene 2 is almost magical; Mark Antony’s gorgeous display of rhetoric at Caesar’s funeral is transformative, as though his speech is a spell that he is casting upon the citizens of Rome. Portia’s Julius Caesar does this scene justice, transforming the sober crowd attending Caesar’s funeral into a mutinous mob, intent on killing Brutus. The transformation from eulogy to chaos reveals how easily people’s minds can be swayed; this moment acts as a sharp invocation to viewers, imploring them to remain wary of misinformation and rhetoric, to not fall prey to the whims of media and news. This scene warns us to listen to allvoices, not only the loudest ones.

“Beware of the Ides of March” is a warning not only for Caesar, but also to Brutus, who ignores the female voices wisely warning him against violence. Throughout Act 1, Scene 1, women gossiped while performing domestic tasks, a seemingly stereotyped image, but their conversation unpacked the complex political tension between monarchial and republican thinking. Their words were smart; they understood the gravity of the social unrest in Rome, yet the noblemen they worked for would never think to solicit their opinions. Even the land acknowledgement before the play worked toward this revelation. Yusuf Zine (Caesar) listed the problems plaguing Rome circa 44 BCE, problems that motivate the plot of the tragedy about to unfold: miscommunication, ignorance, the silencing of marginalized voices. “But I’m sure that by 2019 you’ve figured all that out,” he laughed, and then proceeded to acknowledge the Indigenous voices that Canada has silenced, reminding viewers that despite intervening millennia between Caesar’s time and ours, we still haven’t learned the simple lesson of listening and valuing others’ words.

“Our children should inherit peace,” is a cry from Portia’s Julius Caesar that rings true today: we should offer our children a better world than the one we were born into, but for this to happen we must learn to listen: listen to climate scientists and activists, listen to Indigenous women and girls, listen to victims of racial and sexual violence.

Portia’s Julius Caesar begs its audience to simply listen, so that we don’t find ourselves, in another 2000+ years, wondering how we have continued to make the same mistake.