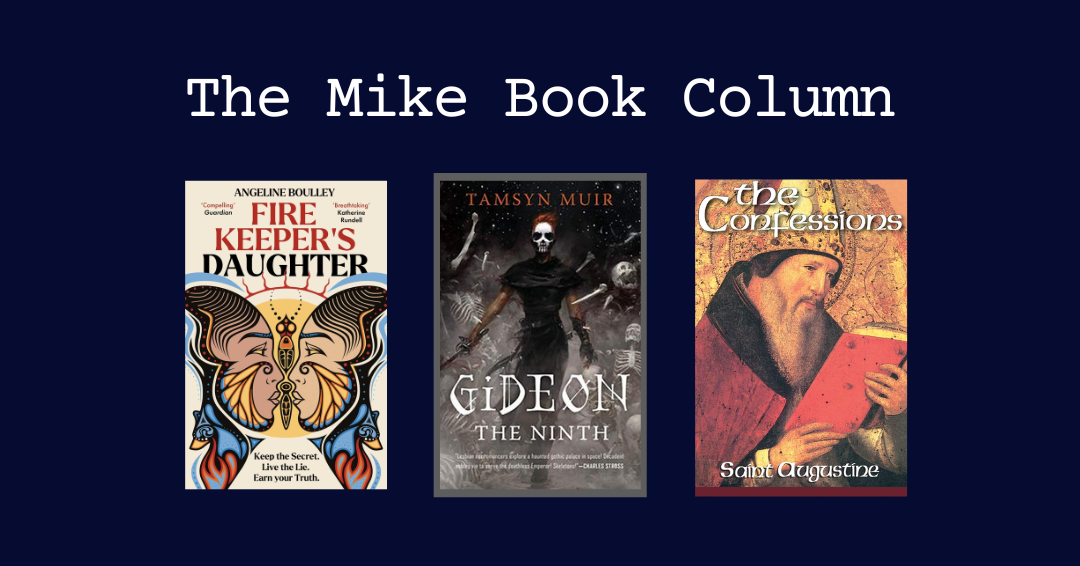 Normally I’m not someone that picks up a YA crime thriller, but Firekeeper’s Daughter is a one-of-a-kind read that transcends its genre. Firekeeper’s Daughter, the debut novel for author Angeline Boulley, follows Daunis: a teenaged Ojibwe as she becomes involved in an FBI investigation in her hometown of Sault Ste. Marie, Michigan and the nearby Sugar Island reservation.

An Anishinaabe woman from Sault Ste. Marie herself, Boulley’s love for her home is her greatest asset. Boulley animates the story’s simple premise with her intricate descriptions of Sault Ste. Marie and Sugar Island. Even as the investigation grows increasingly complicated, Boulley never misses the opportunity to highlight the beautiful natural landscape that her characters inhabit. From the terrifying wonder of Sugar Island’s cliff sides to the frigid shores of Lake Michigan, I felt myself gasping and shivering alongside Daunis.

Alongside the picturesque backdrop, Boulley brings both communities to life with a range of Indigenous and non-Indigenous characters all wrapped up in a web of small town politics. Although her non-Indigenous characters are well-developed, Boulley’s background as an Ojibwe woman allows her to inhabit the minds of her Anishinaabe characters with care and complexity. As with her descriptions of Sault Ste. Marie, Boulley lets the love that she holds for the Ojibwe community shine through in the voice she gives to her Indigenous characters. Each character is given space to stand out and nowhere is that stronger than with the development of Daunis’ character. Rather than lose Daunis’ personality within the increasingly complex plot, Boulley centers Daunis’ experience as an Anishinaabe woman, having her draw upon her Ojibwe identity as a source of strength and knowledge. Through Daunis, Boulley draws attention to the various forms of oppression that Indigenous communities continue to face while equally engaging with Anishinaabe culture in a way that feels truly personal.

However, Firekeeper’s Daughter still falls prey to the common pitfalls of the YA genre as Boulley relies on several obvious tropes within the novel’s romantic subplot. Nevertheless, Boulley has managed to create something beyond a simple YA thriller. Firekeeper’s Daughter is a love letter to Sault Ste. Marie and the Anishinaabe of Sugar Island that marks a crucial milestone in representing Indigenous people as complex individuals navigating a neocolonial world rather than one-dimensional figures relegated to the background.

Gideon the Ninth – by Tamsyn Muir

Have you ever wondered what would happen if someone took an Edgar Allan Poe poem, mixed it with The Hunger Games, and made all the characters gay? No? Well, Tamsyn Muir did. Her vision culminates in a breathtaking epic that has all the makings of a speculative classic. Peppered with equal parts biblical allusions and meme references, Gideon the Ninth is a subversive murder mystery that constantly evades categorization. Coincidentally; it’s also the perfect Halloween read. The author’s use of gothic tropes and motifs results in a creepy, atmospheric setting. The cast is populated by necromancers and reanimated skeletons. Even readers who are unfamiliar with speculative fiction would appreciate this book for its humour, addictive pacing, and complex characters.

Muir’s characters are so well-developed and real that the pages can hardly contain them. The titular protagonist is unlike any female character I’ve ever encountered: she is brash, snarky, and unapologetically gender-nonconforming. In a galaxy ruled by necromancers, Gideon Nav lives in indentured servitude to her vicious rival: a scrawny, uptight bone magician named Harrow. When Harrow and seven other necromantic heirs are selected to partake in a contest of wit at an ancient, haunted castle, Gideon is roped into tagging along as Harrow’s bodyguard, or ‘cavalier’. The prize? Immortality. The plot’s unique nature is bolstered by the author’s artful use of juxtaposition. Gideon The Ninth incorporates horror, fantasy, and sci-fi conventions. The seemingly antiquated social roles of ‘necromancer’ and ‘cavalier’ are reminiscent of medieval lord/knight dynamics, yet the dialogue is modern. Sword-fighting is the preferred method of combat, despite the fact that the plot unfolds in a futuristic world with advanced space technology. The novel’s primary setting is an inversion of the magical school trope. Canaan House is no Hogwarts: though a generation of young necromancers are summoned to a castle and encouraged to study the secret of eternal life, they receive no structured education at all. They are left to wander through a maze of abandoned rooms, at the mercy of whatever is lurking in the shadows.

St. Augustine’s Confessions is a remarkable book where it is set in such a distant time, yet it feels so present and current. It’s as though this book has some quality allowing it to maintain that presentness eternally. When reading it, it’s as though Augustine is there alongside you.

In his Confessions, St. Augustine goes through his entire life with a fine-toothed comb. He was not always a saint, quite the opposite actually; and so Augustine recounts his various past follies. Augustine also reflects on times in his life when God seemed to intervene. For instance, Augustine recounts a time when his irreligious friend had fallen ill with something and then wished to be baptized. His friend died shortly after. Quite the miracle.

Confessions stirred a new interest in me. Theology. While Augustine goes through his life, he’ll frequently cite Bible verses, and it resulted in me wanting to study the Bible, despite not being Christian. Towards the end of the book, after he’s finished telling his life story, Augustine delves much into philosophy.

One topic he goes into is time. What is the past, present, and future? What exactly is the present? Is it a second? No, because we could obviously get more instantaneous than that. Think of a millisecond. So is that the present? No that wouldn’t be it either. Then what?

Reading Confessions was a truly unique experience, and I recommend it to any lover of books. Its language is exquisite and it’s just a very interesting life story. Aside from that, it offers such inquisitive philosophy and theology, presented with a palpable personal touch. I’m still amazed that this book was written so long ago, considering just how relatable and relevant the book felt.

This is hands down my favourite book that I’ve read.