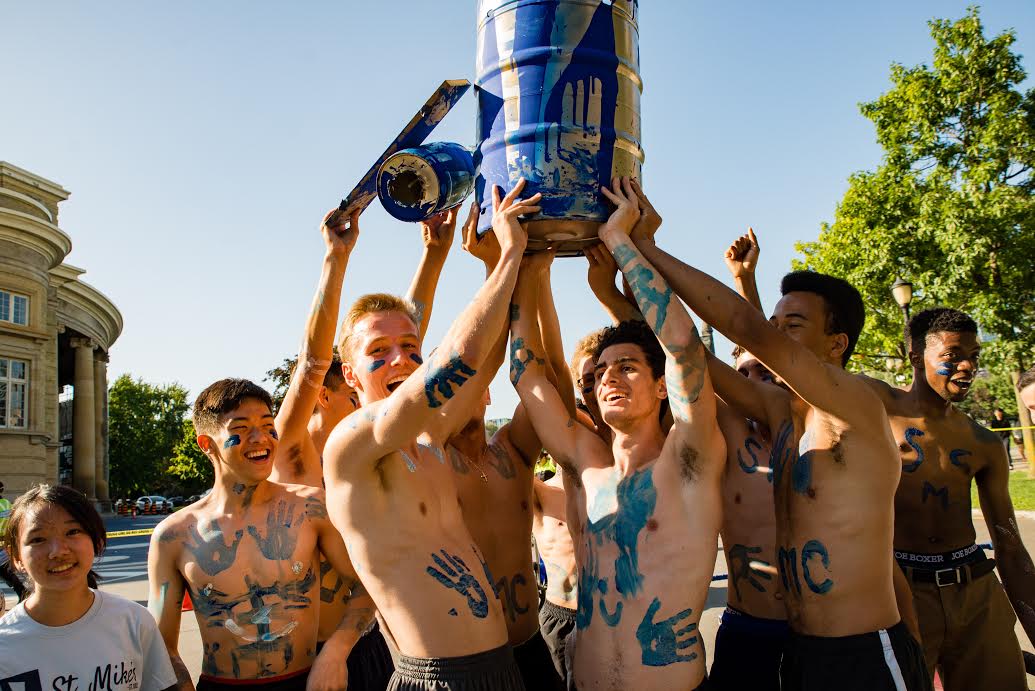 Orientation Week is crucial because it introduces first-year students to the USMC community. It is meant to make them comfortable on campus whether they’re commuting or living in residence. Orientation also acts as a social aid, helping students meet each other and make friendships they would not have otherwise made. It shows our new students how much pride USMC has, and instills that same pride within them. Further, Orientation Week brings together the USMC community by having upper-year students work together to make the week as great and memorable as possible for the incoming students.

The average Orientation Week day was extremely busy. Everyone started with breakfast in the Canada Room. After breakfast, the Executive Officers would host a Marshal meeting, followed by a leader training. There was always a morning activity, like the week’s Opening Ceremonies, Scavenger Hunt, Academic Orientation, Carnival, or Pep Rally. These morning activities were always followed by lunch, then more afternoon activities. The afternoon was filled with Games Rotation, Mass/Meditation, the B.K. Chan talk, Choose Your Own Adventure, the University of Toronto Student Union (UTSU) Tri-Campus Parade, and Invocation. These events were followed by dinner to close off the day. On the first three days, there were events like a Beach Party, Games Night with Pair-A-Dice and Trek4Teens, and a Formal at the Royal Ontario Museum (ROM). The last night held the closing ceremonies and the St. Michael’s College Student Union’s (SMCSU) Kelly’s Corner.

The major events of the week included Invocation, the Beach Party, the B.K. Chan talk, the Formal at the ROM, the UTSU Tri-Campus Parade, and the closing ceremonies with SMCSU’s Kelly’s Corner.

There were many Orientation Week sponsors. The biggest influencers were SMCSU, Aroma Espresso Bar, Freshii, Kernels, and Zaza Espresso Bar.

For invocation, the first-year students and Orientation staff marched their way to Convocation Hall. There, they heard U of T President David Sylvester welcome them to the USMC community and each first-year received pins with the new USMC crest.

The Beach Party was held in Sam Sorbara Hall. It was DJ’ed by USMC legend Anthony Khoury. There were plenty of snacks and candy to go around. It was a great way to end off the first day of Orientation Week.

The B.K. Chan talk was given by Karen B.K. Chan, an educator, speaker, and author, whose speech touched on consent in everyday life.

The most anticipated event of Orientation Week, the Formal, was held at the ROM on Tuesday night. Anthony Khoury DJ’d again, while Orientation staff and students danced the night away.

The UTSU Tri-Campus Parade, held every year, started with our USMC Pep Rally where students could paint themselves in blue and white. The students chanted the “Hoikety Choik,” “Bubaloo,” “Everywhere We Go,” “Oh When St. Mike’s,” and “Deep in the Heart.” Students and leaders walked together to the Varsity Arena, where they competed in a cheer-off with other colleges and faculties. They followed the parade route, cheered, and ate pizza all the way back to King’s College Circle.

At closing ceremonies, it was revealed that the Orientation group S1 won the O-Cup and received certificates for having the most amount of points accumulated during the week. They were later awarded T-shirts. SMCSU’s Kelly’s Corner featured performances by members of the SMCSU council, upper-years, and first-year students. SMCSU also sponsored a BeaverTails truck for the evening.

One of the most famous and traditional events, the Bed Races, took place on Thursday, September 5. While not officially during Orientation Week, the Orientation team (Orientation Coordinator Anna Zappone; the Executive Officers Adam Gomes, Jessica Sorbara, and Taylor Medeiros; and the Student Life Associate Emma Graham) still took it just as seriously as any other event. They held try-outs and practices to make sure the students were ready to compete. USMC had two teams compete — an Orientation Staff team and a first-year team. The first-year team outshone Engineering and Daniels Faculty of Architecture. USMC ended Orientation Week by, of course, winning the annual Bed Races and bringing home the trophy.