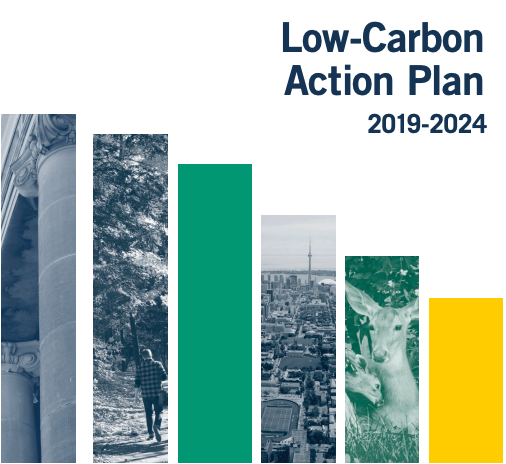 The University of Toronto (U of T) has announced its new Low-Carbon Action Plan. This plan will seek to cut greenhouse gas emissions by 37% by 2030. U of T hopes that this plan will put it on the path to becoming a “net-zero” campus.

Using the recorded emissions data from 1990 as a baseline, the plan will track emissions from 2018 to 2024 to ensure that the Low-Carbon Plan is effective and will reach its 2030 goal of reducing emissions by the stated 37%.  In 2018, the university emitted 114,265 tonnes of greenhouse gas emissions. The goal will be to reduce this number to 85,223 tonnes in 2024 and 73,684 in 2030. If successful, the plan will see a total reduction of 44,567 tonnes of greenhouse gas emissions per year, according to the Action Plan.

How does the university plan on achieving this?

Some of the projects outlined in the plan include modernizing the heating systems, increasing the usage of solar energy, planting trees and environmental spaces within urban properties, as well as working to reduce energy consumption through continuous evaluations of campus buildings.

U of T has also stated that all new buildings and renovations will be designed to ensure that they meet environmental standards, while seeking to reduce consumption, emissions, and energy.

Many of these efforts were first developed in 2018 and have already come into effect, including the usage of solar energy, smart building controls, higher efficiency boilers, and ground source pumps.

However, U of T faces some unique challenges to the reduction of greenhouse gases. The age and condition of many of U of T’s historical buildings, as well as the extreme weather conditions of the city, make universal environmental changes difficult. These challenges will require U of T to continue reforms on an on-going basis, continuously analyzing the effectiveness of certain projects.

The unveiling of this plan comes in response to U of T’s 2018 decision to join the University Climate Change Coalition, or UC3, a North American coalition dedicated to helping communities move to a low-emissions, green future. As a leading research institution, U of T has agreed to utilize its resources to help propel climate change by working both within the institution, as well as with local businesses, organizations, and foundations.

The plan also allows U of T to work in accordance with the Government of Ontario’s 2015 greenhouse gas reduction agreement. This agreement originally established the preliminary plan of reducing emissions by 37% by 2030.

The hope of this plan is to stretch its influence outside of the campus and into the community. In the introduction to the plan, U of T President Meric Gertler stated that U of T is “developing programming to engage the Toronto area community to galvanize local, regional, and national action on climate change.”