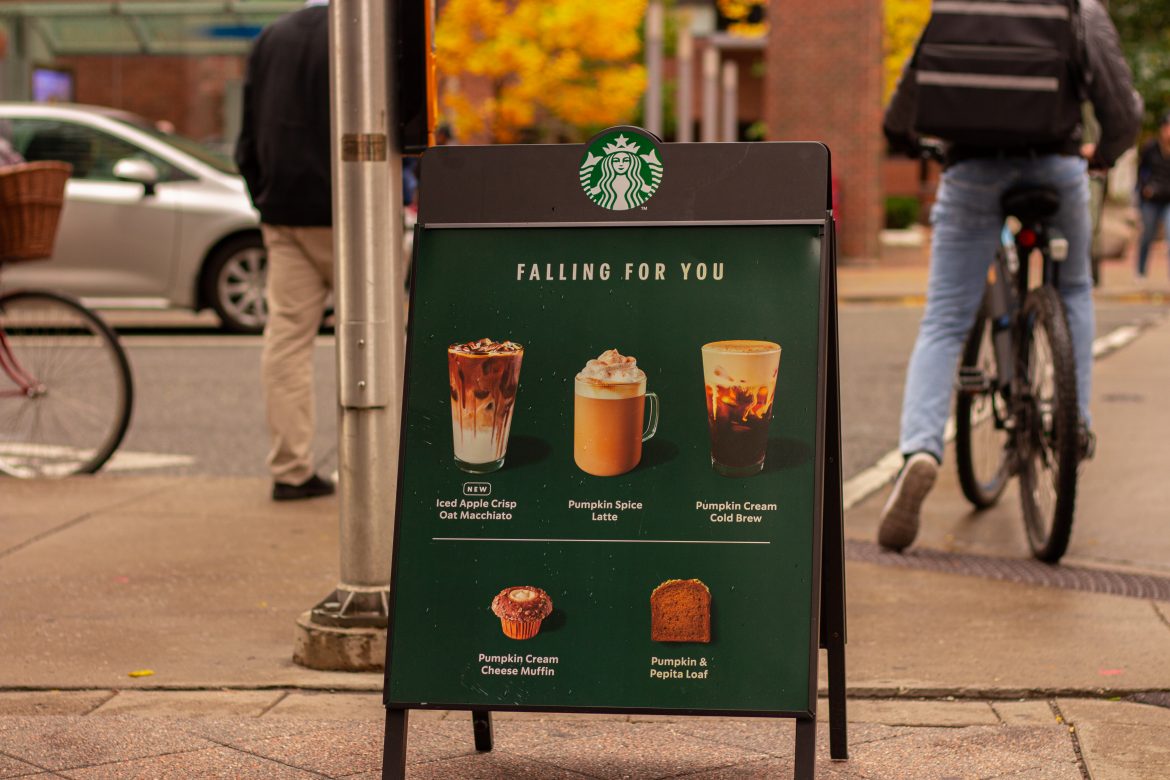 Surprisingly enough, the best one came from a gas station

As autumn leaves begin to fall and the weather starts to cool, pumpkin spice season is once again upon us. To celebrate the time-honoured tradition of pumpkin spice, we decided to try some of the pumpkin spice lattes (PSL) available in Toronto. Here are our thoughts:

Darian: When I think of pumpkin spice, Starbucks is the first to come to mind. As an avid black coffee stan, the sweetness of this latte was a little too much; it tasted a lot like sugary pumpkin flavour and milk, overpowering the taste of coffee. Of all the lattes we tried, this was by far the sweetest and most expensive. However, pumpkin spice season would not be complete without at least one Starbucks PSL.

Arib: This one is a classic. After trying the other lattes I realised that the sweetness is a bit overpowering, however, it doesn’t detract from the overall experience of drinking it. The pumpkin spice flavour is a tad artificial, but sometimes that is exactly what you need after a long day.

Darian: To put it nicely, this drink should not be on the market. There was something very off about the taste that is hard to describe. It did not taste like pumpkin or coffee, and had an overpowering cinnamon topping that detracted from the rest of the drink. Thankfully, this one was not too expensive, however, you could not pay me to drink this again. If you want coffee from McDonald’s, I would suggest just a regular iced coffee, not a PSL.

Arib: The McDonald’s PSL is a drink I would not give to my worst enemy. To be quite blunt, it was almost undrinkable, and I had to force myself to choke it down. Personally, I felt that the drink had a weird fishy, metallic undertone to it, which is absolutely not what you want in a pumpkin spice latte.

Darian: Personally, I enjoy Second Cup coffee and their PSL did not disappoint. It strikes a good balance between the sweetness of the pumpkin flavour and the bitterness of coffee, something Starbucks struggles with. As an American, I am upset that we do not have Second Cup. Although, I will say that the Dunkin’ PSL makes up for it.

Arib: This pumpkin spice latte is almost perfect. It was our top contender in the rankings until the 7-Eleven latte came along and dethroned it. The one qualm I have with the Second Cup latte is that the pumpkin spice powdered topping is not up to par with the rest of the drink. I found it to be annoyingly chalky and bitter. Besides that, this is a stellar drink, and I would definitely recommend it.

Darian: The first sip I took was magical. There is nothing wrong with this PSL; the taste, the price, it’s literally perfect. The day this PSL is no longer available may as well be the worst day of my life. Drinking this reminded me why people love pumpkin spice so much; I can imagine myself drinking this while watching Gilmore Girls on a cool fall day.

Arib: I was genuinely shocked when I took the first sip of the 7-Eleven pumpkin spice latte. Drinking this was a religious experience. As I made my way to the bottom of the cup, I could feel the very essence of autumn entering my body. This latte is easily the best out of all the ones we tried as it has the perfect balance between pumpkin spice flavour, sweetness, and coffee.

Darian: I must confess, I don’t really like tea, so I did not expect to like this and, well, I did not. I was hoping maybe the combination of pumpkin spice and bubble tea would be good, but it was not; it felt like oil and water, two things that just do not go together.

Darian: It may be offensive to other PSLs to call this a PSL. I had to double-check the receipt and make sure we ordered the right thing as it had zero pumpkin flavour. It felt like Tim Hortons (Tims)  just put a regular latte in our cup and just added cinnamon topping to the whipped cream and called it a day. I will probably stick to my black coffee if I ever go back to Tims.

Arib: I know for a fact that Tim Hortons is rolling in his grave right now. Somehow, Tim’s PSL barely has any pumpkin spice flavour to it. It’s bland and almost flavourless. The pumpkin spice topping is basically just pure cinnamon which doesn’t have a great mouthfeel, and the whipped cream dissolved into a weird oily layer that just sat on top of the beverage.

Darian: I cannot believe we waited over an hour for a neon orange, spicy-tasting bagel. It tasted like they added a little too much food colouring to a bagel; I could not really taste the pumpkin, but they definitely added spice. I appreciate a bagel store trying to get into the autumn spirit, but they fell short with this one.

Arib: Never in my life have I been so disappointed. I had been looking forward to trying this bagel for weeks and when I finally got my hands on it, it was such a letdown. First and foremost, the colour of this bagel was incredibly unappetizing. The pumpkin flavour did not come through at all, while the spice was a punch straight to the face. I tried toasting it and spreading cream cheese on it to save it, but my efforts were to no avail.