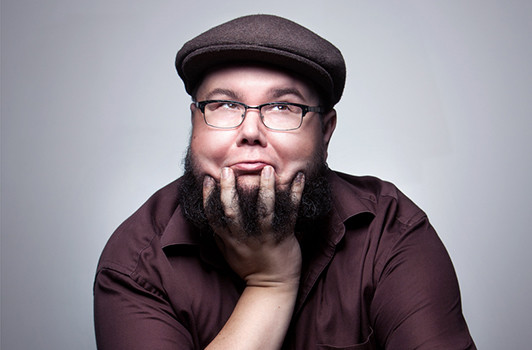 Shane Koyczan’s “For Many” and the problem with standards

Shane Koyczan is a Canadian spoken-word poet and writer. In 2000, Shane became the first Canadian to win the Individual Championship title at the National Poetry Slam. He is well known for writing pieces that deal with issues such as bullying, cancer, death, and eating disorders. His most famous pieces are the animated videos of his spoken word poems “To This Day,” “Shoulders,” and “Troll,” that he released on YouTube. “To This Day” and “Troll” are anti-bullying poems, while “Shoulders” is an environmental piece for the #bluedot movement. This article focuses on “For Many,” a spoken-word poem that talks about beauty, how society views it, and its role in our lives.

The main phrase and reference that “For Many” utilizes is a question taken from Shane’s life that he received many times growing up: “If you could change anything about your body, what would it be?” At the time, he didn’t quite understand the context of the question and responded that he would want tentacles for arms so that he could give inescapable hugs and climb buildings. However, when people clarified what they meant, what they were truly asking was, “Would you want to be thin?” Shane states that growing up, he struggled with his body image and that originally, he never planned to write this poem. He was under the impression that he would only be whining about his own insecurities. He questioned whether he needed to just get over himself. Then, one day, he received a question on Facebook from an eight-year-old boy. This boy sent a picture of himself asking, simply, “Am I ugly?” Throughout his life, Shane says that he has met people who have called him beautiful and meant it, but it has taken him a long time to actually believe it. And that he felt for this kid because he was probably going to go through the same thing. He decided to write this piece because it wasn’t just for him, it was “For Many.”

In the beginning, Shane highlights the discord between himself and others when they ask the question: “If you could change anything about your body, what would it be?” Shane says that he’d turn his nose into a rose in order to steal kisses when people leaned closer to smell it. The answer that people wanted though, was some simple aspect of his body that he could change to look more attractive to others, “as if my body were a rack of scrabble tiles that I could rearrange and exchange for better letters because it seems the world has got us all trying to spell beauty.” The concept of beauty is not so simple, as if the aim in the game of life was to mold and uphold oneself to these singular concepts of beauty standards. We hate the way we look so much that he makes the comparison to steel wool. We’d ‘scrub away our flaws’ until we’re unrecognizable, just so we wouldn’t have to gaze upon them. We place our confidence on how others feel about our appearance, hoping that they don’t think we’re as ugly as we think we are. Shane questions the paradox of this: “How can we be beautiful in a world that delves no deeper than our skin?”

He continues with this line of thought by mentioning how obsessed people are with their desires to be beautiful; many are under the impression that they can just purchase their desires with no consequences, as though fulfilling the wish to change your body is the only path to being happy with yourself. Shane states that society is stuck with the mentality that you can only change your appearance to uphold beauty, and that people act as if attitudes, beliefs, thoughts, and ideas could not be changed to uphold beauty instead. Our appearance has such a large role in daily life that society expects us to be detached and indifferent to molding and changing ourselves to suit its expectations. Shane emphasizes the fact that beauty does not have a standard by delving deeper into the main question: “I’d change my eyes into your eyes, so every time I look in the mirror I could see what it is about me you think needs changing.”

The next part of the poem criticizes the fact that we are loyal to our eyes when it comes to beauty. When our eyes can only do one thing, and that is to see, this becomes the first method we use to judge others. He calls eyes “blacksmiths to our prejudice,” and draws comparisons to people who don’t allow any contrasts to symmetry “in the name of beauty,” as if we want to be rewarded without effort, and grow without trial. Shane wants to remind people that appearance doesn’t reflect what’s inside, that taking shortcuts or finding loopholes doesn’t necessarily make you smarter or wiser. “We forget that muscles don’t mean strength of character. We blur the line between the two and forget that pretty doesn’t always mean nice, the same way beautiful doesn’t guarantee an easy life.”

Shane continues to criticize this mentality: of immediately fulfilling the standards society sets for us by bringing attention to the fact that even children now would rather change themselves than “wait to see who they’ll grow up to be.” Now, he claims, it is finally time for society to evolve its concept of beauty. This old tune we’ve been singing has done nothing but bring us down, because when you ask, “If you could change anything about your body, what would it be? What you’re really asking me is, is there some part of myself that I hate?” Shane implies that at the foundation of a beauty standard lies negativity, because we actively search and obsess over flaws and mold ourselves to imitate what society defines as beautiful, strengthening the idea that we were born flawed.

This specific concept of beauty is in itself a contradiction.  Shane berates the belief that we are customizable like toys, or that it is acceptable for us to want to customize, modify and fix friends, lovers, and ourselves to better how we are seen by society. “Go put your attitude on the cover of a magazine and see if anyone calls it beautiful,” he exclaims. It is a contradiction in that obsessing over appearance does not translate to being beautiful. Shane doesn’t understand how people can act as if they’ll never grow old, as if buying excessive amounts of products of empty promises won’t one day seem ridiculous, and as if growing old were equivalent to misfortune, because that’s how they convince you “you need this.” This concept of beauty is a trick devised to sell you yourself. Beauty is meaningless, because no matter what, appearance does not change who you are. He continues to say that underneath everything you changed to hide yourself, and underneath everything you were born with, you are still the same person. “You are still bound to your own proclivities and perspectives,” he says, “appearance forgives nothing, it cannot excuse you from being who you are. And if who you are has not come far enough to know that then go stand in line with monotony.”

As stated before, taking shortcuts or finding loopholes doesn’t necessarily make you smarter or wiser. You cannot grow without trial, and you can’t become a beautiful person by taking shortcuts, because how you look is only a small fraction of the definition of beauty. Appearance does not reflect character and it cannot hide who you are as a person; it is said that appearance can change easily, but character cannot. It’s a simple thing to aesthetically please one’s sight, but it is “living up to the more intangible qualities in the definition of beauty” however, that makes a person beautiful.

The major issue the poem takes with society is how easily people attach standards. Shane states that standards aren’t necessarily bad, but that they are in fact crucial to society. It is the way we use these standards that sabotage our growth. Instead of trying change our physical forms to adhere to a common expectation, we should instead use those ideologies as checkpoints, to measure how much our ideas and attitudes have grown and evolved. We must be constantly pushing to better ourselves, and not hold on to anything that stagnates our growth. Beauty has no standard, as it cannot be judged objectively — for what one person finds beautiful or admirable may not appeal to another. Upholding a particular standard of beauty becomes a way for society to assign value to people, and an aesthetically pleasing appearance is not a guide to character.

Shane Koyczan’s poem “For Many” serves as a reminder to look “far beyond bone and skin.”