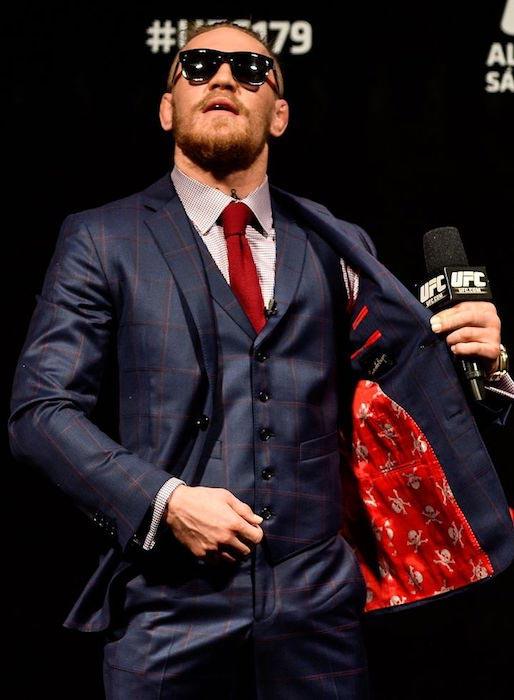 To put it lightly, current UFC lightweight and featherweight champion Conor McGregor is a talker. McGregor’s Irish, and a former plumbing apprentice. The UFC is an American “mixed martial arts promotion company” based out of Las Vegas. The two are a match made in heaven.

Brazen McGregor practically exudes self-confidence. His loud, obnoxious, in-your-face style has won him plenty of fans, and perhaps just as many enemies — not as though that matters: McGregor’s greatest strength seems to lie in his knack for self-promotion. Sound familiar?

Not to say McGregor isn’t an accomplished fighter — at 21-3, his record is stellar. But it isn’t unblemished, a fact that surely contributes to his reputation as a scrappy, dogged competitor. McGregor’s been knocked down, but each time, he’s gotten back up. Moreover, in the process, his self-assurance has never wavered.

Among other things, this is what differentiates McGregor from other more humble fighters of a similar mold (for past, see Georges St. Pierre; for present, see Demetrious Johnson). Namely, what sets McGregor apart is his complete immodesty.

Whether or not you care about UFC, McGregor’s done more than grace public consciousness. If nothing else, people seem to be attracted to the kind of self-confidence McGregor has, in a person. At the very least, given the current climate, they do in a political candidate. Even the people who don’t like him can’t help but obsess over him. Again, the parallels seem obvious.

For now, the partnership between the UFC and McGregor is mutually beneficial. McGregor has no qualms about engaging in the kind of exaggerated trash talk that sells fights, and this in turn generates more money for both parties. Essentially, McGregor speaks in a way that any other athlete in any other sport would likely be eviscerated for, by both press and public. Case in point: McGregor’s repeated promises to “butcher” Alvarez — to end his career by giving him a permanent brain injury.

To be fair, we are talking about a sport in which two fighters attempt to literally bash each other’s heads in; in which the most desirable outcome for the crowd involves fighter A doing more head-bashing, more effectively than fighter B, while nonetheless experiencing severe trauma. Of course, the incentive to do so is clear: top of the bill guys like McGregor rake in insane amounts of money.

As are the reasons to “hype up” fights. McGregor’s near-meteoric rise has been a function of his proving adept at both building interest and by extension, demand. Likewise, he’s proven more than capable of backing his words up.

Love him or hate him, he’s got our attention.

Apparently, McGregor’s a totally different guy in person, and he doesn’t always mean what he says. I’m even tempted to believe that. I just hope, for everyone’s sake, that his political counterpart is similarly so.