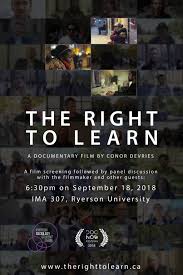 October 4, 2018, marked the beginning of the University of Toronto Students’ Union’s (UTSU) Supporting Students campaign. The campaign is expected to last throughout all of October with other events planned according to its head, Vice-President of University Affairs at UTSU, Josh Grondin. The campaign is aimed at discovering the barriers students face in pursuit of their education.

UTSU kickstarted its campaign with a screening of the documentary The Right to Learn, followed by a question and answer (Q-and-A) session with its director Conor DeVries.

The Right to Learn addresses the problem of Canadian student debt on a local, national, and international scale. The film is the finished product of DeVries’ Master’s thesis for his M.A. in Documentary Media at Ryerson University. Completed in May 2017, the film premiered at the 2018 DocNow Festival in June, and DeVries is currently on tour across Canada screening his film at multiple universities.

During the Q-and-A, DeVries was asked why he chose student debt as a focus for his film. “I always liked the idea of free education,” DeVries said. “I didn’t know any of the facts about it, I didn’t know anything that was in this documentary, but I thought, ‘That’s the way it should be,’ so I heard about this event — I was going to go to it anyways — and I was like, ‘Okay, I’ll go film.’ I can use it for my project as well.”

While filming The Right to Learn, DeVries found this “amazing energy” from interviewing people and organizers. “I started to think, ‘Maybe this can be something bigger,’ you know, so I asked them if there was anyone else I [could] talk to, and then Alan Sears, [Sociology Chair at Ryerson University], was one of the first interviews I had, and it kind of just kept going deeper and deeper down the rabbit hole,” DeVries said. “It wasn’t until my final year [that] I decided on this; the more I believed in free education, the more I believed the system we have now is broken and the more I thought this is an important topic, something really important for me.”

The Right to Learn is an ode to students and their struggle to access higher education. Many students understand their own personal struggles when it comes to affording tuition and the price of living, but the film gives insight on bigger picture ramifications of this struggle.

The film is a sobering reminder that despite Ontario’s policies being in effect to offer free tuition to low-income students, the pay wall to higher education rises each year. The film offers little-known startling facts, such as how annual tuition fees at Canadian universities have tripled over the last 20 years and are expected to rise another 13% over the next four.

Students generally have a grasp of how crippling debt is but what is unknown is how much universities profit off these struggles. Politician and author Joel Harden elaborates on this in an interview during the film. “People ought to know about the fact that 11 university presidents in the province of Ontario make more than the Prime Minister of Canada,” Harden said. “We treat our leaders of universities and colleges as if they’re celebrities.”

The documentary paints a narrative about how Ontario’s higher education sector is adapting to neo-liberal ideals and how those neo-liberal ideals have been pursued in public policy. How they have transformed our society into a fend-for-yourself mentality which has been massively profitable for certain people — but not for students. It illustrates how universities have transformed from a public good into a private one, where students are consumers first and citizens second.

The film also gave an intimate look into the lives of three students — two commuters and one international student. The film shows the commuter students struggling to balance work and school, and how detrimental their financial situation is to their education.

When asking DeVries about challenges he faced in shooting the film, he mentioned filming with the subjects as one of them. “First of all, just to work on someone else’s schedule — they volunteered — I was going through school taking out loans, I don’t have money to pay them … so I’m totally at their whim. And they live crazy busy lives so it’s very hard to just get out and shoot,” DeVries explained. “But then it was also going into Melissa’s[JS1]  home with her uncle and that’s, like, a very vulnerable space and to try to do justice to that. Just dealing with real life and trying to do it justice, with advice from my professors to make sure they were okay with everything.” For clarification, Melissa is one of the subjects of the film.

However, despite these difficulties, DeVries succeeded in capturing their hardships, and, in doing so, added layers of depth into his film.

His film concludes on a hopeful note, as a call to action to the students who are still suffering from debt and balancing work with school. “I think the most exciting thing in terms of talking about tuition fees and the potential of free tuition, is exactly the question of how it might happen,” Alan Sears said. “I think students have to organize in new ways to transform the institutions they [are students] in and to transform society as a whole.”