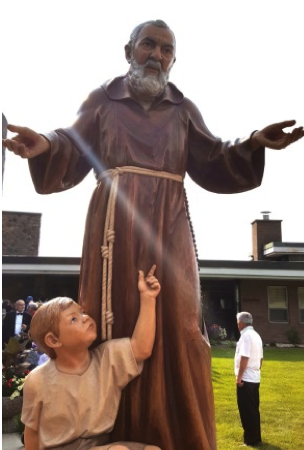 On Sunday, September 16, 2018, many Catholic followers gathered at the shrine of Our Lady of Grace in King City, Ontario, to celebrate the feast day of an Italian saint by the name of Padre Pio. He is known to many devotees as a charismatic and generous leader, but also as someone who was strictly devoted to the Catholic faith. However, Padre Pio is primarily known as the saint who received the stigmata, otherwise known as the Christ-like wounds. After receiving the stigmata, he was constantly under fire by the Vatican where he was accused of committing acts of treason within the church and engaging in affairs with women. Due to these accusations, Padre Pio was banned from saying mass and practicing the act of confession. The legacy that this man left behind involved a lot of controversy, tension between devotees, and unanswered questions about the Catholic faith. However, his presence provided his followers guidance on how to pray to God, how to avoid temptation, and, most importantly, his life story initiated one of the biggest pilgrimages that still continues on to this day.

The moment one partakes in a pilgrimage, a different setting with different feelings and emotions is entered. This was the case for the followers who participated in the celebration of Padre Pio. The whole pilgrimage experience involves something more than merely a religious or spiritual connection — it is beyond that. The focus is more on the purpose of your actions during these events and what exactly they signify. For example, during the initial blessing by the priest in honour of Padre Pio, many followers were placing their household items or previously purchased relics (rosaries, bibles, statues, rings, etc.) near the statue. Why? These objects were given sacredness and constituted the presence of Padre Pio. His value as a saint was transmitted to these ordinary objects as if he was physically there to connect with the community through materiality.

When coming together to participate in the procession for Padre Pio, it’s not a simple process as an onlooker may describe it to be. The main focus of the event is on the saint. Therefore, most of the followers are eager to situate themselves right beside the statue, as if it was the real Padre Pio. The way the devotees (including myself) were positioned during the procession created two different feelings. According to Anthropologist Victor Turner, when a congregation is united and everyone is of equal status and level, communitas is created. On the other hand, when there is tension created between followers or communities, indifference is highlighted and contestation is present. In this specific pilgrimage, Catholic followers were gathered together to celebrate the feast of Padre Pio (communitas). However, during the procession, the main focus was still on the saint, but tension was created because each of the devotees wanted to have their own special connection with divinity. People that were chosen to walk near the statue felt closer than those who were not given the opportunity. For them, the pilgrimage was a lot more authentic and real. The connection became elevated.

Our actions speak louder than our words and why we do the things we do. This is especially prominent when it comes to religious events like processions or pilgrimages that can awaken new perspectives and connections on how to interpret these actions. It is evident that the main focus during these spiritual experiences is to pray and connect to God. However, the way Catholics (and other religious groups as well) do this should be considered and analyzed. Participating in the feast day of Padre Pio provided me something more than a spiritual experience. There was more to learn and connect to than just religion. There were certain concepts and ideas that needed to be reflected on such as: Who was Padre Pio? Were the relics aiding or hindering my understanding of who this saint was? Did the materiality add significance to my understanding of Padre Pio? What kind of experience did each devotee have if some were not chosen to walk near the statue? Did everyone have a similar spiritual connection? When taking part in spiritual journeys one must consider more than just the religious significance. One must think about the critical aspect as well and how this perspective heightens one’s connection with divinity. The next time you participate in a pilgrimage or any religious event (Catholic or not) try to look from an onlooker’s point of view and observe the actions of the devotees and the clergy. Ask yourself what these specific actions signify and how it elevates the experience of a true religious pilgrimage.