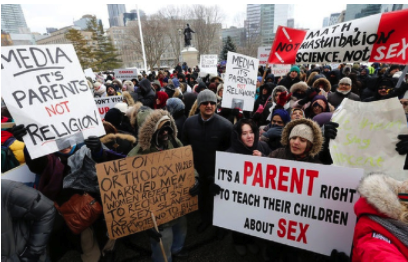 In a press release this summer, Premier Doug Ford said the following in regards to the creation of the “snitch line” for those teachers who defied the rollback of the sex-ed curriculum: “We will not tolerate anybody using our children as pawns for grandstanding and political games. And, make no mistake, if we find somebody failing to do their job, we will act.”

The biggest mistake that Ford made in saying this is underestimating that the children of today are in fact involved in the political environment — much to his dismay and aggressive denial of reality. Indeed, students all over Ontario mobilized just over a week ago in efforts to protest the rollback of the Ontario sex-ed curriculum, as well as for the lack of education on Indigenous issues in schools. This demonstrates that the youth of today are not as innocent and passive as Ford would like to believe.

Another of the flaws in all of this is that the Tory government is criticizing the modernized curriculum for introducing sensitive topics to children at an early age. However, with the vast spread of technology and easy access to information through the internet, it is harder to keep children in a bubble. Now more than ever, there is less of a filter as to what children can view. For example, earlier last year there was a surge in YouTube parody videos which used popular cartoon shows as clickbait for younger kids. These seemingly innocuous videos displayed gruesome themes that were clearly inappropriate for child audiences.

With the increase of access to content on the internet, Ford’s argument of protecting children from sensitive content is redundant and hollow since the exposure to anything online is inevitable, which begs the question as to what he is really trying to “protect.” Instead of repression, young people today should be taught things that will suit the society and times they live in. Ultimately, the image of conservative childhood innocence stands as a ploy to isolate and silence the voices trying to initiate systemic social change regarding sexuality and race/ethnicity. This is why it is within itself hypocritical of Ford to say that children should not be used as “pawns in political games” since the ideology that pervades this motion has political and social implications. Not teaching children about healthy consensual relationships, reproductive health, sexting, cyber-bullying, and the acceptance of different gender identities is intrinsically a political tactic.

This ideology of a preservation of innocence that the Tory government is trying to operate under is not only harmful in perpetuating ignorance but is insulting to the youths of today who are informed, involved, and invested in progressing toward a better future.