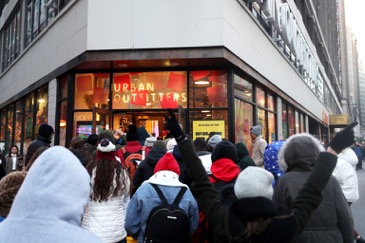 Is it worth the hype?

Ah, Black Friday. A beautiful day full of camping outside of stores to snag a cheap deal, buying things you don’t need that are just irrationally cheap (so you of course decide that you in fact do need it — you don’t), watching Walmart employees get trampled to death, people shooting and stabbing each other to get that one sick deal, and the overall contribution to our materialistic and capitalist society.

Don’t get me wrong, I have nothing against capitalism, or buying nice things, or snagging a great deal. Am I fond of people climbing on top of each other to grab a discounted toaster though? Not so much. Maybe it’s because I personally haven’t experienced the thrill of a Black Friday sale — lining up, rushing in, getting out with that last TV the lady beside you was also trying to grab — and that’s on me. I’m just much too lazy of a person. I can barely get up for classes that probably cost me a couple hundred bucks each, so I don’t know how I’m supposed to get up just for the attempt to get something that I’ll have to pay for — no matter how cheap. But really, when I say getting up early, what I really mean is sleeping in a sleeping bag outside a Walmart (which has cheap prices all year round by the way, that’s what it’s known for), just so that I can snag a great deal. Arizona tea is 99 cents, and it has, and had better, stay that way. If it does, then that’s all I really need in life.

I get that the ‘black’ in ‘Black Friday’ is meant to refer to the stocks of companies going into the black instead of the red — making profits instead of losses — but really with the amount of chaos that happens, it’s not very surprising that people get injured or die during this day. However, this isn’t even why Black Friday was originally referred to as Black Friday! The original reason it was called that was due to how congested it would get because of all the cars and traffic accidents when people went out to shop. There is even a website dedicated to counting the deaths and injuries that occur during Black Friday (http://blackfridaydeathcount.com/). Frankly, I’m not sure if that discount toaster is worth it anymore.

Black Friday also follows American Thanksgiving. Inferior, yes, but both holidays are theirs to begin with. The idea of starting Christmas shopping early is great and all, but isn’t the whole point of Thanksgiving to, oh, I don’t know, be grateful for what you have? To realize that you don’t need all of those materialistic goods to make you happy? Shouldn’t Thanksgiving be followed up with a day that doesn’t make students skip school? (Sorry to all the parents out there, but your kids definitely skipped that class to go get a cheap pair of shoes.)

The absolute worst part though, besides people dying and getting irrationally hurt for cheap stuff, is the fact that, honestly, Black Friday deals in Canada aren’t even that great! Look, the cost for the Greyhound down to New York is not getting substantially cheaper on Black Friday, and I don’t know if that type of commute time and cost of the bus ticket is even worth going to the States to get something cheap. Why is Black Friday not nearly as big here as it is in the States? Because some of our Boxing Day sales are better than our Black Friday sales. In America, the costs of items look like they just decide to change the dollar sign to cents. But here? It’s just like a clearance sale, but for the whole store, and I don’t find the clearance pile cheap enough to think that’s worth it.

Ultimately, if you want to skip that class, it’s up to you, and Black Friday is a good excuse. If you want to bash on the ways of capitalism, go for it. If you really want to snag that discounted toaster, and you think lining up for it is worth it, best to you. I, however, much prefer to stay at home and shop online for Cyber Monday.