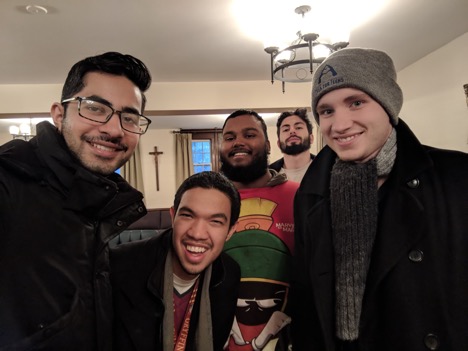 Fulfilling a prayer for hope in small and meaningful ways

Advent is conventionally known as a season of hope; that is, we look forward in hope to the coming of some miracle that would drastically change and fulfill the world. Hope, I think, is quite a tricky concept because it naturally sometimes rests on the premise that “evidence is not always required to assert something.” Hope, in its most profound depictions, is the ability to look at a situation as dire or as impossible as it is, and acknowledge that there is some solution of which one may be unaware. It therefore sometimes requires the acceptance or willingness to engage in some cause, though you may not be there to see the result. Examples of this include modern day prophets like Martin Luther.

Advent by its nature encourages us to espouse this virtue of hope because Christ was born, died, and rose from the dead. It is an encouragement to us to work toward a better world, knowing that we in our own lifetime may not see such an effect. By our nature, whenever we prepare for something (a concert or exam), it is because we are looking forward to a certain result that we believe is within our reach if we try hard enough. Hence, Advent calls to a higher standard of hope, where it does not promise that this result is within our reach. It only promises that our contributions will expedite its realization.

This weekend, Rosa Sanctissimi Prayer Group and residents of the University of St. Michael’s College embarked upon a Day of Service to both the Rekai Centre (retired and/or assisted living) and a street patrol, feeding the homeless throughout the streets of Toronto. As this pertains to hope, such acts express the belief that this is the way things ought to be, and will be sometime soon — a life where one can inculcate sufficient care and concern for another, such that one will go out of one’s way to visit or feed them as the case may be. Pope Francis once remarked, “You pray for the hungry, then you feed them. That’s how prayer works.”

In other words, we normally pray for various vulnerable people as part of prayer for the coming of the Kingdom. Pope Francis reminds us that this requires more active involvement. Hope requires this active involvement. Hope requires us to work diligently toward this better world. In the words of Fr. Henry Charles, it invites us to “keep bridging the gap between the ideal and the real.”

This may not necessarily take the form of some political or ethical movement (though this movement conforms to the idea of hope). Rather, for people in their everyday lives this may take the form of making an extra effort to espouse genuine concern for another’s wellbeing. I think we hear this type of language often by any humanitarian organization, and so it may not seem like a new idea. However, upon looking out in the world, it is undeniable that there is much room for improvement. People still suffer daily from a lack of basic necessities. Others grow in a belief that the world is growing to be more self-centered. Because of this, I think the repetition of some ideas is not yet obsolete. There is still much that can be done within each person to incorporate the gift of hope in daily life, and to actively work toward a better world. Impacting the life of and inspiring hope within one person is a huge accomplishment.

Let us pray continually therefore for the gift of hope. May we not fear to hope, but instead dare to follow its instructions in reaching out to all the vulnerable people and every corner of our lives that may need it.