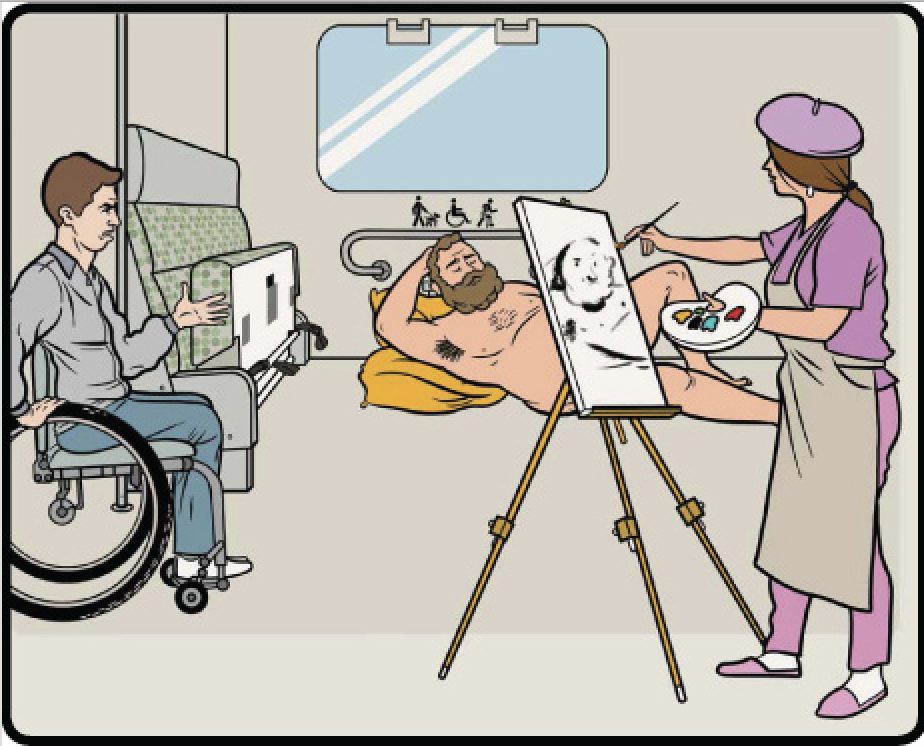 In 1558, Giovanni Della Casa’s seminal book on etiquette, manners, and personal conduct known as the Galateo was published in Venice. In 2017, the officially titled Unwritten Rules of Public Transit Etiquette Written Down was published by GO Transit. Both of these pieces demonstrate the timeless discourse on what constitutes good behaviour and mannerisms, with one of them being a literary masterpiece and the other a sarcastic missive to the everyday commuter. Like Della Casa’s work, GO Transit’s 50-page etiquette pamphlet seeks to address what is proper conduct in a public setting. However, this is where the similarities, unfortunately, end.

The Unwritten Rules of Public Transit Etiquette Written Down, as the title suggests, attempts to adopt a humorous approach to addressing etiquette issues on transit. The text begins with GO Transit’s typical mantra of promising a stress-free and comfortable commute to its riders, stating that the pamphlet was the result of research collected from its “top etiquette scientists” — us, the riders. “Cringe” is a term thrown around a lot on the internet these days, but its characteristically unmistakable teeth-clenching, nose-wrinkling, or gut-churning sensations are brought on in full force thanks to this #etiquettefail pamphlet. It really is nice to see GO Transit attempting to connect to its riders in a more open and honest manner, but the way in which it seeks to establish this connection is ham-fisted, at best. For example, on page 10, the pamphlet describes GO riders as “a humble, tenacious, and sometimes cheery lot.” Sure, the sarcasm here seems to work, but only until you’re reminded that the reason you’re only “sometimes” cheery in the morning is because you only “sometimes” get to school or work on time. As commuters, we know it’s not always fun or easy getting from point A to point B, but when GO Transit itself pokes fun at it in a sarcastic etiquette pamphlet, it only serves to remind you of negative experiences.

Sarcasm is the modus operandi this article employs to convey proper etiquette to its riders, but it just doesn’t seem to work. Not that there’s anything wrong with sarcasm; it’s really one of my favourite ways to joke around and poke fun at something. However, when a transit provider is doing it, it just doesn’t come across the right way. We know a cactus doesn’t belong on a seat, nor a rusty muffler, or a curling rock (seriously, these are all on page 16 in the book). We also know to employ a “closed-door policy” when using a public bathroom (page 86). The pamphlet does well to touch on noise issues and proper conduct in the accessibility coach of the train, but it ultimately spends too much time using a condescending sarcasm for attempted humour at etiquette issues that mainly boil down to common sense among riders.

As a user of GO Transit for four years, I’m certainly grateful to have the opportunity to commute to school in a relatively quick and reliable manner. The #etiquettefail campaign should be recognized for its attempt to connect to riders in a more fun, albeit cringeworthy, manner. The use of sarcasm in the pamphlet left me with a bitter taste after reading it, as it only served to remind me of larger issues beyond rider etiquette that GO Transit and Metrolinx are struggling to resolve. Such issues, as they exist for Stouffville line riders at least, revolve around implementing more frequent service, building more tracks, and addressing the increasing cost of commuting. The recent changes made to the Stouffville line schedule have only underscored these already glaring issues, as it has now gotten to the point where, if you aren’t commuting home during the craze of the rush hour window, you will most likely find yourself waiting for an hour — or sometimes more — in between trains. So while the #etiquettefail campaign and pamphlet address current ridership issues, perhaps these efforts would bear more fruit if they were first directed toward resolving more pressing dilemmas that have only worsened over the years. Is etiquette the real issue?

Angelo Serrentino is a fourth-year St. Mike’s student who studies Renaissance history and Italian. When he isn’t busy with his duties as a Commuter Don, you’ll find him around St. Mike’s campus in conversation or somewhere in a galaxy far, far away, watching Star Wars.