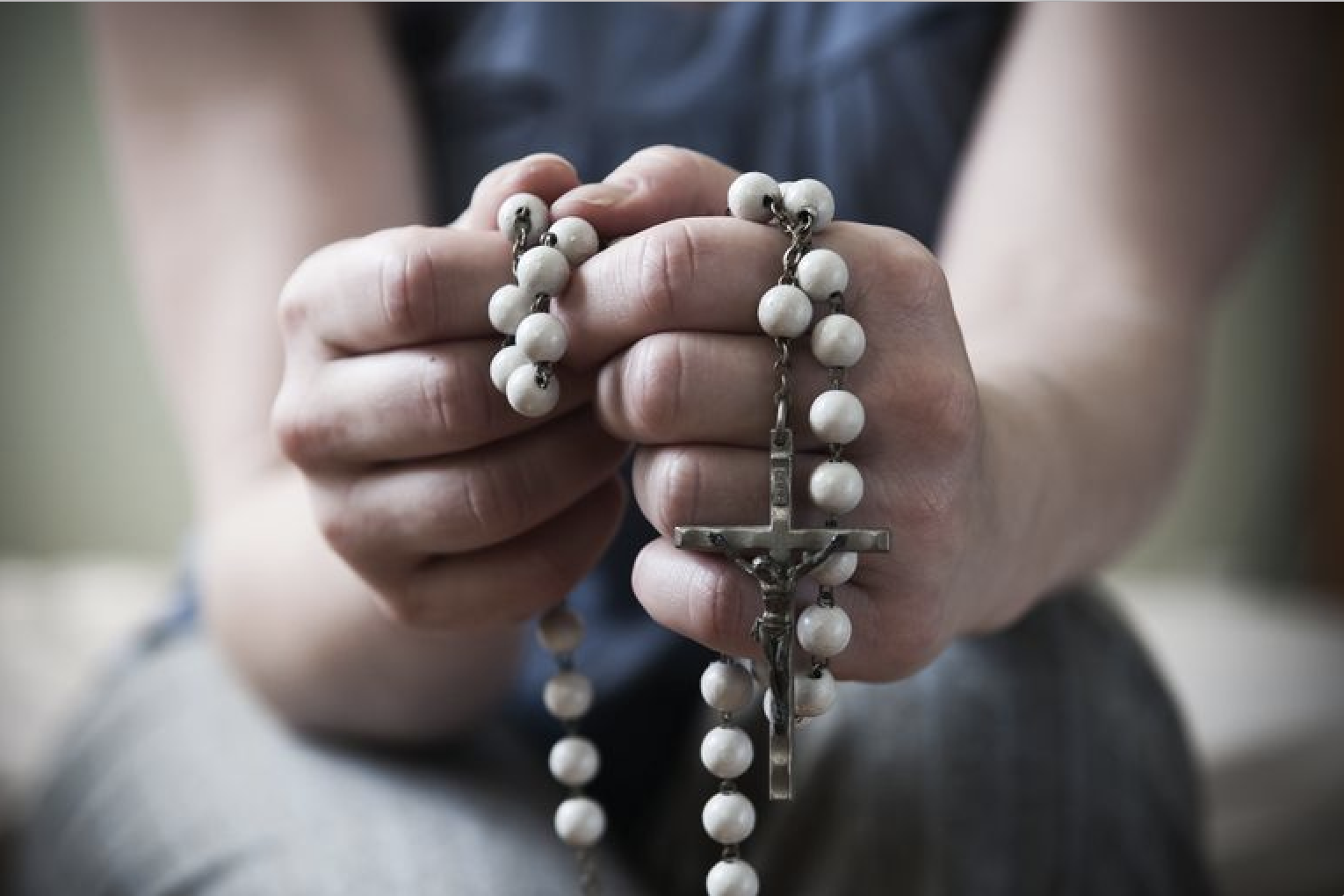 The practice of the imagination in the development of the Catholic Church has been extensive, creative, and fruitful, but also risky and vulnerable to abuse. If we think of the imagination (and I’m backed up by Merriam-Webster in this definition) as something that helps us understand and express concepts that are not present to the senses, then it’s clear that there is a place for the imagination in religious expression. But the question is not just whether or not the imagination has a role in the Church, as much as what exactly that role is. The Catholic Church is an extremely diverse institution, and it contains an immense range of spiritualities, approaches to God, and ways of expressing worship. This range of spiritualities tends to be broken down into what we might call “charismatic” or “traditional”, and I’ll go into more detail about what exactly I mean by those terms later on, but the existence of this diversity of spiritualities is central to an understanding of the role of the imagination in the Church.

So, then, what I have explored in preparing this paper has been the role of the imagination so far in creating this diversity of expression, and secondly, how that development process has formed the Church’s idea of what exactly the role of the imagination is; what it’s useful for and what it’s limits need to be. In order to do this, I’d first like to clarify some terms, and then I am going to examine two chunks of time in particular in the Church’s history: first, will be the very first few decades of the Christian Church under Peter and Paul, and second, will be the Montanist charismatic movement a few centuries later. While both of these events were relatively early on, I’d like to show why they were so crucial in forming the parameters around the use of the imagination that the Church upholds today. So, to define terms. First of all, “Imagination” is a word than can be used with many meanings and connotations, but this paper will be talking about two senses of the word in particular.

Firstly, there is what could be called the imagination of understanding: the need that we have to use the imagination in order to take beliefs or concepts that are abstract (as Merriam-Webster says, “not present to the senses”) and boil them down to make them concrete, accessible and understandable. But secondly, there is what could be called the imagination of expression, which plays a role in the opposite direction. The imagination of expression moves from the concrete and accessible to the abstract, by creating ways for humans as limited and physical beings, with only five senses, to express their worship of the divine, whether it be through different ways of praying, writing music for worship, designing and building churches, or other forms of creative imagination. And the distinction between these two “directions” or applications of the imagination, between understanding and expression, are worth distinguishing, as we’ll see with the Montanists later on.

Now, it is also helpful to clarify what I mean here when I say “charismatic” and “traditional”. “Charismatic” in this sense I would associate with any form of worship that is more spontaneous or unstructured. “Charismatic” Masses would usually be where the congregation has time to pray out loud spontaneously, or even just the music including less traditional instruments like guitar or percussion. “Traditional”, on the other hand, is typically used to describe communities or forms of worship that are more solemn, ritualized, and structured. For example, Masses where the music leans towards chant or organ, even the Mass being celebrated in Latin, or praying the Rosary.

With all of this in mind, then, I’m going to move on to an example of the development of these different spiritualities: the very first few decades after Jesus. John Drane writes in his Introduction to the New Testament that “At the very beginning the Christians met together every day, and their worship was spontaneous… when Paul describes how a church meeting should proceed he depicts a Spirit-led participation in worship by many, if not all, members of the church”. The Acts of the Apostles speak of a community in which “many wonders and signs were being done” (Acts 2:43). This description is clearly of a charismatic community, yet a glace forward to about a thousand years later would show a Church that was much more formalized, standardized and regulated. This shift in practice was largely due to a shift in the imagination of the early Christians regarding the second coming of Christ, or the Parousia.

For the first few decades of the Church, Christians, led by Paul himself, tended to imagine the Parousia as being imminent, at least within their lifetimes. Paul’s writings during this time are radically expectant; he talks about how “the appointed time has grown short; from now on, let even those who have wives be as if they had none…those who buy as if they had no possessions…for the present form of this world is passing away” (1 Cor 7:29-31). In Paul’s mind, if the Parousia was so soon, they didn’t have any need to plan for future generations of the church, so in that context, the description of their charismatic and unregulated worship during this time makes sense; it reflects the intensity and fervour of the imminent end of the world that they were all imagining.

Time wore on, though, and generations of people started to die without the Parousia having happened yet. Paul, and consequently the growing Church, started to realize that maybe the second coming of Christ would not be as soon as they had expected it to be. They realized that if they were to be passing on their faith to future generations, and if it was going to continue growing in members and expanding across the world, measures would have to be taken to establish consistency, and structures created to maintain unity. John Drane explains, “At a time when there were significant debates about the nature of the Christian faith, there was the constant danger that those who were out of harmony with the church’s accepted beliefs and outlook would use this freedom [of charismatic expression] to undermine the faith of the community. Because of this is became necessary to ensure that those who led the church’s worship could be relied upon to be faithful to the gospel as it had been delivered by Jesus and the apostles. By the end of the first century a fixed form of service was in place for the celebration of the eucharist, and other forms of Christian worship were also becoming less open and spontaneous than they had been”.  They started to realize that over time, too much room for the imagination and its creativity in belief and practice could weaken the church, and so the development of rituals and routine were natural responses. This is how the use of the imagination caused the structures that we now term “traditional” to come about, but it was not a rejection of the practices of charismatic expression in themselves. It was a recognition that “because of excess and abuse, the charismatic ideal no longer seemed to be a practical way forward”. Over the centuries, then, while traditional structures developed, various groups still desired to maintain aspects of this “charismatic ideal”, but the way to do that without upsetting the unity of the Church took some trial and error.

My second example, then, is the Montanist movement in the second century. They were a very charismatic movement, but originally their imagination in the expressive sense was nothing to have been condemned in itself; it was a revival of what had been good in the early church, in the hopes that it was still possible. But the Montanists grew to value the imagination of understanding, and the resulting phenomena of visions and revelation, so much that the Church authorities felt that they let their imagination “get away on them”, so to speak, when it came to the charismatic gifts of visions and revelation.  At one point a Montanist author, speaking about the interpretation of these visions, wrote that that “the more recent times should be considered the greater, being later than those of old”, and he quoted Scripture, saying, “ in the last days, God declares, I will pour out my spirit upon all flesh, and their sons and daughters shall prophesy … and the young men shall see visions and the old men shall dream dreams”. But this was a use of the imagination to interpret scripture that began to undermine the authority of scripture itself. This hierarchy of new revelation over the old lead to some of Paul’s teachings being changed by the Montanists, simply on the basis that their revelation was more recent, therefore truer. As Dhiarmaid Mac Culloch says of the Montanists in his history of Christianity The First Three Thousand Years, “It was not so much the content of these messages that worried the existing Christian leadership of the area as the challenge which they posed to their authority”, and authority was necessary for unity.  The use of the imagination had formed the Montanists’ religious expression in a largely positive way originally, but they refused to submit their interpretive imagination, or the imagination of understanding, to the ultimate authority of the church, and so for the sake of unity, the Catholic Church authorities of the time deemed Montanism a heresy.

There is wide space for the imagination in the Catholic Church’s religious expression, that is, in whether they pray spontaneously or whether they pray the Rosary, for example. But practically, for the Church to be able to embrace this variety and still maintain unity, the imagination’s role in understanding, in the interpretation of scripture or personal revelation, must be grounded in certain unchangeable beliefs and practices, among these being submission to the structures and authorities of the Church.  The wide creative potential for the imagination is shown in the first few decades of the Church’s development, but as seen in the example of the Montanist movement, the view of the role of the imagination that the Catholic Church proposes and upholds is this: that the power and potential of the imagination are not simply in its being free and unrestricted; but are better found in imagination that is consciously rooted in unchanging truth.