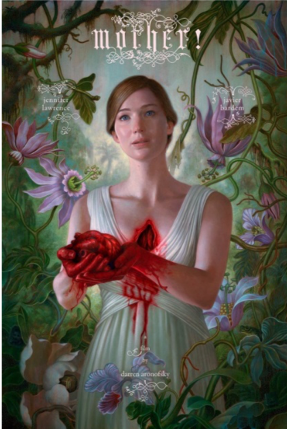 Why everyone should watch Darren Aronofsky’s Mother!

If you’re looking for a movie so intense it’ll stop you from touching a piece of plastic ever again, I’ve got a recommendation for you! Warning, extreme spoilers ahead, but nevertheless I strongly recommend you watch the movie anyway.

Mother! by Darren Aronofsky is a jarring, surreal, amazingly intense film that at first glance, has nothing to do with the environment. You’re left at the end of the movie wondering what you just watched, why you watched it, and what it all means.

The film stars Jennifer Lawrence as the Mother herself, and presents her as a quiet, tame, and loving wife to a famous poet. At the beginning of the film Lawrence is seen to be rebuilding their house, which had been burnt in a fire. The movie goes through a bizarre series of events involving the couple and some unexpected visitors, and quickly becomes a story far removed from reality but based deeply in our own ancient history. The plot supports this by showing the husband gaining popularity for his poetry, to the point where fans begin to invade the house — and he welcomes them into his home with open arms.

What makes this movie so impactful is the symbolism and allegory behind it. Aronofsky creates a fever dream ripe with Biblical imagery, with references to the beginnings of man, using Jennifer Lawrence as an ever-present representation of Mother Nature and the husband (arguably) as a representation of God. The dialogue is rife with demonstrations of our recklessness, the purity of nature, and points endlessly at our arrogance toward the Earth. We see the House, which represents Earth, begin to get populated, destroyed, and disrespected — essentially calling out humanity as the worst houseguests ever.

There aren’t enough words to describe this film for all that it is. Aronofsky, as he demonstrated with Black Swan, is talented in creating disturbing and visually elaborate movies that are more psychological thrillers than anything else. Mother! is all these things, with a strong and frankly frightening message that brings our attention to the state of the planet we live on. Coming away from it, I was deeply confused and a little disturbed, but after doing some research about what the film could possibly mean, I was enlightened; the film is intentionally shocking to highlight the flaws of mankind, and I think it’s fair to say we deserve that. Sometimes something this shocking is needed to get people to listen, to realize that the nonchalance with which we destroy the planet should not be tolerated. This movie does a startlingly good job of making the watcher feel guilty just for existing and demonstrates a completely novel perspective on our place in the world. You’re left wondering what you can possibly do to help, but that doesn’t seem to be a concern of Aronofsky; he is simply telling a story, not calling for righteous action.

All in all, the film teaches the lesson that whether we’re around or not, the Earth can mend itself. Mother Nature will get to work again and fix the house we’ve broken as she has done countless times before. All we can take away from this film is that it’s important to be good houseguests, and even more important to respect your Mother!