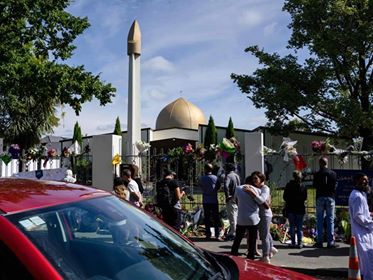 Over a week has now passed since the attack on the Christchurch mosques on Friday, March 16, 2019. One of the most atrocious acts against Muslims has brought the people of New Zealand to a complete standstill, in horror over how something like this could’ve happened in a relatively peaceful country. Since then, 50 people have been pronounced dead and 42 more wounded. During this time, the New Zealand government has worked hard to have the live-streamed footage of the shooting broadcasted by the shooter removed from all online platforms. Platforms like Facebook and YouTube scrambled to have the leaked footage taken off their sites in an effort to respect the privacy of the deceased and those affected by the attacks. In contrast to the United States’ leaders, New Zealand Prime Minister Jacinda Arden has decided after this mass shooting to place a ban on military style guns in the country. Many have compared Arden’s swift decision-making to that of the United States where mass shootings have become commonplace.

The way New Zealand has handled the aftermath of the shooting has been admirable by today’s standards. Along with the ban on assault rifles, there has been immense support from the community; Muslims and non-Muslims gathered at the site of the mosque attacks at Christchurch on March 22 to show their support for the victims as well as their families. An estimated 20,000 people gathered to show their support and stand as a community to begin healing as a community. Imam Gamal Fouda, a leader at the Al Noor mosque that was attacked last week has been quoted saying, “We have shown that New Zealand is unbreakable, and the world can see in us an example of love and unity. We are broken-hearted, but we are not broken,” one of many beautiful sentiments expressed by a survivor of the attack.

However, there have been those who have not been so willing to stand with those affected and instead have shifted the blame to the growing Islamic community within New Zealand as well as Australia. Senator Fraser Anning for Queensland, Australia has caused outrage among the general public of New Zealand and other countries with his claims in a recently released statement. He has cited the “immigration program which allowed Muslim fanatics to migrate to New Zealand in the first place,” as a reason for why there have been growing attacks on the Muslim community post-9/11. Nonetheless, this statement is exactly the kind of justification that allows those who threaten and attack the Muslim community to get away with such heinous attacks on an innocent community. By generalizing the actions of a few, an entire group now stands vulnerable when people in positions of power, such as Senator Anning, believe that they deserve in any way the discrimination and targeted violence that befalls them.

March 23 marks the reopening of the Al Noor mosque, and as it allows people to visit for the first time since the attack, hundreds have gathered to pay their respects. While the President of the Muslim Association has stated that the original plan was not to reopen so soon, he revealed that because of the sheer volume of those who have come to show their support they have decided to reopen early despite lingering damage sustained inside the Mosque so that “the mosque will be alive again,” in his words.