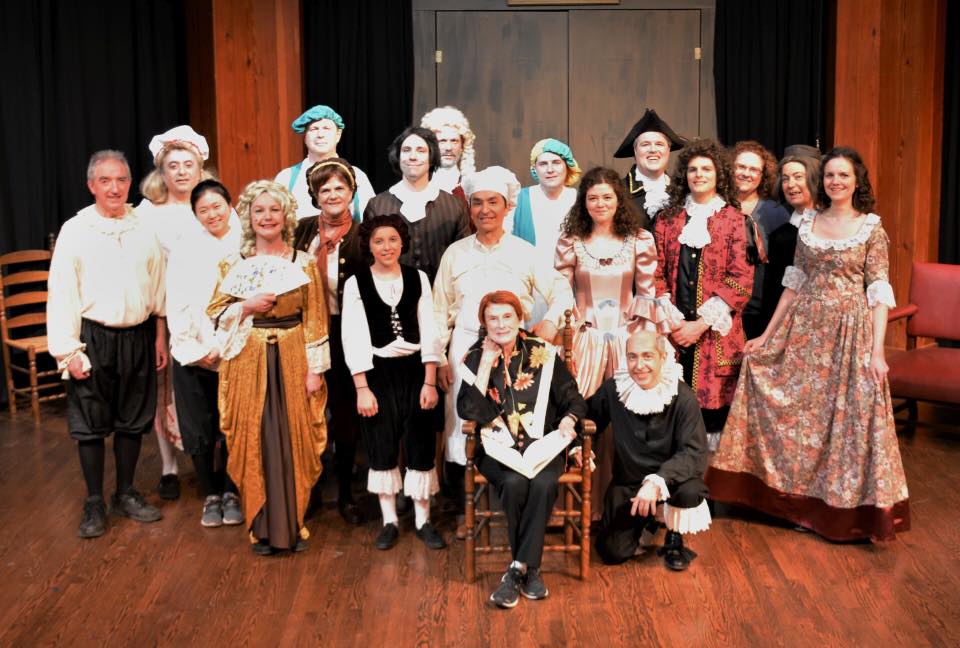 The troupe puts on a dazzling rendition of Molière’s Miser

French is often known as the language of Molière, the stage name of the dramaturge who staged numerous renowned plays for the court of the Sun King in the 1660s. L’Avare, or The Miser, exemplifies the wit and beauty that remain accessible to audiences who speak Molière’s language today. Accessibility was in fact prioritized when la Troupe des Anciens celebrated its fiftieth anniversary with performances of L’Avare in early April.

As the name might suggest, la Troupe des Anciens specializes in French theatre from before the Revolution. Molière’s oeuvre looms large, and this is not the first time that the troupe has performed L’Avare, but rather the sixth. The 2019 production demonstrates the confidence that the troupe has derived from its practice with this piece.

The plot of L’Avare is easily summarized. Harpagon (François-Michel Pellequer) is the miserly Parisian bourgeois whose penny-pinching alienates his children Élise (Lucie Deniau) and Cléante (Hugo Lequertier), each of whom conspires to marry against their father’s wishes. Matters are complicated when Harpagon reveals his intention to marry the very demoiselle that Cléante is wooing. From the first scenes, it is clear that the play will end with a matching set of happy young couples and a ridiculous old man who prioritizes his cashbox above all else.

Despite the foreseeable conclusion of this social comedy, la Troupe des Anciens took pains to provide multiple translation layers for its multilingual audience. A detailed summary of each act was included in the playbills. Additional exposition was provided through the troupe’s extensive social media outreach. Most impressive of all was the choice to project English subtitles on a screen above the stage, in real time with the delivery of the players. The crowd that crammed itself into George Ignatieff Theatre on the evening of 13 April was certainly not entirely francophone. Judging from the frequent peals of laughter in response to subtitles, the translation layers were both necessary and appreciated.

The troupe’s rendition of L’Avare dispensed with some traditional elements of broad stage business, while focusing on the nuanced, implied details of Molière’s script. Pellequer is at the center this canonical text’s flourishes. Before Act I can properly begin, he skulks across the stage, Grinch-like, a spade gingerly held aloft as he prepares to bury Harpagon’s precious cashbox. Pellequer’s true test comes at the end of Act IV, when the theft of Harpagon’s treasure causes the character so much distress that he abandons the four walls of the dramatic space and directly accuses the audience of stealing from him. Pellequer succeeds admirably. It is ironically the miser, with all his vulgar language and terrible insults, in whom today’s audiences can easily see a reflection of real people.

Another standout performance was delivered by Régine Guyomard as Frosine, a “woman of intrigue” who ineffectually plays matchmaker in this war of the generations. Guyomard deploys her grimace and her fan in equal measure to ensure that the audience finds her both sympathetic and hilarious. Guyomard’s precise performance made up for some regrettable occasions when members of the company stumbled over their lines. This is to be forgiven; L’Avare is written in prose, and to quote Hamlet, French prose cannot always be pronounced “trippingly on the tongue”!

The playbill represented fifty years of community involvement in Toronto, as everyone from director Paulette Collet (an inaugural member from 1969) to newcomer Lequertier has dedicated their free time to upholding Toronto’s somewhat hidden francophone community. A handsome hardcover album of the troupe’s performances was on sale during the run of L’Avare to celebrate the company’s anniversary.

If a complaint could be lodged against this production of L’Avare, it would be that no space is made for the piece’s darker undercurrents. In spite of the buffoonery and social subversiveness on display, Molière’s world ultimately permitted very little social and economic agency within a rigidly patriarchal system. This subtext deserves more discussion. La Troupe des Anciens is still thriving through ts fiftieth anniversary, proving hat the Franco-Ontarian community has something to say.