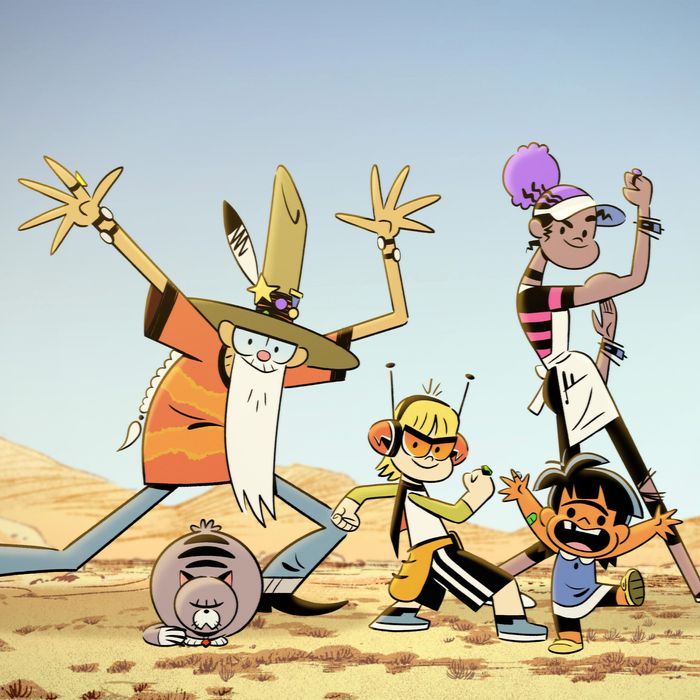 Are aliens coming in droves to attack your town? The toddler down the street being difficult? Your story is not going quite as planned? “Freakin’ out? Breathe it out.” That’s the phrase the main protagonist (“The Kid”) and multiple other characters in Netflix’s ‘Kid Cosmic’ learn to incorporate in their lives throughout the series’ first season.

The animated Netflix series spans 10 episodes, following The Kid and his found-team (found family!) of misfits called “The Local Heroes” as they learn to master their space-crystal-induced  superpowers, while going about their lives in their desert town in New Mexico. The warmth and colours of the art style, all blended in a comic-book, retro sort of aesthetic, paint a vibrant look into the imagination and joy in harnessing a secret and ‘playing the hero’.

What’s amazing though, is that in the 10 episodes released this year, the idea of a “hero” is constantly challenged as the team of 5, spanning a diverse bunch of people of different ethnicities and age-groups (and species!), figure out their place within the story itself.

I won’t go into detail as to what each person’s power is because the show reveals this gradually at the start, and later on, goes into detail as to the sources of power and the implications behind the space-stones. In this vein, the show actively works to subvert the common tropes we find in superhero stories. The Kid, the main protagonist, constantly strives to emulate the standard concept of a ‘hero,’ but learns, over time, to challenge that idea. “Heroes help,” maintains Papa G, The Kid’s grandfather, who also is a part of the Local Heroes team. The show emphasizes empathy. It asks questions about who the “villain” is – what an “alien” means, and who the “other” may be. It asks how, truly, do we ‘help,’ in the scale of things.

It’s brilliant. The show’s creator, Craig McKracken (the guy behind The Powerpuff Girls and Foster’s Home for Imaginary Friends) sets up a beautiful, funny, and refreshing story. It is inclusive, not only in its message, but in its characterization and sharp wit. Each episode is about 21 minutes long, and well worth it (if not for the visuals alone). I would definitely recommend it for all ages – and any person who has, at one point, thought to play ‘the hero’ in their story (in other words: everybody!).