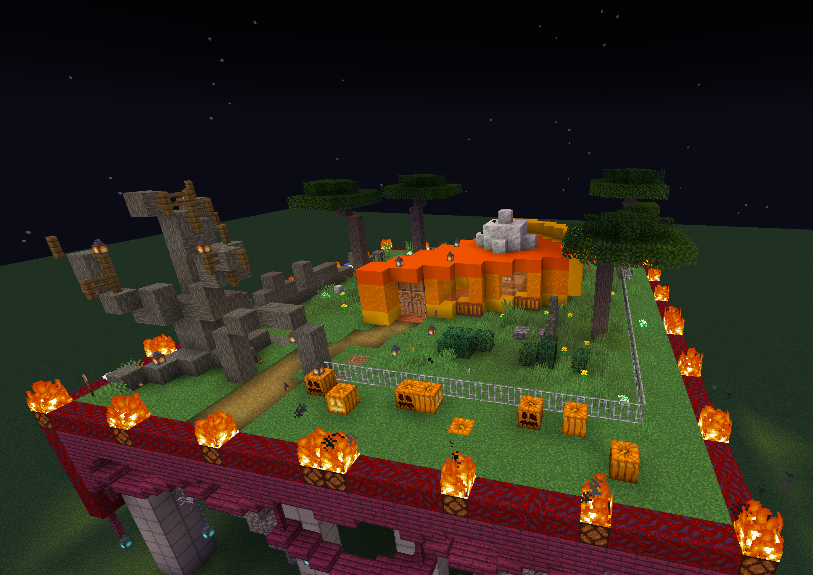 Build SMC celebrates Halloween by bringing students together through community and creation.

To top off this Spooky season, what else but a Spooky Build-Off competition? On October 30th  from 4-6 p.m., members of Build SMC came together (both in-person and online) to create haunting exhibits in 25×25 block plots on the club’s creative Minecraft server.

Build SMC is a club at St. Mike’s that focuses on Minecraft and the community surrounding it. The club has recreated the entire St. Mike’s campus, completely on their Minecraft server — from Brennan hall to the minutiae of the Kelly’s architecture.

This Halloween event started with three build-off time slots, followed by a trip through a Halloween maze designed by the club’s Vice President, Keanu. Members were able to join in through call, and through an in-person get-together at Brennan Hall.

The Mike sat down to interview some of the participants and staff members about their creative process and experiences. The following interviews have been edited for length and clarity.

When asked about what it’s like to realize artistic concepts through the blocky interface of Minecraft, one member, Ray, calls it a fun experience, “The possibilities are endless and you get infinite creative liberty […] So I went with a skull and chose the white quartz block and then added pumpkins, chains and lava around it for spooky effects at the last minute.”

Another member of the club, Kate, agrees with the sentiment, stating that “Minecraft is so fun because you get to shape your ideals!” For her creation, she states that she “wanted to make a dark, shabby house, so I used black with purple for the floor and red wood for the building. I also placed skeleton hoses and wither skeletons to give it a horror feel.”

“More often than not,” says Mateo, a 2-year member of the club, “I’m tempted to recreate the same sort of structures because there are endless possibilities. That can be overwhelming […] I think that people associate anything Spooky or Orange with Halloween, so I picked materials that had elements of both, in addition to more typical building/landscaping materials.”

Another participant in this event, Toby, likens the process of creation to a more relaxing one, “I like these pixel (or voxel) styled arts mainly because they don’t require too many professional skills but still give me enough freedom to create whatever I want. They feel like Color Fill Drawings where you can define your own outlines. Simple yet creative.”

The event itself allowed for a community-centred gathering, framed through the process of creation. Members got to vote on their favourite creations during the event through Build SMC’s Instagram page. This year’s winner was Mateo, with Toby taking the runner-up position.

When asked about the event itself, one member, Jakub, says “It was Awesome! I like the community, the hype, and the energy that is created by all those who participated. The environment they create is sometimes the only reason I come to these events.” He also comments on how the Halloween maze at the end of the event was “a little frustrating with all the dead-ends and sound effects and I would be lying in telling you I did it legit — which I didn’t. Instead, the door glitched on top of the maze and made it over to the end. Like a wise meme once said ‘work smarter not harder.’”

To comment on the in-person aspect of the event, Kate says that “I like doing in-person so that there’s no lagging and I can actually get to  meet people.” She expressed how the maze made her feel dizzy but came up with a unique strategy: “Once I find the place where I get to jump high in the air, I keep jumping until I see the path to the goal. It took so long to find that place where you can jump high, but after that, it was easy to find the goal. The sound effects at dead ends and the warping tricks were interesting and ingenious!”

This year’s winner, Mateo, relates it to his experience with the event last year, “It’s the second time I partake in a BuildSMC Build Competition. Knowing Keanu, I expected some sort of surprise before or after the competition, but that did not take away from the surprise itself. The maze they put together was challenging, frustrating (in a good way), spooky, and most importantly: fun.”

To sum things up, Jakub, one of the Moderators on the Build SMC team says it all: “Events like this tend to be more about the people and less about the builds really. I think the Halloween special [and] the maze [were] a really great effort by Keanu and the team. I thought it was a very creative way to spruce up the event […] it was a really nice and chill experience, and I highly encourage people both in and outside the Build SMC community to drop in to future events even if Minecraft is not exactly their cup of tea.”