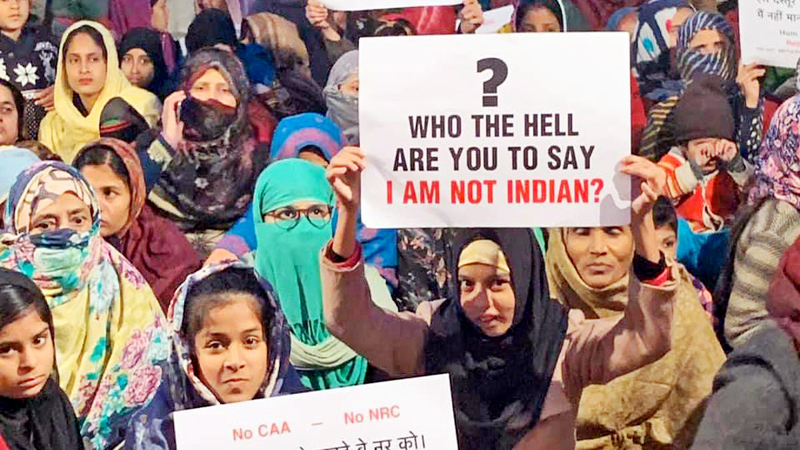 “The whole world is watching!” The chant from Aaron Sorkin’s latest, The Trial of the Chicago 7, bears an uncanny resemblance to our times; it is almost a timely depiction of how circumstances today have shaped human response. The movie had seven individuals on trial, but today it feels as if the entire world faces a trial. A trial that instigates a revolution, against forces that intend to disturb the status quo and perpetuate an environment that exploits power. We see demonstrations and protests everywhere in the world, against all sorts of atrocities, but what intrigues me most is the deeply disturbing and polarized world that my home country, India, has inhabited. It shakes me from within.

The shift in power from the ruling political alliance (UPA) to the National Democratic Alliance (NDA) lent itself to a radical surge in the political climate across the nation. In 2014, the NDA went on to win a clear majority with 336 seats in the general election. The Bhartiya Janta Party (BJP) was the party that secured the highest percentage of votes in this alliance, and their ascent to power marked what would turn out to be a rather controversial nine years. Amongst the many laws passed during the BJP-led government tenure, one that has caught the attention of most of the world is the CAA (Citizenship Amendment Act). The Act continues to draw interpretations and can sway one away from its essence. The Bill seeks to amend the existing Act by further providing that Hindus, Sikhs, Parsis, Jains, Buddhists and Christians from Afghanistan, Bangladesh and Pakistan, who have entered India before December 21st, 2014 will not be considered as illegal migrants and will be eligible for citizenship. Stakeholders in both the Joint Committee and the Parliament (Opposition parties) have raised concerns, arguing that the Bill violates Article 14 (Right to Equality) and Article 25 (The right to freedom of religion) through the specific inclusion of certain religions, excluding others. In this regard, however, it has been clarified by the Home Minister of India as well as the Committee that the Bill does not violate Article 14 as it creates a reasonable classification, based on the object of law. Subsequently, the Bill does not curtail one’s right to practice any religion in the country.

Inevitably, protests plunged the national capital, Delhi. Termed as the “Shaheen Bagh Protests”, named after the area they centred around, the protests saw thousands participate as they sat through the day, chanting and demanding that CAA be removed as a law. The premise of these protests centred around the religious exclusion of Muslims and the implication that the BJP Government intended to assert the dominance of Hindus across the nation. The understanding of this Act has been largely subjective, and material, inevitably, carries bias from the perspective of the writer. Yet, what remains largely empirical is the nature of protests and how they propagated the essence of democracy. The protests lent themselves to the rightful dissent that the population holds towards government policies. However, they were inappropriately organised and led to public dissatisfaction. The protests blocked roads for nearly four months and caused significant public harm. This undermines the protests as a whole, because the very objective of ensuring the best for the citizens is defeated. Furthermore, the government has found links to the PFI (Popular Front of India), an extremist and militant Islamic fundamentalist organisation that ‘organised’ the protests by sending in funding that incentivised individuals to sit through them. The book, Delhi Riots 2020, examines the role of this organisation and the subsequent issues that formulated the Shaheen Bagh Protests. What is important to note here is that the nature of protests should remain civil and legitimise the nature of a democracy, not act to create any sort of divide. Our world is changing faster than ever and we cannot have our tools turn into weapons. We must always remember the whole world is watching.