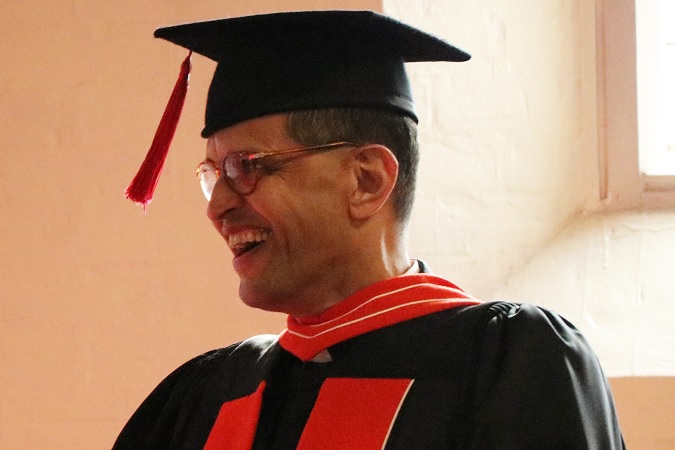 James Ginther DEAN OF THE FACULTY OF THEOLOGY

I had the privilege of knowing Father Mario D’Souza, CSB, for only two years before his untimely death on September 26, 2017. He was my consigliere when I became the new dean of the Faculty of Theology at the University of St. Michael’s College. That he had held this same position from 2009 to 2014 is not the reason I sought his counsel on a regular basis. Nor was it because he had been president of Assumption University of Windsor from 2005–06, nor because he had experience teaching undergraduates (first at St. Michael’s in 1991 and then at St. Joseph’s College, Edmonton, from 1996–99) and graduate students. It was because he saw the world differently than I did, and I needed to hear that different perspective as a dean.

To call Fr. Mario “old school” may sound negative, but I cannot think of a more apt general descriptor of my late colleague, and one of which he approved. His formation as a scholar and teacher reflects a pathway of yesteryear. Born on June 28, 1956, in Karachi, Pakistan, Fr. Mario began his education in the Catholic schools of Pakistan. He noted recently that it was very natural for Catholic and non-Catholics to learn side by side and that he soon realized that education was one way to break down barriers that sometimes differing beliefs can erect. His formation allowed him to traverse the world, from University College, Dublin; to the University of Calgary; to Boston College, and finally to the University of Toronto. It is a pathway that few scholars these days could ever enjoy (and perhaps ever afford), but that international experience permeated Fr. Mario’s worldview.

I also think of Fr. Mario as old school because of his deep love for philosophers like Jacques Maritain, Josef Pieper, and theologians like Romano Guardini and Bernard Lonergan. As an educator of educators, as someone who rubbed shoulders with scholars who talked about policies and practices, Fr. Mario focused on the philosophical roots of Catholic education. I call this old school because it is the product of a slow fermentation of ideas and experience, of the intermingling of philosophy and policy, and it is rigorous and elegant in its literary execution.

But Fr. Mario was not ethereal in his teaching. He certainly wanted his students to reflect on the Catholic philosophy that informed the world of education and to think carefully about the church documents that underpinned Catholic education — but that critical reflection had to have an impact on how teachers developed lesson plans, how chaplains thought about faith formation, and how all Catholic educators ought to embrace the spirituality that had to inform Catholic schools.

Fr. Mario as old school also reflects his mannerisms that made him such a wonderful colleague and friend. It captures his notion that casual dress meant a bow tie; his delightful accent and vocal cadence that made anything he said sound authoritative and absolutely correct; his penchant to cite English aphorisms or to quote an essayist to make a point; and his dry wit that would sneak into his lectures and decorate his comments at Faculty Council and Senate meetings.

Fr. Mario was more than just old school. Above all, he was a priest of the Congregation of St. Basil, one of the founding orders of St. Michael’s. He had been ordained for 26 years at the time of his death. His priestly life was not parallel to his scholarly career, but they were intimately intertwined. When I came back to Toronto in 2015, I had to admit that I did not under- stand the Basilian charism. I knew the scriptural motto — “Teach me discipline, goodness, and knowledge” — but I could not articulate what a Basilian institution should look like. I had spent the previous 13 years working at a Jesuit university in the United States, and much of that time I worked closely with Francis- can scholars from other universities. In a sentence, I could state what the Jesuit or Franciscan charism is, but I was unable to do the same for the Basilians. It was Fr. Mario who taught me, but without any prompting. Instead, I watched him, listened to him, and read what he had written. It soon became clear to me why the idea of a federated university was invented by a Basilian: it was spawned with the desire to engage (and ultimately to evangelize) those who did not share one’s worldview. It was a modern form of monastic hospitality, where the stranger — even the disagreeable stranger — was a welcome guest. The goal was to make that stranger a friend and fellow labourer in higher education. All this I saw in Fr. Mario’s life and outlook: his life was shaped by discipline, goodness, and knowledge to welcome both Catholics and non-Catholics to the conversations he thought were important. Fr. Mario was equally comfortable in the Ontario Institute for Studies in Education as he was in the Faculty of Theology.

I shall miss Fr. Mario’s counsel, his insightful comments, and his laughter. St. Michael’s was made all the richer by his presence, his scholarship, and his friendship.

A memorial mass will be held for Fr. Mario D’Souza on Wednesday, November 1, 2017, at 1:30 p.m. in the chapel at Cardinal Flahiff Basilian Centre, 95 St. Joseph Street, Toronto, ON. All are welcome.