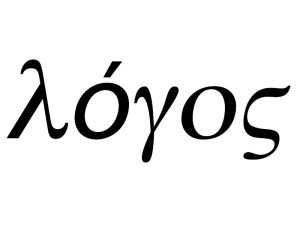 Why the name change?

What was formerly the “Faith and Thought” section will now be called the “Logos” section. Why? Well, in order to give you some context before diving into the reason behind this change, let us picture ourselves in Brennan Hall. Take in the totality of the atmosphere: the strong bouts of laughter from the groups on the couches, the melodic tune of prodigy piano playing, the dryer’s noise in the boy’s bathroom, and much more. Now, depending on the time of day, the student lounge might be full, or it might house no more than three lonely students. Whatever the case may be, among all of the ‘hoikity choik,’ we can assume that the subject of faith and thought very rarely comes up in student conversation. Perhaps the only signs of faith can be found in the pictures of our heavenly friends Sts. Teresa of Avila, Catherine of Siena, and Teresa of Calcutta, along with all of the other lovely images posted in front of our chaplain’s office. Be that as it may, it’d be fair to admit that many of our fellow students don’t take into consideration any of these, which is a pity.

This brings us to the reason behind this section’s name change. The Mike, being our college newspaper, has the honour of representing both students and faculty of the college. Despite our pride for our college’s Catholic roots brought to us by the Basilian Fathers, “faith” (used in a theological sense) is an almost foreign word in regular student discourse. We can always use the word “faith” to describe our hope in something or someone, but how often would we casually talk about our actual faith, as in belief (if we have one), on campus? This is the question that made me think, as editor, after our first issue was released two weeks ago. While distributing copies of our paper to students at Brennan Hall, I listened in to the conversations that took place about our articles (in particular within this section). In all honesty, they were quite interesting and made me rethink the approach I’d like to take. Perhaps, I thought, a more profound and significant name to my section (rather than the explicit “Faith and Thought”) would be more appropriate given the opinions of my peers.

I believe that, in order for this newspaper to give to the students, it must first connect with the students. That being said, making the new name of this section “Logos” is a definite step in doing just that. Let’s make another assumption: not many of our fellow students know what the meaning of “logos” is. Logos is a Greek word, and according to many academic web sources, it’s an appeal to logic and is a way of persuading an audience by reason. This, my dear readers, is exactly what I had in mind when I accepted my editorial position. I believe that there is a definite need of a sort of “reconciliation” between our college and our faith. Furthermore, I believe that this section should be able to connect you, through logical and reasonable means, to a fuller understanding of the beauty of faith; understanding it to be something tangible and accessible to you in everything. This is pure logos, and logos will be our method from now on.