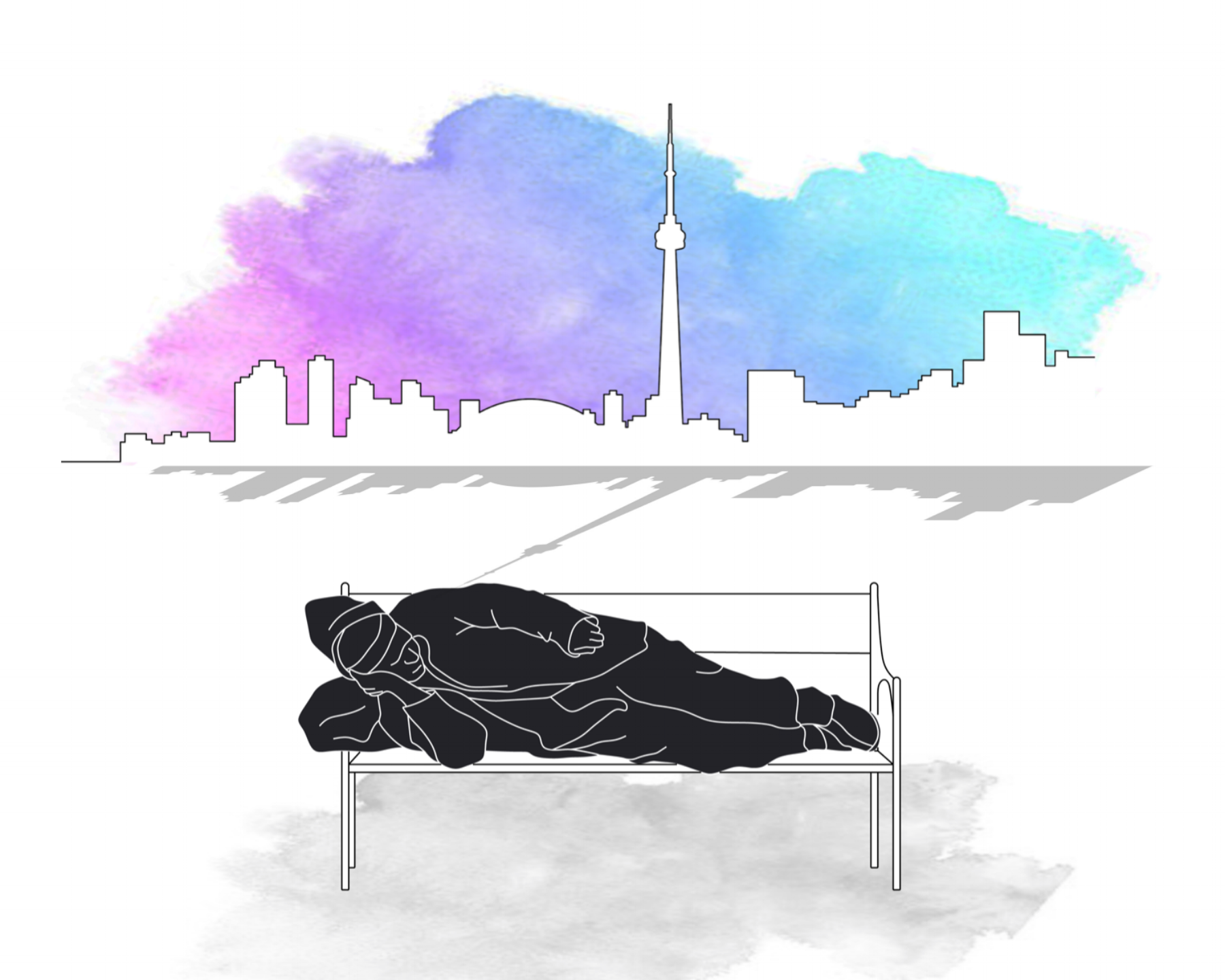 Urban living and homelessness go hand in hand. The bustling culture, the unaffordable housing, and the increasing level of income inequality in the city has led to an undeniable homelessness crisis in Toronto.

The statistics on homelessness provided by the City of Toronto are striking. A total of 5,253 are either sleeping on the streets or in shelters, with almost 500 sleeping on the streets on any given night according to the 2013 “Street Needs Assessment.” 33% of these “outdoor homeless” identify as Aboriginal and 7% of all homeless are veterans of the Canadian military.

The death toll for those without a permanent home paints an even more dire portrait, especially as it gets closer to winter. In the first nine months of 2017 alone, 70 homeless people have been reported dead on the streets of Toronto, with, on average, 1.8 homeless people dying per week. The median age of those deceased is 48.

Over the past few years, the City of Toronto has allocated a significant amount of resources toward combatting homelessness. Ontario recently gave the city $90 million over the next three years for housing assistance and support services. However, this trend of deaths among the homeless, with the median age of death being so low, is shocking for a city with the size and wealth of Toronto. What is clear is that homelessness in Toronto has reached crisis-level proportions. However, the attempt to solve this issue has left city officials baffled.

Toronto Compared to Other Cities

While Toronto has the highest total number of homeless in Canada, it has one of the lower numbers of homeless people per capita. In Toronto, an estimated 0.19% of the population is homeless according to The Homeless Hub. To compare, Calgary, Edmonton, and Vancouver all have higher per capita homeless rates with the homeless making up 0.29%, 0.27%, and 0.27% of each respective population. However, Toronto has recently been dubbed the “income inequality capital of Canada,” and if such trends continue, the city’s homelessness crisis can only worsen.

Emily Paradis, an instructor in the Urban Studies program at Innis College, lists Toronto as similar to many other North American cities in that it’s “a city in which there are intense pressures around the availability and affordability of housing and as a result people with lower incomes and people facing other barriers such as disabilities face major challenges in gaining access to housing markets.”

However, she does identify the Canadian federal government as being particularly poor in addressing homelessness in its cities stating, “That being said, in the Canadian context there’s a considerably lower proportion of social housing provided by the government and by non-profit organizations.”

This is clearly a Canada-wide problem, but what’s particularly concerning about homelessness in Toronto is the fact that in the past 25 years, it’s only gotten worse.

Furthermore, the conditions for homeless people have deteriorated while their numbers have increased. People who face homelessness in Toronto are out on the streets for an average of seven-and-a-half years. The number of “street homeless,” those without temporary housing such as a car or a homeless shelter who have to sleep outside, has increased 24% since 2009.

If change does not happen quickly, these trends will only continue to worsen. A 2015 report by United Way states that, “The very structure of opportunity is changing in [Toronto].”

“Factors like the concentration of poverty, deteriorating job quality and income inequality are driving a fundamental shift in how our city works,” the report continues. The numbers support this, as income inequality has risen 31% in Toronto over the last 25 years, whereas income inequality in Canada as a whole has risen only 14% in the same time period. In Toronto especially, the rich are getting richer and the poor poorer, and with that rise the city has seen its homeless population steadily increase.

Toronto’s homeless do not want to be homeless. According to the City of Toronto, 93% of homeless people polled want a permanent home. However, in the case of barriers to success that impede upon one’s ability to work, such as mental health disabilities or addiction issues, Toronto rent becomes too expensive and social assistance rates too low. The average rent for a bachelor apartment in Toronto is $942 a month, and the Ontario Works monthly allowance for a single adult is only $706.

A general indicator of being in poor economic shape is if at least 30% of your income goes to rent. For adults who cannot work because of conditions such as schizophrenia, a condition that affects an estimated 51 million adults worldwide, their only income may be from Ontario Works and other social welfare systems.

Even affordable housing is not enough, as most of Ontario’s efforts with this fail. A YouTube interview with Steven, a man who has been living on and off the streets of Toronto for about 10 years, explains the problem with many shelters and other housing solutions for those facing homelessness.

“They take a whole bunch of homeless people and stick them in one building and they put them on welfare and they expect there not to be any crime in that building,” Steven said. “Well, of course there is going to be crime because everybody doesn’t work. They’re only making a couple of dollars so they gotta do whatever they can to make a few extra bucks.”

The fact of the matter is that housing alternatives for the homeless tend to be underfunded and dangerous. In New York City shelters alone, there are a reported 32 “critical incidents” a week, or five a day. For many, the risk of dying on the street from the cold are far less great than the risk of being harmed in a shelter.

“Homelessness statistics often tend to miss women,” Paradis said. “For example, homelessness statistics don’t typically count women who are staying in transition houses and shelters or women eeing intimate partner violence. When we count those shelter residents, often women equal about half the population of people who could be considered to be homeless.”

Women tend to stay hidden when experiencing homelessness because for them the risk of violence such as sexual assault are significantly higher. Homeless women are also far more likely to have children with them than their male counterparts, furthering the need for secrecy to keep their kids safe.

According to statistics acquired by the Covenant House, a crisis shelter for homeless youth, approximately 20% of the homeless population of Canada are between the ages of 13 and 24, which accounts for about 7,000 youth on any given night.

Ultimately, housing is the key issue at the heart of homelessness (as the name would suggest). However, there are two key components to housing: temporary crisis shelters and permanent, a ordable housing. The first is key to ensuring that those facing homelessness have a safe place to stay from weather, crime, etc. Permanent housing, however, is a far more long-term, preventative measure for homelessness. As Paradis points out, though, both are necessary in order to treat homelessness.

However, both of these measures take up significant resources, and recently Canada and Toronto have been focusing much more on the former than the latter. However, there has been a push at both the provincial and municipal level to combat homelessness, and this starts with the $90 million Ontario has pledged to Toronto over the next three years. This money is part of Ontario’s Home for Good program, which targets “chronic homelessness,” defined as being without a home for at least six months. The goals of this funding are to eventually [assist] up to 6,000 families and individuals in supportive housing” and to “support the construction of up to 1,500 new supportive housing units over the long-term,” according to the Home For Good Program Guidelines. This program, the most expansive long-term housing plan Toronto has had to combat homelessness in decades, is intended for four major areas: chronic homelessness, youth homelessness, Indigenous homelessness, and homelessness following transitions from institutions such as prisons or hospitals.

The effects of this program cannot yet be judged as the program is in its very early stages, having been implemented as early as spring 2017. However, this is the first step Ontario and Toronto need to take in order to ensure affordable, safe, and permanent housing for thousands of Canadians without a permanent home.

There are many groups in Toronto alone that are fighting to end chronic homelessness. Among the most prominent of these are Trek for Teens, a non-profit organization that raises funds and awareness for homeless youth in Toronto.

“Our goal is to open eyes to the epidemic that teen homelessness has become and make it easier for homeless youth to get out of bad environments,” its website reads. Since its conception in 2007, Trek for Teens has raised over $66,000 for local shelters. What makes Trek for Teens unique is that it is in many parts run by youth, many of whom are still students (here is the link to get involved: http://trekforteens.com/get-involved/). They take both donations as well as hold fundraising events, highlighted by the Trek for Teens Race, which is an Amazing Race-style event.

Another major group, The Right to Housing Coalition, helps to promote housing not as an economic issue but as a human rights issue.

“The Right to Housing Coalition is a network of people facing homelessness, legal clinics, service providers, and scholars,” the group states to the City of Toronto. “We have been working together since 2009 to promote the human right to housing that is a ordable, decent, safe, and secure.”

Paradis, a member of The Right to Housing Coalition, states that the coalition “was asking the courts to recognize that homelessness was a violation of human rights in Canada and that the governments of Ontario and Canada needed to take proactive measures to prevent homelessness and to ensure that citizens have the right to adequate, affordable housing.”

Slightly different from other groups fighting homelessness, The Right to Housing Coalition ghts its battles in court, trying to get the Federal Government of Canada to recognize and act upon its responsibility to provide affordable housing and necessary welfare to those struggling from chronic homelessness.

How Can You Get Involved?

Contrary to what might be popular belief, students can make a real di erence when dealing with homelessness. This can be as small as giving away spare change when you have it, or as big as volunteering with an organization like Trek for Teens.

Paradis says that even small acts of kindness make a huge di erence, stating that the easiest way to help a homeless person is “by showing empathy and compassion for people they encounter on the streets remembering that everybody is a person, everybody has strengths and skills and ambitions, and everybody deserves an equal right to the basic necessities of life.”

We often forget that homeless people are exactly that: people. Showing a level of sympathy that you yourself would like to receive when struggling is the first step toward fighting the stigma that surrounds homelessness, and the backwards notion that people facing homelessness do not deserve our attention and our support.

Secondly, on a more macro level, students can call their city councillors, members of Parliament, and members of Provincial Parliament to advocate for affordable housing, increasing and improving homeless shelters, and for improving the conditions of people facing homelessness. Students are the future of society, and it is with us that the future of human rights rests.

This is a crisis that needs to be talked about. Not as an economic or social issue, but as a human rights issue. For many Torontonians and Canadians alike, it’s a matter of life or death. It’s time we stop looking the other way, and start thinking and working toward a solution.