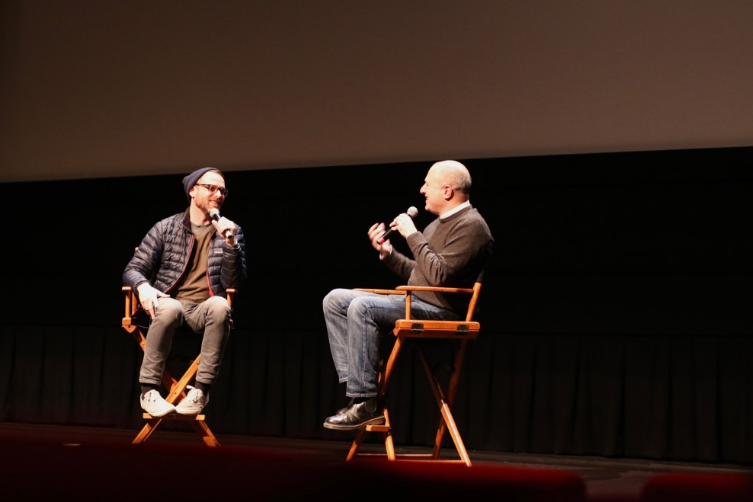 Seven Sundays out of the year, Toronto International Film Festival (TIFF) hosts Reel Talk: Sneak Preview, an event that showcases a surprise film that is yet to be released, followed by a Q&A with the host and expert guest. It is a relatively under-explored Sunday morning activity, which is, in my opinion, part of its charm.

Sunday, November 3, was my first time at the event. Having come to expect film festival-type lineups, I was pleasantly surprised to find a small humble group of film aficionados tucked away in the Allan Slaight Family theatre. Part and parcel of the Reel Talk experience is that you go in unsure of what to expect. So, when host Norm Wilner announced that we’d be watching a neo-noir Americana film, my first thought was that it was a questionable choice for a Sunday morning.

My doubts were set aside five minutes into the film, Sweet Virginia. Set in a small Alaskan town, — really, Hope, British Columbia — what struck me first was how artful the cinematography was. Director Jamie M. Dagg, who was the guest for the Q&A, set the gritty tone of the movie by crafting shots that looked more like stylized art than a small-budget film. However, in the tense opening moments, my fascination with the cinematography was overshadowed by the dramatic darkness (both literally and figuratively) of the scene.

A distinguishing feature of the film (apparent from the start), is that it is motivated by what the characters aren’t telling you (or rather, what the director isn’t showing you). For example, violence was very present in the film, but the presentation of violent scenes was, again, artfully executed. “It was important for me,” Dagg says, “that the violence was non-exploitative. I didn’t want to have violence for the sake of violence.” Dagg achieved this by using distant angles, unbalanced framing, and a lot of reflection shots. This, however, created a rather unsettling feeling that violence was always imminent, which I suspect was the point.

But what brought the China brothers’ script to life (and elevated the indie film) was the potent acting from an ensemble cast: Jon Bernthal, Christopher Abbott, Rosemarie DeWitt, and Imogen Poots. Without giving too much away, Bernthal plays Sam Rossi, a former rodeo champion and now owner of the eponymous “Sweet Virginia” motel. Abbott plays Elwood, a sociopathic drifter and current guest of the motel. The brilliance of Bernthal’s performance lies in his subtlety; he conveys Sam’s pain without ever having to articulate his past. Despite Bernthal’s imposing physique, he is able to effectively portray Sam as a damaged ex-rodeo champ haunted by some past tragedy.

Abbott’s performance, not unlike the rest of the cast, left a lasting impression as well. His character Elwood is surreptitious and alienating, but also adaptive, such that there are subtle yet noticeable changes in his demeanor when he interacts with different characters, and at times, it almost inspires sympathy. The heart of the story, in my opinion, is that Elwood is disgusted with humanity, that is, until he meets Sam. Indeed, one of the more interesting plot devices is that both characters have roots in Virginia (very meta), and this becomes the mainspring to their uneasy friendship, through which they are confronted with determining their respective purpose. But, as is thematic in neo-noir films, there is a distinct blurring of the lines between good and bad, and these characters very much embody moral ambiguity.

“What attracted me to the script,” Dagg explains, “was that the characters that come to inhabit Sweet Virginia [Sam and Elwood], are believable because they are nuanced, morally ambiguous.” Indeed, it is the way the characters navigate moral contradictions that make them engaging, yet enigmatic. When I found myself wanting to understand these characters (including a sociopathic Elwood), I realized that Sweet Virginia is really, at the basis, an enthralling character study.

Sweet Virginia is scheduled to be released on December 1, 2017 in Toronto, and you can catch the next Reel Talk event December 10, 2017 at the TIFF Bell Lightbox.