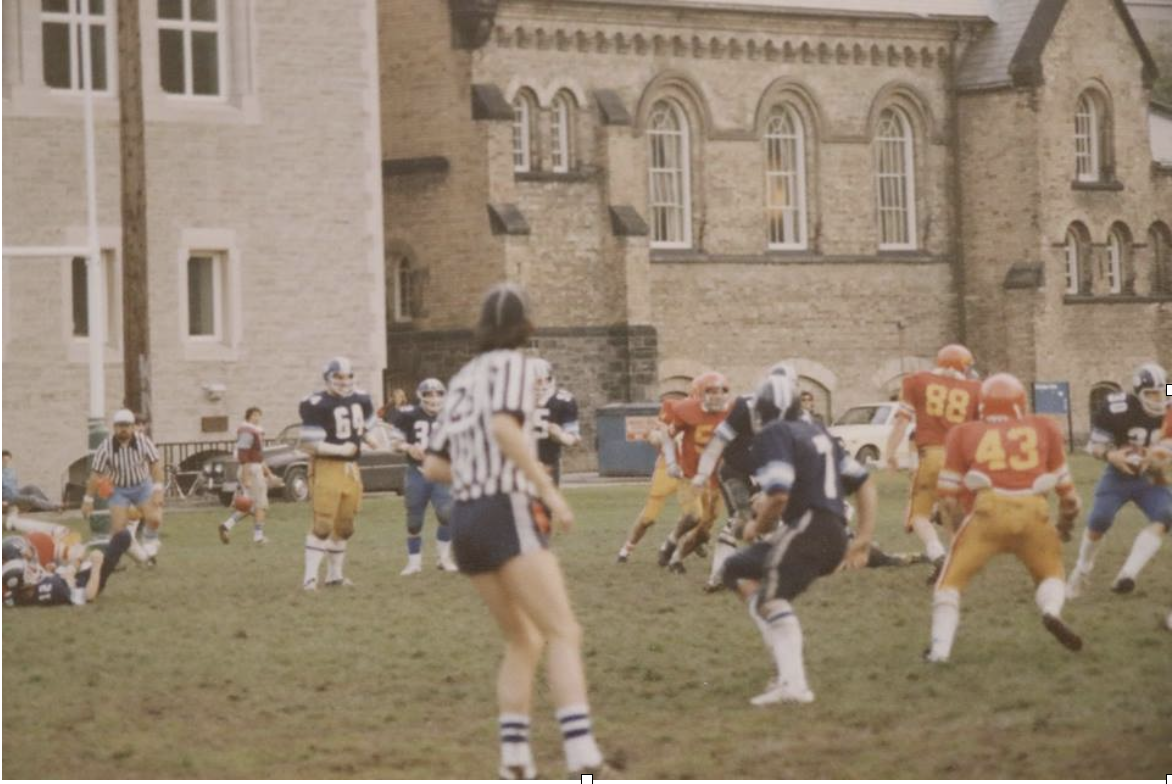 Football used to be a major part of the USMC experience; now, alumni-student events remind us it’s a storied one

The 49th Annual Boozer Brown Football Tournament took place on October 22. This alumni vs. student football game is an opportunity for former University of St. Michael’s College (USMC) students to come back to the school for an afternoon of football, soccer, and food. Each year is an opportunity to connect with alumni young and old and subsequently build relationships. I have been lucky enough to make it out every year that I have been a student at St. Mike’s and the turnout is always different and interesting. This year, a majority of the players that came out were alumni who had been on the varsity football team in the last 10 years. In years past, the game has been played with current students and alumni many decades removed from the lecture halls of the University of Toronto (U of T). This game may not be the oldest tradition at the college, but it is growing every year to include more and more students and alumni.

For the past three years, there have been both a touch football game and a soccer match played back to back. Both of these are excellent opportunities for current students to get connected with the alumni from the college. The benefit of being able to get out on the field and play is tremendous. Being able to compete with and against other members of the St. Michael’s community makes it so much easier to get to know those people who made it through St. Mike’s five, 10 or even 50 years before you.  Although it can be daunting to participate in events geared toward alumni engagement, the payoff can be great. An event like the Boozer Brown Football Tournament offers a great opportunity for anyone to come out and be a part of St. Michael’s long football tradition while interacting with all sorts of different alumni.

The game, refereed by St. Mike’s intramural legend and former Toronto Argonaut Lex Byrd, celebrates the long football tradition at St. Michael’s. From 1895 until 1993, the college fielded an intramural football team that competed for the Mulock Cup with the other colleges and professional faculties at U of T. This league was a fully padded, full-contact league that played once a week. It was disbanded in 1993 due to insurance concerns from the university. The Mulock Cup became the intramural rugby trophy awarded to the winner of the U of T intramural rugby championship every year. It is the oldest trophy in Canada that has been awarded without interruption. St. Mike’s was a perennial contender during the final decades of the cup and brought it home across Queen’s Park for the final three years that the college fielded a football team.

Prior to the separation of the school into a high school and the college in the 1950s, it fielded championship rugby football teams in the junior and senior leagues in the city. The tradition of football excellence has continued for what is now called St. Michael’s College School, with the school winning four Ontario high school football championships in the past 15 years. For the college itself, football has faded somewhat from the position that it held prior to 1993. However, there are 20 St. Mike’s students that are also members of the varsity football team. The role of football at St. Mike’s is certainly not what it once was, but there is still an opportunity to engage with the St. Mike’s traditions. Get out and join the intramural flag football league, go watch a football game next season (free with a TCard), or maybe just come out next year for the 50th Annual Boozer Brown Football Tournament. It’s a great opportunity to get out, meet alumni, and participate in what is left of one of St. Mike’s greatest sports traditions. And if football isn’t your speed, at least you can come out, play some soccer (another type of football), and share some post-match food with your fellow USMC students, both past and present.

Sam MacMillan is a fourth-year USMC student studying Peace, Conflict and Justice. He’s also a member of U of T’s varsity football team. He was the Don of Mallon House in Elmsley Hall last year.