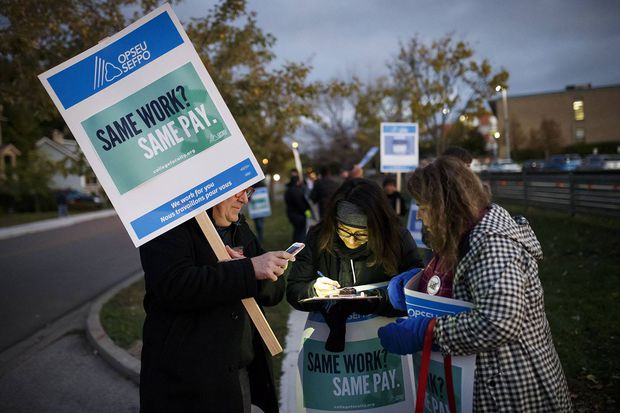 I enrolled in full-time studies at Humber College North Campus for Fall 2017. I really enjoyed the first 35 days of the Paralegal Education program; but on October 10, the Ontario Public Services Employee Union (OPSEU) declared its intention to strike to the College Education Council (CEC). On the evening of October 15, I learned that the OPSEU was officially on legal strike. That didn’t seem like a big deal at the time.

I “survived” the Winter 2015 strike at the University of Toronto (U of T). Some students barely remember their experience because they were largely unaffected. I am one of those students. For me, CUPE 3902’s Unit 1 strike meant that my tutorials were cancelled and any marking was backlogged, but I still attended class, completed tests, and submitted assignments. I anxiously relied on semi-regular strike updates from central administration via their Facebook page and other websites. My instructors permitted my peers to modify syllabi. The university permitted its students to use the credit/no credit feature. Undergraduate students actually supported Unit 1 by wearing pins and hats, participating in a classroom walk-out, and the like. That is a sunny contrast to the Humber strike.

During the Ontario college strike I have realized that a sizeable amount of students at Humber are unaware of the meaning and purpose of a strike. This was apparent when our elected student society, IGNITE, interviewed several students on campus about the strike. There was confusion as to why the faculty would strike outside of summer, and why students were not being considered in this decision to strike. Online discussions on the Humber College Facebook page and other related pages demonstrated a lot of misguided and misplaced resentment toward the faculty by the students at the beginning of the strike. This is likely due in part to the fact that the Ontario college strike was minimally addressed in advance by both our elected student society or administration. Instead, my instructors initiated conversation on this topic when they expressed concern for the impending strike and offered to answer as many inquiries from students as possible in the interim period. I was surprised to learn that a strike could result in the extension or loss of a semester because college program’s learning outcomes simply cannot be amended. If a semester is lost or extended, students would have to pay for — at the very least — unanticipated housing and living expenses. Graduation would be delayed. Work opportunities may be missed. These things were never seriously considered as potential results of the Winter 2015 strike at U of T, even when it approached its final 28th day.

The Ontario college strike is history in the making. It has affected 12,000 faculty and 500,000 students across the Ontario college system, making it one of the largest strikes in the Ontario post-secondary system history. It may also be the longest, given OPSEU’s strained relationship with CEC coupled by the provincial government’s unwillingness to intervene anytime soon. It is important to note that no Canadian post-secondary institution has ever lost an academic term due to a strike, but in similar instances the semester was extended and winter break was reduced. Algonquin College recently advised students not to make winter holiday travel plans, and I advise the same of all Ontario college students. But that’s only if the strike doesn’t continue into that period. Although Ontario colleges have been adamant that their students will not lose the semester, faculty has not seen a tangible plan. SOS!

Jessica is currently a student at Humber College. She works as a Compliance Analyst for both the G7 and G20 Research Group at the Munk School of Global Affairs, and will soon be joining the Canadian Armed Forces Reserves. She graduated from USMC in June 2017. She was Vice-President of the St. Michael’s College Student Union (SMCSU), Co-President of Get REAL University of Toronto, USMC Director at the University of Toronto Students’ Union, and involved in St. Mike’s Orientation.