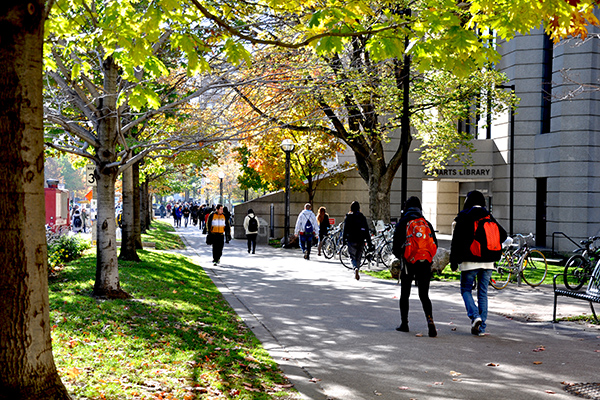 Spate sparks debate: are students choosing Canada over the US because of Trump, or has Canada and U of T’s reputation grown?

A dramatic increase in the number of international students at the University of Toronto (U of T) has many wondering why the sudden attention, and what this bodes for the future. Much speculation has arisen as to where this interest is coming from: Is it a general demand for Canadian universities, U of T’s reputation, or does it have more to do with recent global developments?

“International applications to first-entry programs have more than doubled in the past five years and continue to increase about 20% per year,” states Richard Levin, Executive Director of Enrolment Services at U of T. Clearly, students are choosing U of T more than ever before, so the next question is where are they coming from? According to the “Facts and Figures 2016” report released by the university, as of 2016, 14,467 undergraduate international students were enrolled; primarily from China, India, South Korea, the United States, and Hong Kong. Of these countries, China made up the vast majority, with 9,187 students enrolled in 2016. Graduate students follow a similar trend, with 2,985 in total and 1,057 of them from China.

There has also been debate as to whether the election of U.S. President Donald Trump has spiked interest in American students. Among those interested parties is The Globe and Mail, which, in its recent Canadian University Report, wrote an article regarding Canadian universities as a growing destination for international students, highlighting U of T and McGill. They attribute increasing numbers not as a response to Trump, but to a genuine interest in Canadian schools and multi-culturalism, as well as the relatively lower fees charged in comparison to American universities.

This is evident from an interview within the article in question, where it is revealed that, “There’s a real surge in interest from around the world,” says Ted Sargent, Vice-President, International, at U of T. In addition, more of those top candidates are accepting offers to attend and are enrolling, he says. “So, their interest in us is very genuine. They’re not just scattering applications around. This seems only partly due to the United States falling out of favour for some students and more a result of Canadian university recruitment.” U of T is actively attracting international students, and it seems that students are responding, often regardless of political situations.

Hans Xu, a first-year computer science student from the United States, affirms that view. “The tuition is relatively cheaper when compared with U.S. universities, and there are so many research opportunities in Toronto. Toronto is probably the most international city in the world,” says Xu. When asked why U of T in particular, he cites his reasons as the university’s “good program reputation and its repute for being an academically rigorous university.”