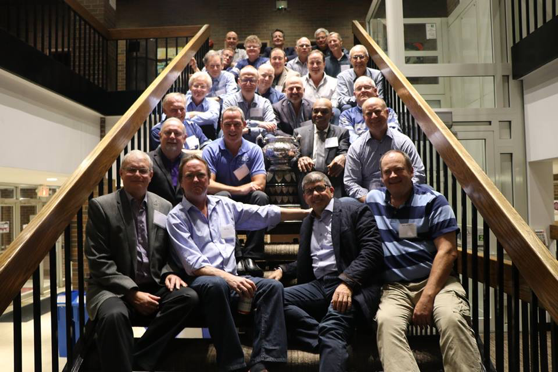 It may be difficult to believe, but over 30 years ago, some 400 St. Mike’s fans packed the stands to watch their intramural football team win the Mulock Cup four years in a row. For those who do not know, the (now defunct) Mulock Cup is the oldest trophy in Canada, and was awarded to the best intramural football/rugby team within the University of Toronto (U of T).

The four years from 1981–85 were especially important to the group of men who did all the work in securing the Mulock Cup for the University of St. Michael’s College (USMC). These men, who were reunited at USMC on October 14, shared some stories over dinner and revealed their past and current success.

One of the points stressed by these men was the commitment each player had to the team, especially the “dayhops” (commuter students).  The team practiced most days of the week, on the field now occupied by the 1080 Bay St. condominiums. Games were played with full equipment, and several of the men recounted stories of the big hits they took while playing.

Today, there is a much different story. Tackle football has not been played intramurally at U of T for several years. In fact, even rugby, which became the only full-contact sport played in intramurals, was recently discontinued in its full-contact form. The type of football that these men played, and the difficulty with which they did so, is unparalleled in our modern university life.

Of course, a completely serious and unflinching football team is not the whole story. In fact, several players informed me of a tradition which the rookie players took part in each year. The “rookie run” was a way of introducing the first-time players to the St. Mike’s and Loretto community. It involved the players running completely naked, save for cleats and helmets, across Queen’s Park, down St. Mary Street, and up Bay Street, much to the joy of the senior players and other students.

Another tradition joyfully remembered at the reunion included both the songs and nicknames created by the team. The songs ranged in theme and subject, but perhaps the most memorable one recounted the days of the week and the events that occurred on each day; from practice to gameday, to, of course, church on Sunday.  The nicknames too were varied, but were all connected by their proprietor, Head Coach Lex Byrd.

Byrd was almost certainly the star of the reunion. His legacy as head coach of the USMC intramural football team from 1978–93 will not soon be forgotten, and neither will the impact he made on his players. Byrd played for the Toronto Argonauts before coming to USMC to begin his coaching career in 1978. The connections he had with the Argos allowed him to call in other coaches from all over the CFL to help him win his eight total Mulock Cups.

Over the course of the night, the players made their gratefulness to Byrd known, and showed him how much his coaching and leadership meant to them. Byrd continues to be involved with USMC through his annual refereeing at Boozer Brown, a football game that takes place between alumni and current students.

As a current student, this reunion was an enlightening experience. Just being in the presence of such St. Mike’s spirit, such enthusiasm for a trophy won 30-odd years ago, was heartening.  The night started with one of the most confident Hoikity Choik’s I had ever heard, all from men who had not seen each other or the school for several years. The energy in the room was contagious, and to relay a message from several players, it was like they never left at all.