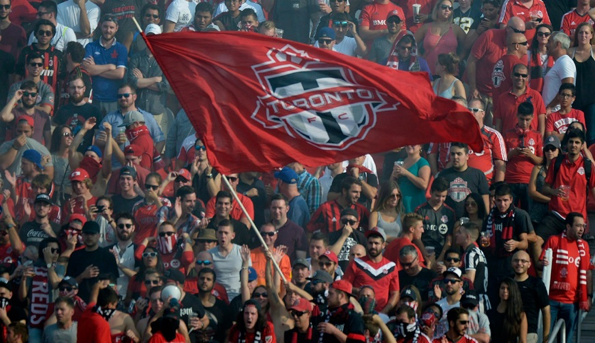 Something for fans to get excited about coming into a promising playoffs.

The Major League Soccer (MLS) playoffs are already in full swing, but Toronto fans won’t get to see their team play until October 29 against the New York Red Bulls in the quarterfinals of the tournament. This will be the first playoff meeting between the two teams in history.

Toronto FC is coming off not only with the team’s greatest season in history, but the best season in league history officially after a 2–2 draw in their last match against Atlanta United. That point means that TFC finished the season on 69 points, one more than the 68 that the 1998 LA Galaxy posted in the shootout era and the 67 points that the LA Galaxy posted in 2011 in the post-shootout era. This of course means that TFC won this year’s Supporters’ Shield for the best regular season in MLS and were the first Canadian club to do so.

Toronto also won this year’s Voyager’s Cup in the Canadian Championship. With both trophies already in the cabinet, Toronto has an opportunity to complete the first treble in MLS cup history if it can lift the MLS trophy at the end of this year’s playoffs. That would certainly cement its status as the best MLS team in history for a very long time.

Of course, all this is easier said than done. TFC had a rollercoaster of a playoff last year with a huge blowout victory over New York City FC in last year’s quarterfinals before overcoming several deficits in the semi-final in what was perhaps one of the most entertaining ties in recent memory against the Montreal Impact. Of course, their season ended in defeat at home against the Seattle Sounders in a heartbreaking penalty shootout during the final.

This year Toronto has built on that disappointment by adding a tremendous pool of depth to choose from, which has catapulted the team into its best season. New additions to the back line like Congolese international defender, Chris Mavinga, as well as Lichtenstein international, Nicolas Hasler, have added stability and experience to an already solid defense. Victor Vazquez has had an incredible first season with the club by providing 16 assists in MLS (only one off the pace of NY Red Bulls’ Sacha Kljestan).

However, the team has been looking within its own setup to find new pieces, which explains the emergence of youngsters like Raheem Edwards, who has shown an incredible amount of talent and potential in the limited minutes he played this season. But it’s not just the new additions that have strengthened the team.

Players like midfielder and captain Michael Bradley, forward Jozy Altidore, and especially players like Justin Morrow, have seen their production and influence on the field grow in terms of importance, consistency, and quality.

All of this has culminated into a squad whose depth allows for numerous changes to be made when necessary because of injury, suspension, or national team call-ups, without losing the identity or quality of the team. Looking back at this season, Toronto must be optimistic. It is looking to repeat with an appearance in the finals and have the regular season to prove that it is the favorite this year.

On a side note, TFC already won a third trophy this year; the Trillium Cup. It is the trophy awarded to the team with the better head-to-head record between TFC and the Columbus Crew.

In all honesty, the trophy was an MLS attempt to spark a rivalry between two teams that never had one or a reason to have one, so most fans on both sides never cared much for it. The reason I’m bringing it up is because it is an opportunity to ask those interested to look up the current situation of the Columbus Crew.

The crew’s current owner is looking to move the team to Austin, Texas. Although I have no personal love for the Crew, this kind of action is deplorable. Thus, I ask any and all TFC or MLS fans to show support for the Crew and find any ways to help if possible.

Fans are united and off the pitch we need to show that.