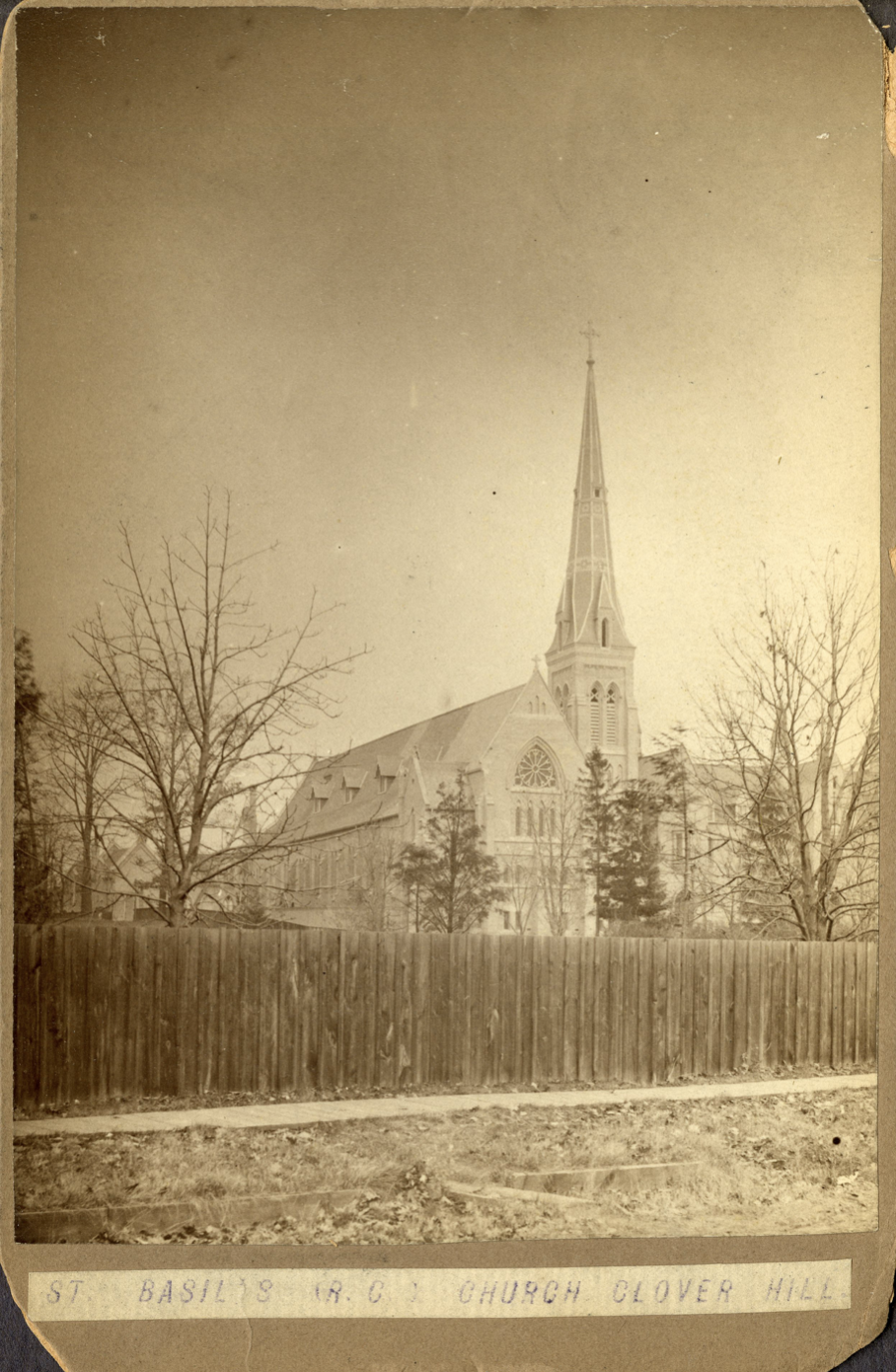 Higher Learning: The Storied Past of USMC and the Basilian Order

As I read the most recent issue of The Blue Banner, the St. Michael’s College School’s (SMCS) Alumni Magazine, I couldn’t help but feel pride in knowing that my family is one piece of the multigenerational bond that is the Basilian Tradition. (SMCS is the private Catholic all-boys university preparatory school of USMC. It is under the direction of the Basilian Order in Toronto on Bathurst and St. Clair.)

Growing up as the only female cousin on my dad’s side of the family, I was surrounded by St. Mike’s “Old Boys” (SMCS alumni): from my dad, John Orsini ’77, and my uncle John Grilli ’78, to numerous cousins who talked about attending SMCS as children and have since graduated (Robert Grilli ’12, Joseph Orsini ’13, Mario Orsini ’15, and Thomas Grilli ’17).

Our family Christmas meals were boisterous with debates about sports and politics, and fond recollections of life at SMCS. I felt left out of the conversation because my cousins were either looking forward to continuing the tradition or were already in the midst of realizing it.

I so wanted to become a part of this inner group, and expressed my devotion by learning the “Hoikity Choik” at a young age, attending their annual Homecoming, and wearing my dad’s oversized SMCS sweater. My desire to join was finally realized when I chose SMCS’ sister school, Holy Name of Mary College School (HNMCS) as my high school. But enough about me.

In order to fully appreciate the multi-generational impact of the St. Mike’s tradition, we must first step back to the humble beginnings of the Basilians, as represented in Laurence K. Shook’s Catholic Post-Secondary Education in English-Speaking Canada, and in discussion with Fr. Burns, CSB.

The History of the University of St. Michael’s College

The Basilian religious order began in France in 1822 and spread to Toronto. Fr. Burns explains the Basilian mission in Toronto thus: “The European immigrants such as the Irish, Italians, and Polish had a very basic education system. With the Basilians’ assistance, they went from agricultural workers to Catholic leaders.”

In 1852, Bishop de Charbonnel (see Charbonnel Lounge in Elmsley Hall) founded the University of St. Michael’s College (USMC) on the grounds we walk on today, with the assistance of John Elmsley, so as to provide a Catholic education to men in Toronto.

Originally, the Basilians adopted the eight-year educational system from France that combined high school and university. But changes were necessary when they fully merged into the Ontario school system. Fr. Henry Carr, the Superior of USMC from 1915–25, helped introduce the division between high school and university in order to better serve the Catholic population.

The high school and USMC operated in the same building known as “Clover Hill.” St. Michael’s College eventually outgrew its facilities, and on September 10, 1950, the high school moved to its new location at St. Clair and Bathurst.

It wasn’t until 1912 that women were allowed to attend USMC. However, it took almost a century after that to create a collaboration between the Basilian Fathers and the Felician Sisters to provide an all-girls Catholic education experience for grades 5 through 12. In 2008, Holy Name of Mary College School (HNMCS) opened its doors and provided the opportunity for SMCS alumni to give their daughters the same Catholic educational experience that they and their sons had enjoyed for years at SMCS.

Marilena Tesoro, Head of HNMCS, and a USMC alumna, believes the decision to create the female high school equivalent to SMCS was a direction for “St. Mike’s to blossom into the 21st century.” “The two religious orders have similar values, but yet are so different in how they educate their students due to the different sexes,” she continued. “Still they were able to bring all of that together, those charisms, under one-fold with this school.” Tesoro believes it was God’s plan that she was called to work at HNMCS — the culmination of her lifelong USMC friends and her positive experiences at USMC.

Personally, I was thrilled to be a student at HNMCS because in addition to all that the school offered to me, I was finally able to contribute to those SMCS discussions at the family dinners and bring arts into the conversation.

Building the Bridge: Hearing from You

The Basilian influence and the high school experience of the SMCS “Old Boys” contributed to some wanting to continue the tradition at USMC. Both my father and my uncle are proud graduates of USMC and continue their involvement in the Basilian tradition. John Grilli, SMCS ’77 and USMC ’82, quarterback for both the SMCS Kerry Blues and the U of T Varsity Blues football teams, lives the motto coined at SMCS: “Tradition Never Graduates.” When asked why he is still heavily involved at SMCS, Grilli said, “I really do care about the legacy of SMCS because somewhere down the road my grandchildren may go there. Who would have thought that my nephew would have gone there, and even my brother-in-law. St. Mike’s, whether at high school or university, touches people in a lot of different ways.”

My father, John Orsini, continues to participate at HNMCS events as an SMCS alumni representative. “I never thought I’d be able to give the same opportunity to my daughter as I experienced at SMCS,” he said. “I am so glad the Basilians were forward thinking to include our girls in the fold.”

There are also plenty of current “Old Boys” that have decided to continue the Basilian Tradition here at USMC. Two of them had this to say: “I chose to attend USMC primarily because I attended SMCS. Word on the street was that the sense of community, which was very strong at SMCS, carried over and was present throughout the USMC community. Upon arrival, [I found] this was very much so the case. Today, I am Head of Volunteers for the Inspire Conference 2018, as well as a Senior Mentor in the USMC Connect program. Without a doubt, had I not been so comfortable being a part of the USMC community, I would not have accomplished what I have here, today. USMC felt like home.”

Adam Nangini (SMCS ’15, USMC ‘19): “I chose to attend USMC from SMCS because at SMCS the community was strong and supportive and I figured that since that was such an integral part of my growth as an individual in high school, that I would seek to continue that in university.”

Continuing tradition is also important to current female students at USMC, such as Julia Hookong-Taylor, who attended Loretto Abbey Catholic Secondary School, a religious order that worked with the Basilians to form a co-educational university college.

“Looking back on the decision I made — I was largely influenced with the experience my brother had at his high school, St. Michael’s College School,” said Julia. “I wanted to find the closest thing to the sense of community I saw there. I think it’s interesting that even though one school is private and one is public Catholic, they both seemed to share similar core values and aims, probably due to their corresponding religious orders being so closely linked. When it came time for university, [USMC] seemed like the right fit; something familiar that could be an extension of the tight-knit communities I have come to appreciate and cherish about these institutions.”

Finding Tradition at the Registrar’s Office

I also had the privilege of interviewing Giancarlo Mazzanti (USMC ’84), our new Registrar and Director of Student Services here at USMC. Mazzanti previously worked at SMCS for 32 years, and has now returned to USMC. He described his experience working at USMC as a “going home” personal celebration.

“St. Basil’s Church (Toronto). View from the southwest taken outside a board fence on St. Joseph Street. The roof line shows where the addition was made to the south. Left background shows sacristy with kitchen for St. Michael’s College. St. Basils Church in 1889. Notice the new roof on the extension which Father Brennan had just finished. The wing at the rear was demolished in 1922.” (Photographs Collection, Item: 1886.3, USMC Archives, USMC.)

“There is something appealing about going home,” said Mazzanti. “And this was home. And when I look at the people that surround me in my life today, I met the vast majority of them in Brennan Lounge, or in my political science classes. These are the people that became my kind of life circle, people who are the godparents to my kids, so I came back here because I felt a real strong sense of community when I was here, and I was hoping to get that same feeling coming back after such a long period of time.”

When asked about the Basilian intent, Mazzanti said that, “Their mark has been felt in high school and university levels in this country. We’re going to try to be a good home to any student who wants to join this community.”

Mazzanti’s statement, when asked about his hope for the future alumni of USMC, whatever walk of life they come from is: “There’s great value going into a college like St. Mike’s that has a really strong sense of community, camaraderie, and the sense of other as being important. The sense that they’re supported by not only professors, the student services, but other students. There’s a nice sense of community and that people are working with each other and not going through this alone.”

“I hope that beyond the top-level world class education, students leave here with the sense that they were part of the community, a community that cared for them, and a community that will continue to care for them and their children,” he continued. “There’s a real sense of being home — I feel like I’m back at home and I wish that for every student here, because it’s great.”

The Basilians, in part, through St. Mike’s and its connected institutions, have had a remarkable, intergenerational impact on thousands of families.

Through education, and centres of learning like USMC, SMCS, and now HNMCS, they have provided guidance and support to innumerable students from across not just the Greater Toronto Area (GTA), but also the world. In the process, they’ve helped to transform young, enthusiastic student minds into great leaders — regardless of gender, race, or religion. Their door is and will continue to be open to all.

This is why many of us lose our voices during Orientation Week chanting the “Hoikity Choik,” “Bubbaloo,” and many other chants. This is why whenever people ask what USMC is like, we are quick to refer to our tight-knit sense of community. This is home. Home is St. Mike’s. This is our USMC.