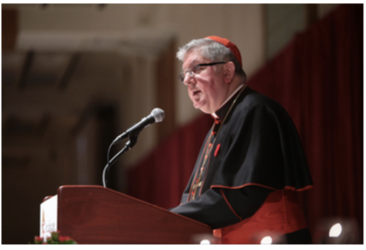 Photo: Cardinal Collins addresses the crowd (The Archdiocese of Toronto).

Imagine this: 1,700 people from across the Greater Toronto Area (GTA) gather at the Metro Toronto Convention Centre (MTCC); people from all different backgrounds, professions, vocations, and walks of life. What you are picturing is the 38th Annual Cardinal’s Dinner, which I had the honour of attending along with a number of other students and faculty representing the University of St. Michael’s College (USMC). The Cardinal’s Dinner is an annual dinner hosted by His Eminence Cardinal Thomas Collins, Archbishop of Toronto and Chancellor of USMC, in the name of the Archdiocese of Toronto.

Year after year, the occasion seeks primarily to promote fellowship within the broader community, which includes other groups outside of the Catholic Church in Canada. Its other, and perhaps better-known goal, is to fundraise for charities. Over the years, it has raised over $6 million for various charities across the city.

This year’s Master of Ceremonies was USMC President and Vice-Chancellor David Mulroney, who was honoured for his service to USMC as his term soon comes to a close. Also in attendance with the USMC delegation was Vice-President and Principal Randy Boyagoda, along with other college faculty, Commuter Dons, and members of the new SMC One course, The Gilson Seminar (to which I belong). Throughout the evening, various remarks were delivered by politicians such as Ontario Premier Kathleen Wynne, Mississauga Mayor Bonnie Crombie (a proud USMC alumna), and Marco Mendicino, Member of Parliament for Eglinton-Lawrence. Each spoke about the importance of a community which seeks to aid the impoverished and the commitment of the government toward doing so.

Although this should ideally be the aim of every level of government, it is worth noting that this is not always the case. It is for this reason that Cardinal Collins spoke of a certain contradiction in our society, which he said beholds an “intolerance of tolerance, in which the free and respectful exchange of differing ideas, upon which a healthy society depends, is abruptly terminated with the excuse that we are all too fragile, like snowflakes, to engage in a courteous encounter with viewpoints that differ from our own.” He continued on, saying that “our society is poorer for that.” In addition to this, the Cardinal discussed the sanctity of human life, with emphasis on the “cold shadow of euthanasia.”

In reflecting upon his 10 years as Archbishop of Toronto, he called attention to the four guiding principles of the Archdiocese’s pastoral plan. He encouraged the faithful to live vibrant lives in service of one another, reaching out to those in need and evangelizing our culture. The Cardinal’s speech highlighted the various charitable works of the Church, including that of healthcare and education. Special recognition was also given to USMC in its contribution to higher Catholic education.

Now perhaps you have read this far and are now thinking to yourself, “This is all well and good, a fancy dinner full of religious individuals applauding the contributions the Church has made. But how is this relevant to me?” And perhaps you think it is not, but I’m here to tell you that it is. Because the Cardinal’s message was not just for those in attendance, nor was it just for members of the Church. It was for all of us. If there is one thing that should be taken from the dinner it should be this: it is necessary for leaders in the Church and government (and even leaders in our society, such as you, the reader) to speak on the importance of charity, but it means very little if their actions do not reflect their words. The same goes for each of us. We live in a dark society that is desperately in need of the love of Christ. We are called to live a life of faith and action, bringing the love of Christ to each person we meet. To each St. Mike’s student reading this, it is my hope that we can prove ourselves worthy of the Cardinal’s praise by living as faithful stewards in service of one another and a greater good.