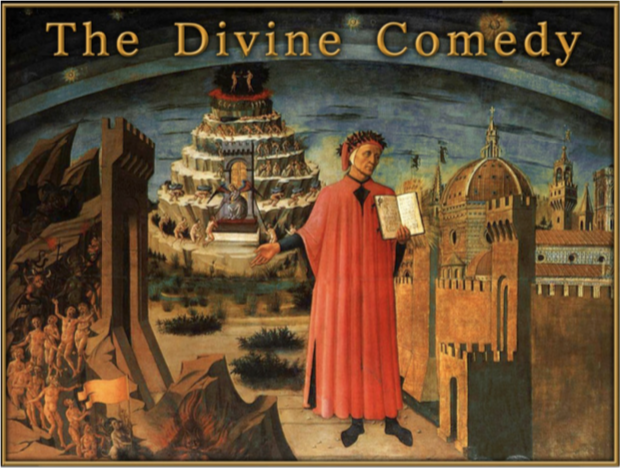 Responses to Dante’s poetic masterpiece through the lens of art

The latest exhibition at John M. Kelly Library started off in style — on November 16, Dante’s Journey Through the Visual Arts officially opened with a presentation and reception that left little doubt of the enduring appeal of Dante Alighieri’s Divine Comedy.

The presentation, held in Alumni Hall, featured an introduction by none other than Cardinal Thomas Collins in which he warmly endorsed the wisdom, beauty, and truth that is to be found in the Divine Comedy; and made it clear that we can all appreciate some Dante in our lives. The Cardinal also stressed the illuminating power of the poem and its importance as a guide. He stated that, for him, it has the power to help us go through this world that is so often “a dark forest,” a reference at the start of Dante’s visionary journey to Hell and back — literally.

Henrike Lange — Assistant Professor of Italian Renaissance Art, Architecture, and Literature at the University of California, Berkeley — took the audience through both a visual and literary experience of the poem in her presentation “Seeing Dante Reading.” She focused on the visual landscapes throughout the Divine Comedy and how they engage readers’ imaginations as well as providing them with the experience of walking with Dante as he delves deeper and deeper into Hell — guided first by the great pagan poet Virgil and then by the love of his life Beatrice through Hell, Purgatory, and ultimately to God in Paradise.

Lange also focused on humanity’s evolving response to Dante through the medium of art, as the evocative landscapes woven into the poem have inspired countless artists over the ages to reimagine Hell, Purgatory, and Heaven in a variety of ways. Showing examples that range from the great Pre-Raphaelite artist Dante Gabriel Rossetti to works by her own students back in Berkeley, she traced Dante’s influence on the world of art as a means of speaking to how resonating and universal Dante’s work is. For despite the infused political commentary from 12th century Florentine intrigue that figured predominantly in Dante’s life, the core messages continue to have significance for people all around the world. The poignant, intense, unrequited love that he had for Beatrice and his desire to envision the after- life are but two of the themes that Lange touched upon as being universal to the human experience. There is something in Dante that any human being can identify with regardless of time, gender, race, or faith.

A further testimony not only to the enduring interest of the poem but its continuing relevance to the St. Mike’s community are Alberto and Caroline Morgan Di Giovanni — the couple through whose generosity the collection of rare books and art in Kelly Library was made possible. Both are St. Mike’s alumni, and expressed their affinity for the college and the important role it played in making their University of Toronto (U of T) experience a memorable one. Their legacy seems to have made quite an impact — for in addition to the prestigious speakers, U of T faculty, and alumni present, many current U of T students were in attendance as both event volunteers and audience members.

The reception in Kelly Library following the presentation was the official unveiling of the rare books and artwork, accompanied by refreshments. St. Mike’s Principal Randy Boyagoda and President David Mulroney were among those enjoying the various works on display. The exhibition can be found on the first floor of Kelly Library.