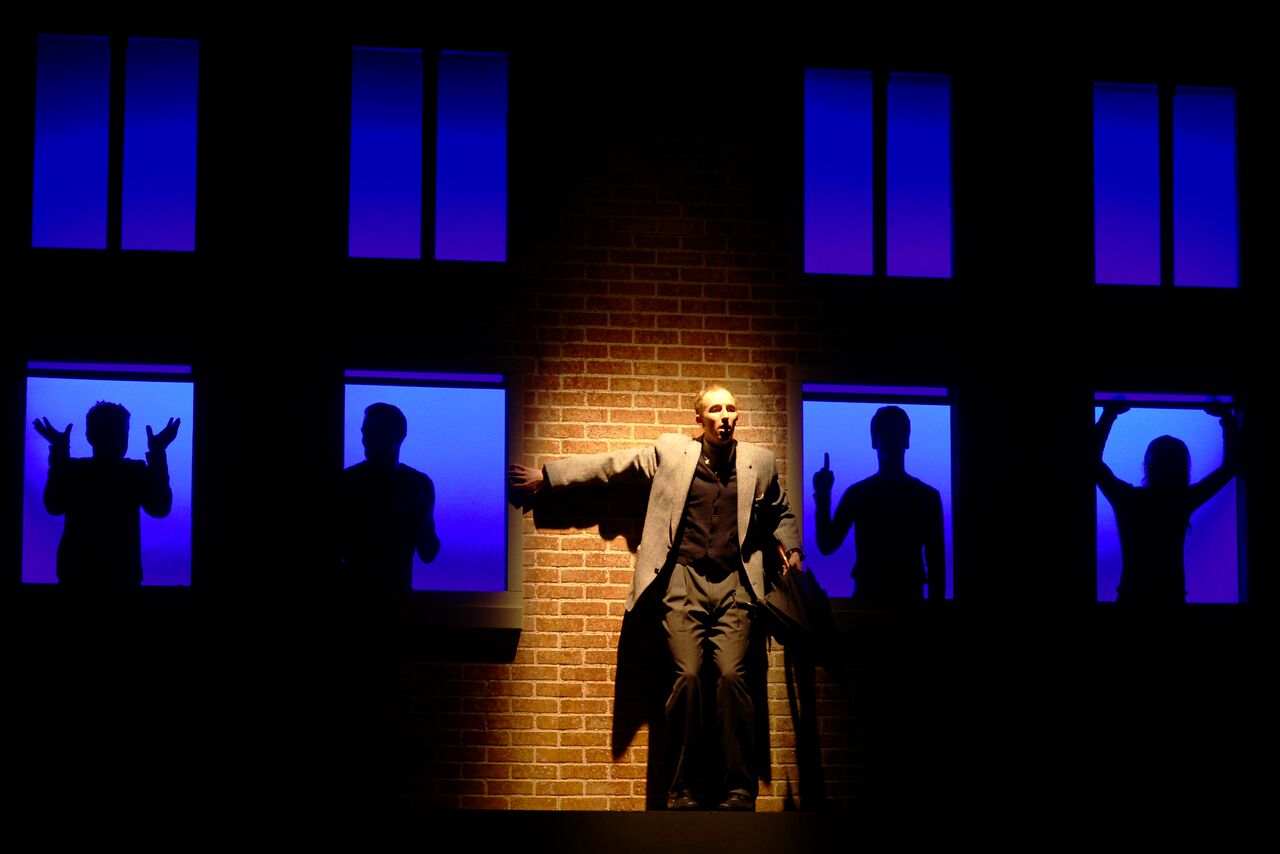 Hart House Theatre has saved the best for last and ended their season strong with 7 Stories: a genre-complicating, metatheatrical, absurdist production by Albertan playwright Morris Panych.

The action unfolds on Hart House’s most visually striking set of the season: the side of a building complete with several windows, and aided by the constant atmospheric drone of sundry city noises. It is here that we join the Man, a lens through whom we witness the outlandish lifestyles of those who live within, as he contemplates the meaning of his existence and the willful ending of it. The Man converses with 12 of these inhabitants, most of whom are too wrapped up in the complications of their lives to ask about the Man or why he is considering ending his own. Others just think he should get it over with.

The disregard for life instantly draws to mind the existential absurdity of Beckett’s Endgame. But the Beckettian elements do not end there: the Man not only finds himself in a meaningless existence but in a meaningless world, impossible to place temporally, governed by the rules of theatre, and full of self-contradiction.

Contradiction defines several of Panych’s larger-than-life characters, among them a psychiatrist slowly going insane, a misanthropic humanitarian, and a witty centenarian who fights the limitations of travel by never leaving her apartment.

It is from this old woman, meticulously inhabited by Rakhee Morzaria, who teaches the Man the essential lesson of his life: if you don’t like your story, give yourself a new one. This lesson that allows for the one of the most visually arresting moments of the season, let alone this production. The Man flies. The lights are cut, and a spotlight illuminates the Man atop a moving platform. It brings him closer to the audience as actor Brian Haight holds his umbrella open and aloft, letting it capture the wind billowing at him from below. It then redelivers him to the platform and he disappears instantaneously before the lights are switched back on: a genuine moment of How did they do that? Credit must be given to Director Rebecca Ballarin and Set Designer Jenna McCutchen for the skill and originality they brought to this production.

One must also admire the energy of the actor who can portray the turgidity, hedonism, paranoia, and general ridiculous diversity of these characters. The entire cast, with the exception of Haight who never left the stage, played two equally outrageous characters each. They disappeared into their roles, an effort inestimably aided by Costume Designer Daina Valiulis.

As is the nature of live theatre, problems do happen. When a window refused to be closed, actors Scott Kuipers and Nicole Hrgetic turned the moment into unintentional comedy. Their frenetic efforts to dislodge the window and slam it down suited their characters to a T.

Ultimately, 7 Stories imparts valuable lessons. You don’t need to live according to the narrative handed down to you if it does not agree with you. You can be redefined. You can live according to your own rules. If the hand you’re dealt doesn’t suit you, discard it and take a new one.

7 Stories ran at Hart House Theatre from March 3rd to 11th. They look forward to welcoming you to Once Upon a Time: Only Human Dance Collective’s annual dance production, which runs March 23rd to 25th, and the U of T Festival of Dance, which runs March 31st to April 1st.