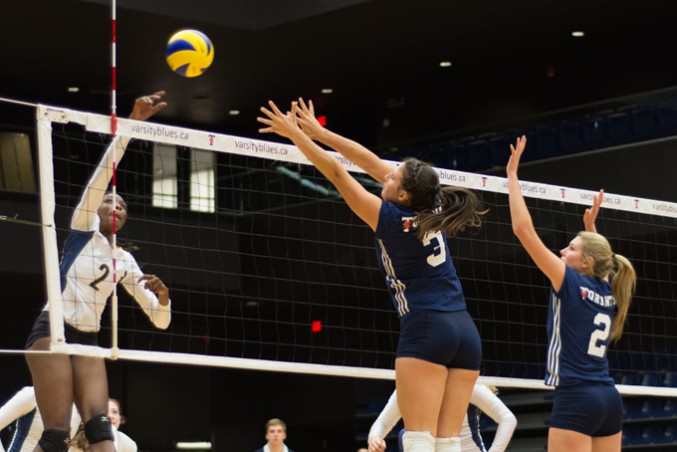 U of T women beat Ryerson at home, to take third place

Have you guys ever seen The Miracle? It’s the story of a young underdog team from a large institution facing off against a super powered team from another behemoth in the semi-final match of a tournament. Well, watching the OUA woman’s volleyball championship gave me some déjà vu, but from the vu of a Soviet fan, U of T (Canada’s academic superpower), suffered a heartbreak at the hooves of the Western Mustangs.

The metaphor is a bit of a stretch, but there’s some substance to it. The Blues had been undefeated for over a year prior to the semis. They went two whole seasons undefeated and completed a gold medal playoff run last year, and were favourites to repeat on home court this year.

After dropping the first set, the Blues bounced back to win the second set 25-17. Western took set three after starting off with five straight point on route an early 11-4 lead, and finally icing the set 25-20 as U of T mounted a bit of a comeback. U of T won set four with some strong play from setter Madelyn Mandryk, and match MVP Anna Feore hitting from the left. This led to a showdown in a tie-break fifth set, where U of T had a comfortable lead that slowly crumbled under the strength of Western’s front court. Up 14-13, U of T lost a point on some strange technicality that my colleague and I with our combined lack of volleyball experience have yet to figure out, and eventually lost 16-14 — completing The Miracle on court.

Despite the loss, the match was incredible. By the time I started to work out the rhythms of the game, I was hooked. The atmosphere was tense: the momentum swung back and forth like a broken pendulum, and my nails were chomped to a nub. When that final point landed on the U of T side, my heart bled. The Blues never quit, they always found a way to come back, and they stuck together as a team, buoyed by excellent leadership and communication from the libero, Asil Ersozoglu.

OUA Eastern player of the year and match MVP of the 3-1 bronze medal win over Ryerson, Alina Dormann is a dynamic athlete. Scoring a game high 15 in the final match, Dormann’s power and precision from the right was a sight to behold. She’s one of those athletes that, whenever the ball was on its way to her, you knew would do something special. One massive spike from her would somehow become a five-point stretch in the next two minutes. She’s an Auston Matthews, a Christine Sinclair, or a LeBron James — whenever the ball was in her control you could safely expect something unbelievable to happen.

Looking forward, I’m sure the team was unfazed by a bronze medal. They celebrated loudly after that last point against Ryerson, and took in the hometown adoration like the champions they are. Next season, the team’s makeup won’t be much different — much of the team, including Dormann, are still lower years, so, who knows? I am sure they are already looking forward to starting another undefeated season.