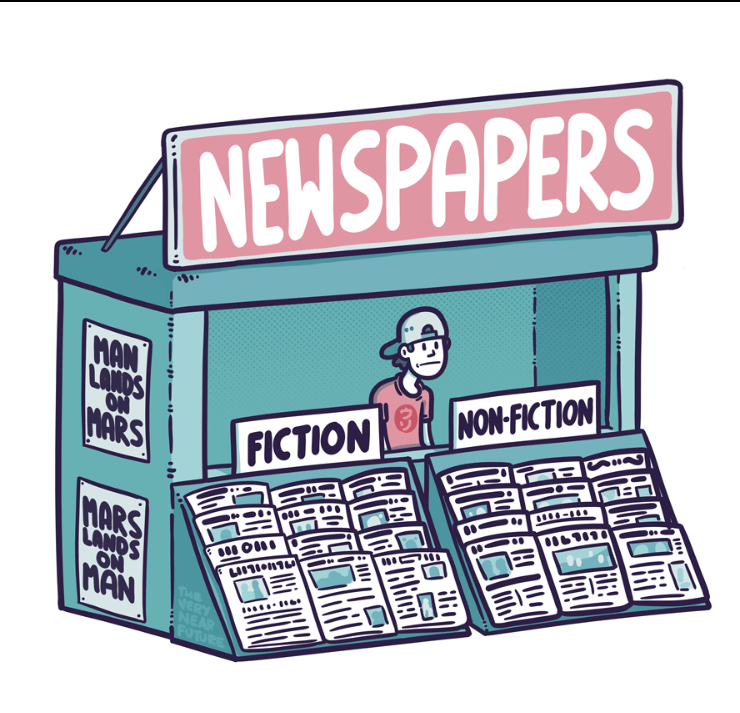 The trap that is “fake news”

As a student who gets a Course Outline in each class, I can tell you that in these outlines, one often sees the same subheadings: Course Description, Course Objectives, Required Texts, etc. The heading that teachers have come to stress the most though is the section on Academic Dishonesty, in which they emphasize both the importance of honesty, and the repercussions of dishonesty, particularly in relation to plagiarism. The emphasis placed on this is done for a good reason — honesty and truth are valued in academic institutions. These values are powerful, inspiring things that many feel must be preserved and protected. However, outside of a school setting, one might not encounter constant reminders to use true information and report this truth with as much accuracy as possible (with citations, hopefully).

The real world is not so concerned with upholding this truth: thus I present “fake news.” Not to be confused with satirical news reports, “fake news” makes a purposeful attempt to publish hoaxes, propaganda, and misleading or often completely fabricated information. Written to sound like pieces by reputable journals and formatted to appear factual, “fake news” works to pull in naïve readers and gain ad revenue from click-bait titles. Simply put, “fake news” deliberately publishes lies, often with the intention of convincing readers that they are facts. There is nothing honest about “fake news,” it produces what some have affectionately called “alternative facts” and what most have called complete lies. Regardless of how unethical it is to report fake information, one must remember that the influence of “fake news” correlates to the degree to which people believe it is true.

And boy, do people believe these stories. I can speak for a number of people when I say that it’s hard not to. Most individuals who read these false stories, often on their Facebook newsfeeds, believe them to be true. And, by clicking on that first linked title, I and other unsuspecting readers can be tricked into swallowing the lies of that website and can thus give the site its ad revenue. “Fake news” is not informative (like the regular investigative news), nor is it a funny critique on society (like satirical news). Instead, it abuses readers like myself and creates stories that draw us in without a good cause. The only way to stop “fake news” from spreading, in my opinion, is to flag or report it as fake when the opportunity comes. Facebook has recently implemented the option for users to do this for articles on their newsfeed. The International Federation of Library Associations and Institutions website suggest tips with which readers can distinguish between fake and reputable pieces. These tips include checking the story’s sources to see if they are good, checking up to the see if the author is a credible journalist, investigating if the piece is a joke, and checking the URL to see if there is something strange or unfamiliar there.

It is unfortunate that we cannot fact-check everything. If it were possible to do so, we would inevitably know which pieces are true and which are not; we might not even have to turn our essays into Turnitin, if teachers had the ability to check the credibility of our essays on the spot. But this is not the case, therefore, we must be more conscientious when choosing what to read, and choosing whether or not to believe it. Perception is a powerful thing, and when people hold onto their beliefs strongly without questioning anything, it becomes more than a little dangerous.