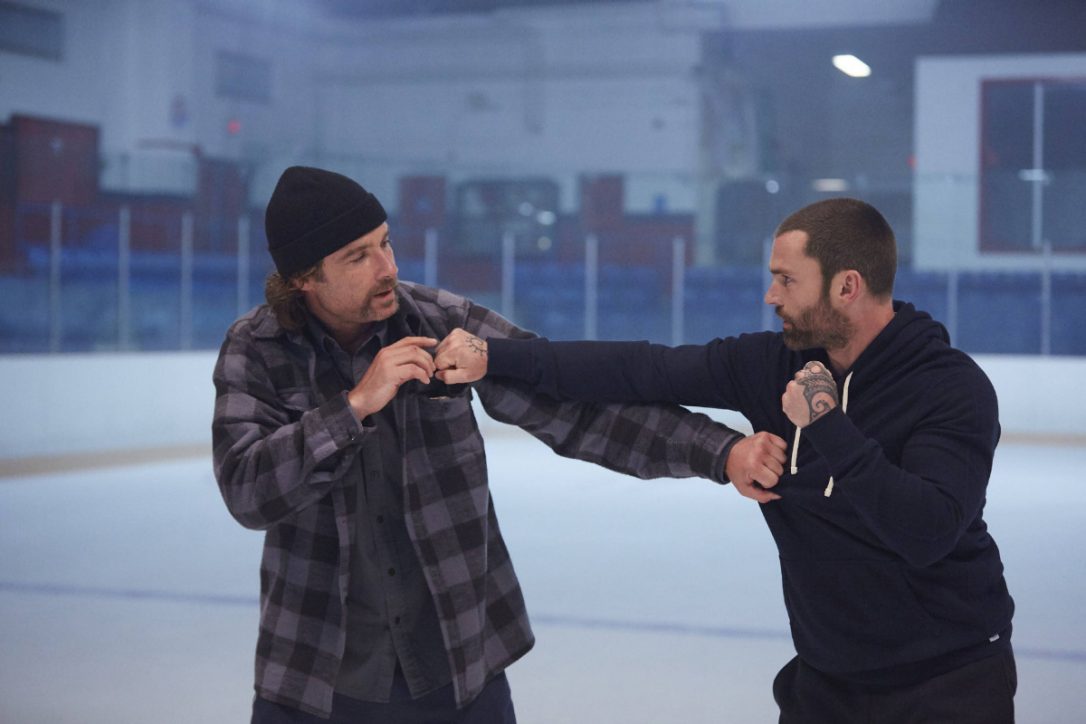 An unintentionally sombre flick about the ugly side of sports

You can’t disguise Barrie, Ontario from me by pretending it’s Reading, Pennsylvania — I’ll spot it in a second. Not only could I see that Rock 95 paint on the Zamboni in the establishing shot, but I remember when they filmed those scenes. A bunch of my buddies went over to the Molson Centre when an open call went around for extras for Jay Baruchel’s Goon: The Last Enforcer. Not only that, but growing up less than thirty minutes away from the home of the Barrie Colts, I can see through the movie’s fancy gloss and glean; then again, part of me thinks the movie knows that.

The sequel to 2011’s Goon — about the rise of an enforcer on an east coast D-league team and how he brought the team closer together by punching and being punched — delves into an uglier aspect of hockey head first, yet doesn’t want to shake the light tone of the first movie. Therefore, it’s not a great movie: the laughs stop coming as the head injuries start mounting. This has made it an interesting viewing exercise for a hockey fan who became disillusioned with parts of the game during their playing days.

In the second Goon, Sean William Scott’s Doug “The Thug” Glatt suffers a career ending shoulder injury in his first game of the season during a concussion-inducing fight with the son of his GM, Anders Cain, played by Wyatt Russell. In what follows, Glatt learns to fight with his offhand and returns to the team thanks to the help of a former enforcer, Ross “The Boss” Rhea, who suffers from serious CTE thanks to continuous brain-rattling, jump-out-of-your-seat hits and myriad face punches — so the story goes.

It’s no surprise that Baruchel’s sequel can’t find the laughs like the first one did: its subject matter is messy and ugly. It attempts to deal with aging hockey players who play roles that have become obsolete in the modern game — not just because speedier, leaner players score more goals, but because the damage enforcers do to their bodies is horrifying. Spoilers ahead: the carnage at the end of the film leaves Rhea on a stretcher after suffering one final, horrific head/neck injury, and Glatt’s arm finally cooked and face mangled after pounding the daylights out of a now toothless Cain.

The film ends with psycho-hockey-parent stand-in Hyrum Cain, Anders’ father, coming to his bruised son’s side after sharing contentious moments throughout the film. Anders tells his dad, “I hate this sport” (the second last line of the movie) as he finally had enough of the game his dad worshipped. It’s a common minor league hockey theme, I remember having my own “I hate this sport” moment with my parents, but it doesn’t lighten up the movie.

Every time Anders was on the ice in the movie you can feel his rage and his frustration with his dad and hockey, and that frustration manifests as a fury that compels Anders to prey on his teammates, to fight anyone and everyone, and to just be an overall deeply unnerving presence in a comedy film about a hockey goon. It creates a tonal whiplash as the film can’t escape the ugly side of hockey that professional leagues tend to ignore — and it makes the movie a tough watch. All the while, it captures something real and tragic about the Canadian game; underneath every Toronto is a toothless Barrie.