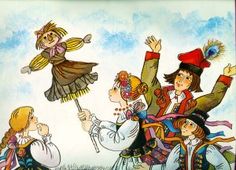 On March 21, we unknowingly celebrated the Spring Equinox, most likely only by enjoying the sun and warmth during the day as we stared out from the dreariness of our classrooms, wishing that it was summer already and that U of T’s finals, assignments, and papers were long behind us. Most of us living our day-to-day lives in Toronto are probably unaware not only of the various celebrations occurring around the world as spring is welcomed into the calendar, but also of the vast amounts of individuals in our very classes who wish they were back home to join in the celebrations pertaining to their cultures, religions, or both.

Some customs, like mine, can be off-putting to think about. Every year on March 21st, effigies of a pagan Slavic goddess are dressed up, paraded, burned, and drowned in large bodies of water. And it makes perfect sense to do so, as the goddess, Marzanna, is the embodiment of winter and death. By her symbolic ‘death,’ she returns to the underworld to be reborn again at the end of autumn. You may look at this ritual and think that there isn’t any aspect of Roman Catholicism present, and you would be right. Although Poland is notorious for its devout Catholicism, a multitude of pagan rituals are done throughout the year which the Church has been unable to cleanse out of the society, no matter how hard it tries. The Church attempted to ban the Marzanna ritual, which didn’t work, and then tried to have the effigy represent Judas instead, which also did not sit well with people. Thus, the Church eventually gave up all attempts to change the Slavic pagan way of doing things, as those pagan elements have been present in the Polish cultural conscience much longer than Christianity has. While Christianity was only introduced to Poland in 966, Slavic tribes have existed since the fifth century with their own unique belief systems and customs, many of which (like Marzanna) continue to be observed today.

It just goes to show that in our everyday lives, no matter how preoccupied we may be with our university careers, there are heavy influences of religion in our assumed customs. Going beyond the consideration of being labelled Liberal or Conservative, our Canadian society continues to differ from that of our American counterparts, which has become abundantly clear in the past few months. It is thanks to the multiculturalism that Canadians pride themselves in that our society has evolved to borrow customs from many different cultures, forming a most unique and inclusive Canadian experience for all. So next time a special day comes up in your culture or in your friends’ cultures, look with interest into how it came to be, and into the inherent traits of religion (or lack thereof) that influenced it, and into how it continues to be celebrated, and why. And who knows, you might just discover something worth celebrating yourself!