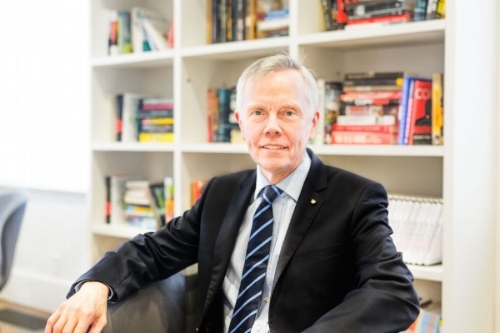 Photo: Sandro Pedhar, via the Office of David Mulroney.

University of St. Michael’s College (USMC) President David Mulroney’s recent comments at an international conference in Québec City have sparked controversy and prompted a number of USMC faculty members and staff to sign an open letter earlier this week accusing Mulroney of doing a disservice to USMC students, dishonouring USMC’s legacy, and shaking their confidence in him as President.

Mulroney’s June 19 remarks were part of a speech given during the opening ceremony of the 2017 World Catholic Association for Communication (SIGNIS) Congress at the Université Laval. (SIGNIS is an international non-governmental organization for Roman Catholic educators and communications professionals.)

In Mulroney’s speech, he blamed the USMC academic establishment for allowing the college to slide into mediocrity and become embarrassed about its Catholic identity. Mulroney also decried USMC students’ “negative” culture of excessive partying and drinking, as well as its objectification of women. To exemplify these points, he showed a short St. Michael’s College Student Union (SMCSU)-commissioned video entitled ‘Cowboys and Schoolgirls.’

“These were the great communicators of our narrative,” he added, referring to the SMCSU and its messaging.

Elsewhere in his speech, Mulroney praised USMC students and stated that he had “profound respect” for them.

22 professors, librarians, and administrators, including former principal Mark G. McGowan and long-time registrar Damon Chevrier, signed the July 31 letter (which the Toronto Star published in full on Scribd). The letter specifically challenges Mulroney’s “generalizations” about USMC students, and accuses Mulroney of using the forum to “stigmatize” them.

The letter contends that Mulroney’s comments do not accurately or fairly reflect the USMC student body at large.

It takes issue with, in particular, Mulroney’s use of “a few negative images” to “actively [promote] a clear impression of USMC students as party animals and Islamaphobes.” “We believe this is a distorted picture, and a disservice to the nearly 5,000 undergraduate students in the Arts & Science Division and over 200 graduate students in the Faculty of Theology,” the letter continues.

It concludes thus: “Your remarks, in our judgment, have dishonoured [USMC’s] legacy, and shaken our confidence in you as President.”

Mulroney’s speech also highlighted USMC’s isolated community, and chastised USMC for failing to provide a strong Catholic voice on the topic of euthanasia in Canada. The open letter begs to differ, and instead acknowledges a number of instances in which USMC students have done just that, including an open forum held by Christianity and Culture students.

It appears Mulroney does not want USMC to become, like other federated colleges, such as Trinity College and Victoria College, “aggressively secular.” Mulroney mentions specifically that certain recruitment methods have attracted more non-Catholic students and in part, have contributed to USMC’s “dialling down the salient points of [its Catholic] identity.”

According to McGowan, SMC Principal from 2002-2011, and coordinator and founder of the Book & Media Studies Program, “the letter speaks for itself.” McGowan and the other signatories take issue with the “manner in which Mr. Mulroney chose to characterize students at [USMC].”

“Since [Mulroney] made the comments and showed a clip from an off campus “party” video to an international conference, whose proceedings were being filmed and disseminated by Salt & Light Media, we thought it necessary that our defense of the vast majority of hardworking, conscientious, and gifted USMC students be made in a public manner,” said McGowan, in a statement to The Mike.

McGowan continued: “Those of us who work daily with students in the classroom, the library, and in co-curricular activities, know full well the sacrifices students make when they come to university; the struggle many have in balancing work, school, and family; and their many successes that often go unheralded. Our letter signaled our public support for our students and alumni.”

This comes a month after Mulroney reiterated his intent to step down as President in June 2018. (He was appointed by the Collegium in June 2015 for a three-year term.) The search for his successor is underway.

This was also not Mulroney’s first time publicly criticizing USMC student groups: in September 2016, Mulroney declared his plan to reform USMC’s relationship to SMCSU, The Mike, and the St. Michael’s College Resident’s Council (SMRC) in an article on the university’s website entitled ‘Two Solitudes No More.’