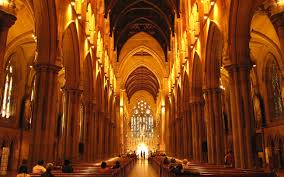 The communal value of religion

In his commencement address to the 2005 graduating class of Kenyon College, writer David Foster Wallace emphasizes the importance of faith and the falsity behind atheism. According to Wallace, “Everybody worships. The only choice we get is what to worship.” He explains the evils behind worshipping tangible things like money, beauty, or intellect. The consequence of these false beliefs is that you will never have enough; perpetually plagued with the feeling that your life is missing something. If you place meaning in your life on the tangible, your life will lack meaning and purpose. However, if you choose instead to have faith in a religion, you will discover newfound meaning and a greater sense of fullness in your life. No matter what system of faith it may be, choosing to be a follower of a religion can help you discover your true purpose.

When Samuel Beckett’s tragicomedy Waiting for Godot was first performed in France in 1953, it was initially regarded as an inauspicious play, bewildering its audiences. Over time, it has developed into one of the most meaningful plays of our time, a play that speaks to all of us who are lost and searching for meaning and purpose in our lives. It tells the story of two men, Vladimir and Estragon, who are in a desperate state, homeless and adrift with nothing but each other. Together, Vladimir and Estragon find hope in a hopeless world, believing that Godot, or God, would eventually come. And while Godot never actually comes and the two men seem as if they are wasting their time, their longing for Godot gives them hope. But above all, it gives them purpose. Their purpose is not necessarily waiting for Godot, but rather, it is being there for one another. Vladimir and Estragon’s faith in Godot unites them and keeps them alive. Multiple times throughout the play, Vladimir and Estragon contemplate hanging themselves, but they never go through with it because of their hope in Godot’s arrival. They believe Godot will save them, but they actually save themselves through their heartfelt care for one another. Through their faith in Godot, Vladimir and Estragon developed friendship and unity that is hard to come by in reality.

Unity is sparse in today’s divided world. It seems as if there are more things separating human beings than bringing us together. This is true not only worldwide, but especially in our local communities where societies are divided due to various factors such as economic standing, race, or religion. Therefore, it is up to us to overcome these dividing factors and recognize that despite our differences, whether the differences are physical, mental, or spiritual, we are all human beings. Dr. Martin Luther King Jr. once declared, “We must live together as brothers or perish together as fools.” And while religion may seem like a dividing factor, it can also demonstrate unity and peace amongst us, bringing people together in a way that nothing else can. People turn to religion for various reasons, whether for support in times of hardship, or guidance when we feel lost. And while we may be looking to some sort of God or divine creature for these things, we are also looking to those around us who share our faith. Whether it’s a church, a mosque, a synagogue, or wherever you go to practice your faith, look at those people surrounding you and remember that in sharing faith you are sharing something greater: a sense of support and strength, a reminder that you are not alone.