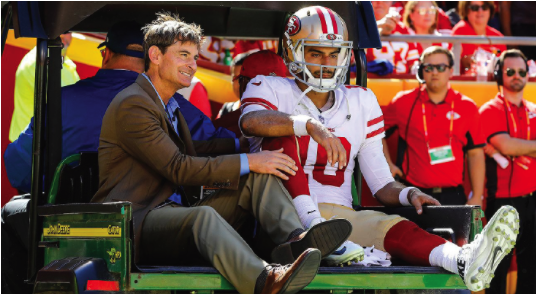 Why Garoppolo’s torn ACL is bad news for the 49ers

On September 23’s game against the Kansas City Chiefs, San Francisco 49ers starting quarterback Jimmy Garoppolo suffered a torn ACL in his left knee. He sustained the injury while completing a 13-yard run. During the tackle, Garoppolo planted his left leg, and his left knee appeared to buckle. He was carted off the field shortly after. Results were released indicating the 26-year-old quarterback would not return for the rest of the season. With this news, a once hopeful season for the San Francisco 49ers turned into another inevitable losing record.

Garoppolo was signed to San Francisco on a five-year, $137 million deal in February 2018. He showed great potential last season with the New England Patriots while substituting for a suspended Tom Brady. Garoppolo was supposed to be the saviour of this once great franchise, going into the season with a 6–1 record as a 49er. However, his injury means the 49ers will have to rely on second-string quarterback C.J. Beathard, who is, to put it nicely, not the best quarterback in the league. With more career interceptions than touchdowns thrown, the new starting quarterback spells certain doom for San Francisco and the rest of its season.

In addition to Garoppolo’s injury, the 49ers lost their starting running back Jerick McKinnon, who also sustained a torn ACL in the preseason, and their cornerback Richard Sherman, who sustained a strained calf and is expected to miss a couple weeks.

However, while these other injuries hurt, there is nothing more devastating for a team than losing its quarterback. The quarterback is the most important position in football. Besides the fact that every play on offence starts with the quarterback, he is often also the one calling offensive plays, reading defenses, and making audibles. A quarterback is akin to an on-field coach.

Winning teams tend to have good quarterbacks, just as losing teams are often lacking at the position. For example, the team with the best record in the league last year, the New England Patriots, have arguably the best quarterback in the NFL in Tom Brady. To contrast, the worst team in the league last year, the Cleveland Browns, went through multiple starters at the position. Every quarterback the Browns played last year, such as Kevin Hogan and Cody Kessler, were career backups

Losing the starting quarterback has not bode well for teams in the past, and this will most likely be the case for the 49ers this season. Expect a bumpy road for the 49ers as they attempt to navigate the next 12 games with a backup quarterback.